Do the Movies Have a Future?

The first of a four-part series 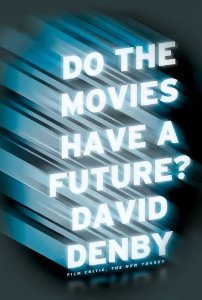 In his new collection of essays addressing the art and the business of the entertainment world, New Yorker film critic David Denby expresses a deep concern about the decline of the artistic preeminence of films in the face of new technology and a new Golden Age of television. He covers too much fascinating ground to do justice to here; but at the heart of his book is an intriguing question: Do the Movies Have a Future?

Denby laments the waning vigor of a cinema that matters – movies like There Will Be Blood, The Diving Bell and the Butterfly, and The Tree of Life. That vigor is threatened by “the way the business structure of movies is now constricting the art of movies.” Sure, Hollywood studios halfheartedly get behind the usual rom-coms, horror flicks, and thrillers; but for the most part, their business model depends on massively-budgeted but shallow spectacles. The problem is that the big profits from those blockbusters don’t get steered toward more adventurous projects; they go instead into the next sequel or franchise.

As an example, he notes that 2010’s Transformers: Dark of the Moon, which he calls “a thundering farrago of verbal and visual gibberish,” grossed $1 billion worldwide in a month: “Nothing is going to stop such success from laying waste to the movies as an art form.”

It doesn’t help that international audiences now account for two-thirds of box office receipts. Denby feels that this makes studios gun-shy about making their movies about anything. “Aimed at Bangkok and Bangalore as much as at Bangor,” Denby writes, “our big movies have been defoliated of character, wit, psychology, local color.” He cites director Christopher Nolan’s Inception as an example of “a recent trend in which big movies have been progressively drained of meaning.”

Technology too is contributing to film’s slide toward irrelevance. Pointing to an over-reliance on CGI, Denby says that “the fantastic is chasing human temperament and destiny – what we used to call drama – from the movies.” He worries that a new generation of audiences raised on effects-driven fare “will be so hooked on sensation that anything without extreme action and fantasy will just seem lifeless and dead to them.”

Meanwhile, television has been siphoning audiences away from moviehouses. The New York Times drove that point home when it asserted that recent Oscar contender Argo “had about 7.6 million viewers through [its first] weekend. If interest holds up, it may eventually match the one-night audience for an episode of Glee.”

Do films have the cultural impact that they used to? The NYT stated recently that “the prospect that a film will embed itself into the cultural and historical consciousness of the American public in the way of Gone with the Wind or the Godfather series seems greatly diminished in an era when content is consumed in thinner slices, and the films that play broadly often lack depth.” Meanwhile TV series like Mad Men and The Sopranos, which one reviewer once called the last great artwork of the 20th century, are burrowing into that shared cultural consciousness.

Denby concedes that “many people have suggested that TV, not movies, has become the prime place for ambition, for entertainment, for art… But there are risks that an artist can’t take on television.” Considering such daring contemporary TV fare as Breaking Bad, however, the small screen no longer seems to be inhibiting big risk. More on that in my next installment.

Denby’s book concludes that the future of film depends on whether the studios return to modestly budgeted but culturally powerful movies. “If they don’t build their own future,” he warns, “they’re digging their own graves.”

Next: The Revolution Was Televised