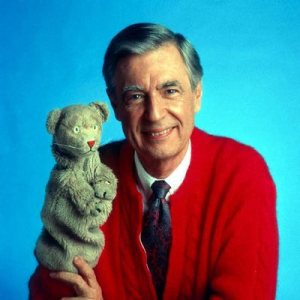 Not long ago PBS and its Sesame Street icon Big Bird became a political football as the presidential election contest heated up. Overshadowed by that controversy, two other PBS icons who passed away years ago were recently memorialized in video “mashups” that beautifully capture their unique, gentle personas – children’s show host Fred Rogers and painting instructor Bob Ross.

On June 7, PBS released the video tribute to one of their most beloved TV shows, Mister Rogers’ Neighborhood. To date, the “Garden of Your Mind” has well over seven million views on PBS’ YouTube channel. On the heels of that success, PBS followed up in late July with a similar mashup of Bob Ross and his show The Joy of Painting called “The Happy Painter,” which has garnered over three and a half million views (a third, celebrating cooking giant Julia Child, has over one million hits thus far). Both respectful musical tributes (and Child’s) are the work of John D. Boswell of melodysheep.

For decades, the half hour Mister Rogers’ Neighborhood was a place on the TV dial where parents could entrust their preschool kids to the soft-spoken Rogers, in his familiar canvas sneakers and zip-up cardigan (one of which now actually hangs in the Smithsonian). He encouraged children to cultivate their intellect, imagination and curiosity, and to explore the world around them with confidence. He addressed them directly, gently, and reassuringly about issues like fear and anger.

The Joy of Painting was an instructional show in which the beatific and welcoming Ross would, in barely twenty astounding minutes of real time, turn a blank canvas into a soothing wooded pastoral, a warm ocean sunset, or a majestic mountainscape, dotting it with “happy little clouds” and making sure to give a lonely tree a “friend.” “We don’t make mistakes,” the Afro-headed Ross would encourage viewers in his hypnotically soothing baritone – “we just have happy accidents.”

The two men exuded a degree of kindness, serenity, humility, and sweetness that is so uncommon, not only on television but in real life, that it’s almost comical; and indeed, they were easy targets for parody and ridicule in our Age of Irony and Snark. Their quiet, old-fashioned simplicity is utterly absent from TV now, and sadly may never be recovered.

Many years after the fact, Ross and Roger’s impact on viewers remains incalculable; the many thousands of responses to the videos testify to that. “They make me want to create and learn so much,” commented one viewer about Ross and Rogers. The videos themselves resonate with the fans, too. “This song is like a cure for depression,” said one about “The Happy Painter.” “What a sweet, lovely tribute to a man with a beautiful soul. I miss him so much.﻿” Another wrote, “I suddenly feel﻿ like doing something awesome with my life.”

The Joy of Painting was on the air from 1983 to 1994, but is still seen in reruns. Mister Rogers’ Neighborhood ran from 1968 to 2001. Ross died in 1995 at the tragically young age of 52, and Rogers died in 2003. The world is poorer for the loss, but those who were touched by them – and our numbers are legion – are all the richer for the experience. Rest in peace, gentle men.