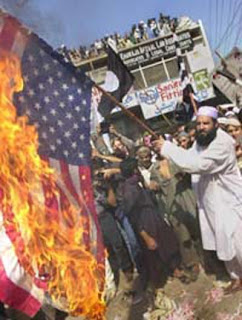 When Barack Obama took over the Oval Office from George W. Bush in 2009, he was riding the crest of a tidal wave of gullibility among his supporters, who believed him to be the Chosen One bringing salvation and deliverance from the wasteland of the Bush years. In their fevered imagination, the inept, moronic, old-fashioned cowboy Bush had disastrously bungled his terms in office and caused the world to hate us. Now the multicultural, transnational, post-American demigod Obama had arrived, a deus ex machina from the heavens, offering hope and change to all. He was going to get the world to like us, really like us again.
But this self-delusional, media-assisted narrative has a tragicomic twist: two and a half years into his term, Obama not only hasn’t healed the oceans, harmonized the races, boosted the economy, or repaired our supposedly tattered reputation abroad, he has actually exacerbated all those issues. And now it’s confirmed that he hasn’t been any more successful at resolving the clash of civilizations either.


“My job to the Muslim world,” Obama said in his very first interview as President, for the Arabic-language network Al-Arabiya, “is to communicate that the Americans are not your enemy.” In that case, to quote from Cool Hand Luke, what we’ve got here is a failure to communicate. According to a stunning new poll of six Arab nations – , , , , the , and – by the nonpartisan Arab American Institute, the is viewed even less favorably in the Arab world today than it was during the final year of Bush’s administration.
Obama himself is even less popular in the region than apocalyptic Iranian madman Mahmoud Ahmadinejad. In fact, the policies of are actually viewed more favorably by the polled countries than those of the So much for any strategy of enlisting the region’s support in isolating the Iranian regime. Ten percent or less of Arabs in all the countries surveyed agree with the policies pursued by President Obama. His ratings are by far the lowest of the other world leaders listed in the survey, which include ’s ’s Ahmadinejad, even ’s raging Islamist Erdogan.
Interestingly, the two issues on which the Obama administration has expended considerable energy –“engagement with the Muslim world” and “the Palestinian issue”– have garnered the lowest approval ratings: less than 9%. Despite Obama’s assurances that Islamic extremism would dissipate once the people of the Arab world achieve economic equality, that issue is last on the Arabs’ list of concerns (apart from “’s interference in Arab affairs”). They consider the two greatest threats to peace and stability in the to be “ interference in Arab affairs” and, unsurprisingly, the mythical “continuing occupation of Palestinian lands.” This latter issue ranks highest in importance to the Arab respondents, and widespread disillusionment in the region has resulted from Obama’s failure to make progress on it – presumably because that pesky hasn’t yet been wiped from the map.
Obama’s current plunge from favor follows an initial optimistic spike in the polls when he took office. At that point, the Arab world was skeptical but hopeful about his ability to follow through on his grand promises and to reverse ’s course under Bush. (To the hardcore Islamists, however, is the “Great Satan” and that’s that; it is therefore irrelevant to them who occupies the White House.) Since then, a whopping 99% of Lebanese feel Obama hasn’t lived up to his soaring, telepromptered rhetoric. 94% of Jordanians agree with them, as do 90% of Egyptians, 88% of Moroccans, and so on.
So, far from patching up our differences and ushering in a new era of rapprochement, Obama has the Arab world hating us more now than during Bush’s reign. This, despite his many verbal overtures of respect toward Muslims and Arabs. Despite his worldwide apology tour. Despite his famed Cairo speech of June 2009, which the willfully blind believed would be an historic watershed moment in East-West relations. Despite his bow of dhimmitude to the Saudi King. Despite his alienation – if not abandonment – of our crucial ally . Despite his legitimization of the Egyptian Muslim Brotherhood. Despite the much-vaunted Arab Spring, a rash of revolutions which the naïve media saw as the blooming of pro-American democratic movements throughout the Middle East, and which some say were inspired by Obama’s Cairo call for freedom.
Where did the Chosen One go wrong? According to the poll, attitudes toward Obama and the United States as a whole have been growing increasingly negative over the past ten years due to: the American occupation of Iraq, which Obama promised to end but has not; outrage over Guantanamo Bay, which Obama promised to close but has not; continued frustration over the Israeli-Palestinian conflict, which Obama assumed he could solve but has not; and (to a far lesser degree) his own recent military involvement in Libya. It hasn’t helped matters that Usama bin Laden was taken out by Seal Team Six on Obama’s watch; considering how often we hear that bin Laden and his ilk represent only a “tiny minority of extremists,” his death at the hands of American heroes curiously seems to have angered much of the Arab world.
In essence, Obama’s outreach to Arab hearts and minds has been, as the pop culture expression goes, an “epic fail.” Pollster James Zogby describes that failure simply: “It’s because expectations were created that were not met.” Unmet Expectations – that Dickensian-sounding title neatly sums up the story of Obama’s entire presidency thus far, whether viewed from the Arab world or here at home.
(This article originally appeared here at FrontPage Mag, 7/20/11)
at 11:18:00 PM