Jane Fonda: “I Have Never Done Anything to Hurt My Country” 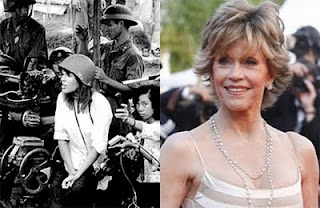 Last Saturday, actress-turned-fitness guru Jane Fonda was to appear on the shopping TV network QVC to peddle her new lifestyle book Prime Time, until the channel suddenly canceled her appearance. In response, Fonda wrote an angry opinion piece for the showbiz website “The Wrap,” explaining that “The network said they got a lot of calls yesterday criticizing me for my opposition to the Vietnam War and threatening to boycott the show.” (QVC issued a statement that answered Fonda’s comments only by noting that such scheduling changes happen often and unexpectedly on the network).
Fonda was “deeply disappointed that QVC caved to this kind of insane pressure by some well funded and organized political extremist groups.” Perhaps the actress in Fonda can’t resist the melodramatic wording, but a threatened boycott on the part of some QVC viewers does not constitute “insane pressure.” Threats of murder and mayhem from Islamists against Comedy Central’s South Park creators, yes; a boycott against a prominent actress always able to command a megaphone, no. Surely such a successful anti-war activist as Ms. Fonda was in one of her previous lives understands that a boycott is a perfectly fair and reasonable form of protest. It’s curious that she is so irked by one, since she boasts that “threats of boycotts are nothing new for me and have never prevented me from having best-selling books and exercise DVDs, films, and a Broadway play.” If boycotts have no effect on her success, then why the outrage? Perhaps it has less to do with book sales and more to do with what she dismisses as “far right lies.”


She doesn’t name these “well funded and organized political extremist groups” or provide evidence that a concerted effort was behind the phone calls to QVC. But labeling her complainants thusly and as “far right” is an attempt to marginalize them. Her suggestion is that she was “astroturfed,” in Nancy Pelosi’s term, by moneyed, extremist organizations, rather than by individual citizens expressing genuine disapproval of Fonda for what many consider to be a traitorous past.
“Bottom line,” Fonda continues, “this has gone on far too long, this spreading of lies about me! None of it is true. NONE OF IT! I love my country. I have never done anything to hurt my country or the men and women who have fought and continue to fight for us.” Since she doesn’t specify what lies she’s referring to, it’s difficult to refute her claim that none of them is true – which is precisely why she is purposefully vague about them. So let’s recapitulate her own lie instead, that “I have never done anything to hurt my country or the men and women who have fought and continue to fight for us.”
As is well-known (though Fonda would prefer not to be judged for it), in the early ‘70s the privileged Hollywood star Jane Fonda preached communism to college students and was a rabid anti-military and anti-war activist, calling the Vietnam War “U.S. imperialism” and “white man’s racist aggression.” In the summer of ’72, while the war still raged, the actress traveled to and played the part of their puppet with Oscar-winning commitment. She posed grinning with our enemy for pictures on an anti-aircraft gun that had been used to shoot down American planes. She volunteered to carry out radio propaganda from , telling American pilots that they were war criminals and urging the South Vietnamese soldiers to desert. And, arguably most reprehensibly, she met with tortured American POWs in another scripted propaganda performance, lectured them about carrying out genocide against the Vietnamese, and returned to tell the world that these guests of the Hanoi Hilton were being well-treated and they regretted their warmongering. (The book Aid and Comfort details her shocking lies and actions and how they helped undermine us in the war effort, and it marshals the evidence for indicting Fonda for treason.)
“When stories about the torture of POWs later surfaced,” John Perazzo notes,
Fonda called them lies. When the POWs began coming home in 1973, Fonda derided them as “liars, hypocrites, and pawns,” dismissing any charge that they had been brutalized: “Tortured men do not march smartly off planes, salute the flag, and kiss their wives. They are liars. I also want to say that these men are not heroes.”
“I have never shied away from talking about this as I have nothing to hide,” Fonda claims proudly in her Wrap editorial. Not true. Fonda’s own autobiography gives her Vietnam-era actions miniscule shrift, and, as with the POWs then and the QVC boycotters now, she simply brands anyone who haunts her with the truth as a liar.
Some would say that Fonda’s actions were decades in the past, and that her critics should forgive and move on. But there should be no forgiveness without repentance, and it’s clear from her Wrap editorial that Fonda not only still refuses to acknowledge the depth of her betrayals, but still labels those critics liars and political extremists.
And she persists in her blame-America-first anti-war activism. In “A Hate-America ‘Peace’ Rally,” John Perazzo reported that Fonda came out of protest retirement and was “the sentimental favorite” at a 2007 anti-war protest in , which featured a parade of speakers faulting for all poverty, war, and racism. At that protest, Fonda once again complained about “the lies that have been, and continue to be, spread about me” before joining in with the other speakers lying about the war in . She is a supporter of the radical anti-war group Code Pink and calls Jodie Evans, its co-founder, a “dear friend.” Evans and Code Pink today are serving even more aid and comfort, literally, to our enemies the Taliban, Hamas, and , than Fonda did to in her day.
“I do not understand what the far right stands to gain by continuing with these myths,” Jane Fonda muses disingenuously in her Wrap article. What your critics “stand to gain” from upholding the truth – not “myths” – about your subversive past, Ms. Fonda, is this: preserving the historical record from your self-serving revisionism, honoring the memory of our servicemen who suffered so horribly in captivity or died at the hands of your Communist friends, and exposing your unconscionable and unrepentant complicity with the enemy.