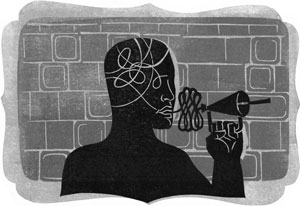 Here's the read of the day, an insightful piece by Neal Gabler who, like Neil Postman (Amusing Ourselves to Death

) and Marshall McLuhan (The Gutenberg Galaxy

) before him, has written about the ways in which technology alters our consciousness. Gabler is responding to Facebook creator Mark Zuckerberg's announcement of a new form of messaging.


Gutenberg's Revolution transformed the world by broadening it, by proliferating ideas. Zuckerberg's Revolution also may change consciousness, only this time by razing what Gutenberg had helped erect. The more we text and Twitter and "friend," abiding by the haiku-like demands of social networking, the less likely we are to have the habit of mind or the means of expressing ourselves in interesting and complex ways. That makes Zuckerberg the anti-Gutenberg. He has facilitated a typography in which complexity is all but impossible and meaninglessness reigns supreme. To the extent that ideas matter, we are no longer amusing ourselves to death. We are texting ourselves to death.

Postman... believed that a reading society was also a thinking society. No real reading, no real thought. Still, he couldn't have foreseen that a reading society in which print that was overwhelmingly seamless, informal, personal, short et al would be a society in which that kind of reading would force thought out — a society in which tens of millions of people feel compelled to tell tens of millions of other people that they are eating a sandwich or going to a movie or watching a TV show. So Zuckerberg's Revolution has a corollary that one might call Zuckerberg's Law: Empty communications drive out significant ones.