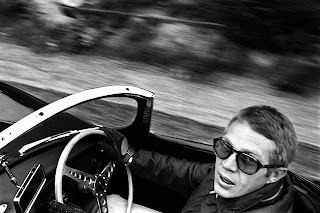 I just read a short piece by Steve McQueen

biographer Marshall Terrill called "Ten Things You Don't Know About Steve McQueen," but I did know seven of them. A couple of years ago I was commissioned by a successful producer to write a script about McQueen called The Cooler King, and I did extensive research about the "King of Cool," including Terrill's book

, all of which was eye-opening and fascinating. I finished the script but the movie never got off the ground thanks to a competing project by McQueen's ex-wife.

McQueen is - I mean was, but somehow he still seems alive - famously charismatic and charming, but many people don't know what a repellant character he was: incessantly unfaithful, a substance abuser (of practically every substance), mean-spirited, and almost insanely insecure. I'm disappointed my script went nowhere, but I still fantasize about inserting McQueen, or at least my take on him, as a character into some other project. He's too unique and compelling to let go of.
at 5:18:00 PM