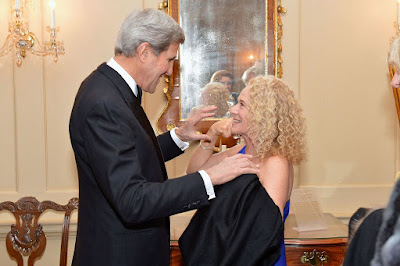 In a fundraising email currently being distributed by the campaign of empty-suit Democrat presidential nominee Joe Biden, legendary singer-songwriter Carole King has been recruited to plead with potential donors to contribute to the effort to “BEAT TRUMP by the wide margin we need!” The margin must be wide, you see, because President Trump has what King claims is a “history of lying and cheating his way to victory,” so he must lose decisively in order to make Biden’s mandate for the far-left fundamental transformation of America clear. But in fact, it is the Democrats who will have to cheat to win this November – hence their desperate push for voting-by-mail – and King’s downbeat fundraising plea is indicative of the reason why.

Carole King, as anyone alive in the latter half of the 20th century knows, was an enormously successful songwriter and recording artist back in that quaint era when the pop music industry was teeming with talented people who could write memorable melodies and meaningful lyrics, and actually play instruments and sing. You may recall that she scored a monster hit album with 1971’s Tapestry, which included Grammy-winning singles such as “You’ve Got a Friend” and “It’s Too Late.”

As the industry increasingly embraced the degraded and degrading genre of gangster rap and promoted female performers who are essentially glamorized strippers, King’s star waned, and she gradually shifted, as stars tend to do, into left-wing political activism – primarily environmentalism, in her case. Along the way, she lent her celebrity support to Democrat presidential hopefuls such as John Kerry (who seems to have a thing for Old School singer-songwriters; remember the awkward moment when he introduced soporific crooner James Taylor to sing King’s “You’ve Got a Friend” in Paris to help the French heal from the Charlie Hebdo massacre?). She even made a short speech and performed at the Democratic National Convention in 2004.

In the election years after that, King was the wrong color and generation to provide any cultural cachet for candidate Barack Obama, who instead recruited former drug dealer Jay-Z Carter and his ghetto-fabulous wife Beyoncé to lure young voters. But King is more Biden’s speed, so now she is back with the aforementioned heartfelt but uninspiring fundraising request, which she begins by writing, “I’m just going to say it: The Republican National Convention is nauseating,” replete as it is with “Republican sycophants parroting Trump talking points.”

By “Trump talking points” she means his upbeat message extolling American exceptionalism and heroism, law and order, and hope and opportunity for all. Those are the kind of talking points the left finds nauseating. The Democratic National Convention, on the other hand, was, as Donald Trump himself put it, “the darkest, angriest and gloomiest convention in American history. They spent four straight days attacking America as racist and a horrible country that must be redeemed.” Not exactly a stirring strategy.

In a similarly morose vein, King’s fundraising message isn’t designed to rouse fervor but simply to stoke anger. Rather than offer a compelling vision of America under a Biden administration, it simply fed the left’s already severe Trump Derangement Syndrome: “Donald Trump is the most narcissistic, corrupt, malicious, unpatriotic, willfully incompetent, and unworthy person to occupy the Oval Office in my lifetime,” King grumbled, “and our nation is suffering because of his unwillingness to put country before self.” By contrast, she gushed, “Joe Biden is kind, good, and empathetic. Joe is decent, honorable, strong, and capable. And he doesn’t have to shout it from the rooftops. He just is.”

It’s hard to know where to begin deconstructing that patently false characterization of lifelong politician Biden. But let us just focus on King’s claim that he is “empathetic.” Throughout Trump’s tenure in office, the left has promoted the false narrative that he is heartless (he rips immigrant children from their parents’ arms and throws them into cages!) and lacks “empathy” (he mocks the disabled!). For Democrats, who value feelings more than reason and facts, Trump’s purported lack of empathy is a cardinal sin. So in essence, King’s message to donors is not a promise that Joe Biden has a vision to make America great again, but simply Biden good, Orange Man bad. The contrast between the two presidential rivals, she correctly asserts, “is stark.” Yes, as stark as a choice could possibly be. But “Biden Good, Orange Man Bad” is not a winning slogan. It’s the slogan of a party that is incapable of inspiring just as it is incapable of creating prosperity, only of redistributing it.

“It may not be easy for you to give right now, but every dollar will help deliver a crucial victory for Joe Biden on behalf of you, your family, your friends, your neighbors, and for the country we love,” King urged. Translation: you may be broke right now, because incompetent Democrat leaders on the state and local levels have crippled the economy in their attempt to pin the coronavirus pandemic on President Trump, and tens of millions of you lost your job and/or your small business, but Uncle Joe needs you to dig down deep anyway and support policies that will only impoverish you and America further. And for what compelling reason? Biden good, Orange Man bad.

“Donald Trump has a history of lying and cheating his way to victory,” King continued, presumably referring to his only election win: his electoral trouncing of power-mad, Saul Alinsky protégé Hillary Clinton in 2016. That victory was perfectly legitimate but the left, and Hillary herself, have never conceded it as such. When a Democrat loses, it can only be because the Republicans suppressed black voters by unreasonably requiring some form of ID at the polls. “But if enough concerned online supporters like you step up and chip in,” King adds, “Joe Biden and Kamala Harris will be inaugurated on January 20, 2021. How cool is that???”

Not very. Biden is already clearly so cognitively-challenged that he may not be capable of functioning as President even from Day One, leaving Harris, the second-most leftist member of the Senate (behind radical harpy Elizabeth Warren), in charge. She is a ruthlessly ambitious political bully who will push hard for slavery reparations, gun confiscation, a Green New Deal, and other catastrophically stupid policies. Fortunately she won’t get the opportunity, because she and Biden and Carole King are pushing a losing message.

“Don’t lose hope,” King consoles her depressed Democrat readers. “It won’t always be this hard. The wheel of history will turn in a better direction.” Yes it will, and Donald Trump’s hand will be on that wheel as his re-election in November steers America away from the dystopian Marxist direction in which Biden and Harris want to take us.