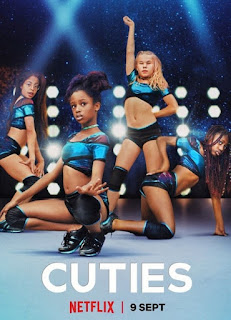 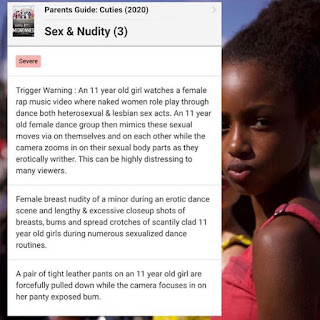 But as Breitbart News’ John Nolte wrote in his review, “Cuties is not an indictment of the sexualization of children. Cuties sexualizes children,” and portrays the young girls’ twerking ultimately as a “path to enlightenment and growth.”

Predictably, the left-leaning mainstream film critics have leapt to the movie’s defense, calling it “extraordinary” and “inspired” and dismissing its detractors as uptight “scandal-mongers on the right.” “It’s actually a sensitive portrait of growing pains that deserves to be seen,” Rolling Stone reassured its few remaining readers.

The New Yorker’s Richard Brody dismissed the “scurrilous campaign” from conservatives he claims simply don’t understand the movie. “The subject of Cuties isn’t twerking,” he insists. “It’s children, especially poor and nonwhite children, who are deprived of the resources — the education, the emotional support, the open family discussion — to put sexualized media and pop culture into perspective.”

RogerEbert.com critic Monica Castillo also argued that the movie “actively critiques the very thing pearl-clutchers were mad about — the sexualization of children.” Mashable critic Angie Han chimed in similarly: “It’s upsetting, and it’s supposed to be — because the whole point of Cuties is how damn hard it can be for girls to navigate womanhood in a society that’s all too eager to tell girls and women what they should be, and not at all interested in what they might be or want to be.”

This argument is delusional; it is actually feminism, not “society,” that is all too eager to tell girls and women what they should be and is not at all interested in what they might be or want to be. Cuties reflects a sexualized pop culture that feminism has intentionally created, to “liberate” our daughters from the patriarchal chains of the nuclear family.

Tim Robey at the UK Telegraph praised the film as “a provocative powder-keg for an age terrified of child sexuality” (emphasis added) – a description that says much more about Tim Robey than it does about the purported prudes he is sneering at. He tittered approvingly that it has “pissed off all the right people” – by which he means people who vehemently oppose the sexual exploitation of children under the pretense of art.

But Los Angeles Times critic Justin Chang praised the movie as not at all “exploitative,” condemning its detractors as “putative grownups” who “can never be bothered to do the hard work of looking at something, let alone learning from it.”

Well, I did the hard work. I watched Cuties, and I learned from it – or at least, it confirmed what I already knew, which is that the entertainment critics at mainstream media outlets will defend any perversity, any ugliness, any slog through the gutter, rather than seem judgmental or moralistic. None of them is willing to align themselves with the “scurrilous,” Philistine “pearl-clutchers” of the right who just don’t understand art. None of them is willing to admit that they are the apologists of an inherently exploitative showbiz industry that is populated with pedophiles at the highest cultural and political levels.

Breitbart’s Nolte points out that “a full 88 percent of critics approve of Cuties, Netflix’s piece of soft-core child pornography, while only three percent of the audience agree.” This speaks volumes about the vast chasm that lies between the worldview of our leftist cultural elites and that of everyday Americans, who are becoming increasingly repulsed by the sinful excesses of pop culture.

The critics are tragically correct about one thing: our culture hyper-sexualizes women and children and shows no sign of reining that in. We are submerged in a cultural cesspool of such bottomless degeneracy that the number one song in the country is a steaming pile of rap pornography called “WAP” (as in, “wet-ass pussy”), marketed by a music video that glamorizes self-proclaimed “whores” (that is the female rappers’ own word, not mine). Shame on us. And yet the Democrat Party is so enamored of former stripper Cardi B, the Grammy-winning “recording artist” behind that hit song, that empty-suit presidential nominee Joe Biden saw fit to be interviewed by her for Elle magazine (because even fashion magazines now are leftist propaganda outlets.)

So yes, Cuties’ purported message that today’s little girls don’t know how to navigate our sexualized culture is a very real issue. And who made our culture what it is today? Who dragged our values down to the point at which a movie like Cuties is nearly unanimously defended by our media elites? Answer: the secular libertines of the Marxist left, whose relentless aim has been, and still is, to undermine the values of Western civilization, to push the envelope of “art” until no envelope even exists anymore, until there are literally no moral boundaries, no limits, no line in the sand.

If a movie that sexualizes children can be defended by claiming it is a critique of the sexualization of children, then what cannot be defended? It’s hard to imagine how our culture could degenerate even lower, but it can and it will unless enough Americans with a moral compass find the backbone to say no more, to put an end to the left’s domination of our media and entertainment.