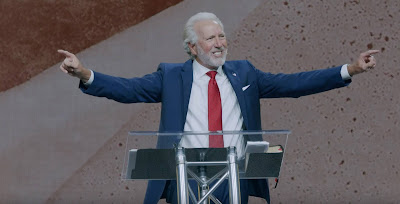 Pastor Greg Fairrington, the leader of the 3,500-member Destiny Christian Church outside Sacramento, is defying this threat to religious liberty by continuing to hold in-person services. “If we don’t take a stand, all we’re doing is kicking the can down the road and we will be having the same conversations in three weeks, six weeks, six months, or even a year from now," Fairrington told Fox News. “We need to collectively take a stand and say, ‘We are the church, and we have a biblical and First Amendment right to worship together.’”

“Our mandate is to obey the Word of God, and worship is a part of what we do as a church corporately," Fairrington wrote in a statement. “As we pull together as a community, we choose to live in faith over fear. Just like our currency states, our founders pledged, and our churches believe: In God We Trust.”

Fairrington also urged other pastors to defy the lockdown as well. “It is time for pastors to open up their doors and let people come to church again,” he had told his congregation just prior to the latest lockdown. “With all due respect, if you think our governor is going to relent — if you think he’s going to be nice to church someday, you are fooling yourself. This is just the beginning of where he wants to take the church.”

The pastor graciously took time to answer some questions for FrontPage Mag.

Mark Tapson:           Pastor Fairrington, you find yourself at the center of a political controversy, but prior to this, would you have said your preaching ever turns political? In other words, politics and “social justice” concerns are a big part of some churches’ focus – would you say that’s the case with Destiny Church?

Greg Fairrington:   At Destiny, our focus is pursuing the presence of God. We do not pursue controversy or confrontation for the sake of it. We pursue Jesus, and wherever that takes us, we do not shy away from it.

MT:     How did the first coronavirus lockdown affect Destiny Church and your work there?

GF:      When the Governor decided to put California on lockdown, we fully complied. We moved to a completely online format, and saw great success. We were seeing an audience of 35,000+ people every Sunday engage with us. We partnered with dozens of organizations in our community to provide response resources like food, clothing, and toiletries to hundreds of families struggling because of the COVID restrictions and the economics and emotional impact that was taking on our community. We were told it would be a two-week lockdown, and after two months, we knew we had to do something. A group of 1,000+ Churches made the decision on May 31st, Pentecost Sunday, to re-open under the realization that it's our First Amendment right to gather and worship.

MT:     Ordinarily, Christians acknowledge that, as Jesus instructed, we should render unto Caesar that which is Caesar’s, and unto God that which is God’s. At what point did you begin to feel that Caesar was beginning to constrain you and your congregation from rendering unto God what is His? And what made you realize the time had come to defy Caesar?

GF:      When Gov. Newsom began picking winners and losers of who could stay open and who had to close, we realized this was a clear overreach of authority. Businesses are suffering, families are losing their jobs. Costco could stay open with no restrictions, but people who were in need could not gather and worship? It was then that we realized it was time to defy "Caesar."

MT:     Some church leaders are declaring that Christians have a responsibility to submit to the authority of government, and that their churches will abide by the government restrictions as long as they’re in place. And many churchgoers are saying they want to lay low and stay safe until the pandemic is under control. What would you say to those leaders and churchgoers?

GF:      We honor and respect authority, but we also believe that in moments when the Church is being targeted, we have to obey God rather than men. Acts 5 is a great example. The Apostles were brought before the high priest because they were told not to gather and preach, but Peter responded, "We must obey God rather than men!" The Church has a responsibility and obligation to worship and gather. I would encourage all leaders to visit our Church and see that gathering can be done in a healthy, safe way. We've launched a campaign called #OpenTheDoors – and we are encouraging churches across the state to open up.

MT:     Apart from the pandemic, our country – its history, its foundations, and its values -is under assault from so much escalating chaos and anarchic violence, it’s hard not to see this conflict as more than just political. Do you believe America is engaged in a spiritual battle, too? And if so, how do we win?

GF:      I fully believe we are in a Spiritual battle in our nation. Its history and values are under assault. This is the moment for the Church to rise up and use her voice. I believe a Great Awakening is coming to the United States that will start in California. Christians have to pray and prepare for what God is doing in this moment. President Truman boldly declared that “This Nation was established by men who believed in God. You will see the evidence of this deep religious faith on every hand.” Our Nation has to return to God, and when it does, we will see the greatest move of the Holy Spirit our nation has ever witnessed.