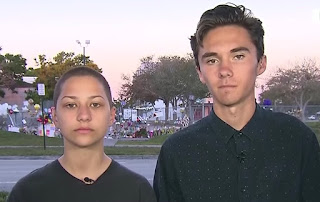 In this recent video clip from a news channel’s interview with 16-year-old climate activist Greta Thunberg, it is clear that the young girl has no special insight to offer, only canned platitudes (“If everyone does something, huge changes can happen”). And yet the older male interviewer fawns over his teenage subject as if she is a credible, informed expert and a wise Cassandra whose dire warning we ignore at our peril. He does so not in spite of her youth, but precisely because of it. Why? Because the leftist media, and the left generally, love propping up gullible, politically indoctrinated children as authoritative mouthpieces to promote their agendas.
Swedish schoolgirl Thunberg attracted worldwide media attention at age 15 for her activism against weather, and is now the deadly serious face of the left’s climate change hysteria. Recently nominated for a Nobel Peace Prize, Thunberg is following in the carbon footprints of environmental activist Xiuhtezcatl Roske-Martinez who, at the age of 15, entreated the United Nations General Assembly in 2015 to take action against purportedly human-caused climate change.
After the Parkland school shooting in Florida on Valentine’s Day, 2018, student activists David Hogg and Emma Gonzalez (pictured above), 17 and 18 respectively at the time, were ubiquitous in the media coverage about the atrocity – not because their thoughts on the incident were any more insightful than those of any of their fellow students, but because of their forceful calls for stricter gun control and their eagerness to demonize the hated National Rifle Association. Parkland students who didn’t take a strong anti-gun stance quickly found themselves ignored by the news media. Hogg, whose bumper-sticker mentality proved to be no barrier to getting into Harvard, shot to prominence overnight as the face of the gun confiscation movement in America.
Jazz Jennings, born male in 2000, was only six years old when he began making television appearances – including an interview with Barbara Walters – to discuss his gender dysphoria. He went on to become the media darling of transgender activism, with his own reality TV show about transgender teen drama and his gender reassignment surgery. Similarly disturbing, child drag performer Desmond is Amazing has been the young, garishly made-up face of LGBTQ activism for years, celebrated as a trailblazer on national talk shows and in gay pride parades. He is only eleven.
These are just a few recent examples of the leftist habit of ushering children to the forefront of their various agendas. Those on the right rarely if ever do this. This is not to say that young conservative activists don’t exist; 16-year-old CJ Pearson, for example, was politically active in grade school and was still only twelve years old when he began attracting national media attention as young, black, and conservative. But Pearson is not a leading rightwing personality, much less the face of any particular right-leaning policy, and every other young conservative activist I can think of is at least college-aged.

The exploitation of child activists is a purely leftist strategy. Why? The simple answer is that the left is for children of all ages and the right is for adults of all ages. From Greta Thunberg, 16, to George Soros, 88, leftism attracts people who cling to their youthful, utopian delusions of societal perfection; conservatism attracts people, both young and old, who are grounded in the reality of human nature and of life experience. Leftism stems from passionate – if not obsessive – idealism (regardless of the fact that their ideals wreak widespread destruction) and a lust for the power necessary to enforce those ideals. Conservatism stems from an acknowledgement of our fallen and imperfect nature, and a wariness of power, both of which come with maturity.
One might think that putting children on the political front lines is an easily-countered strategy, but in fact it is shrewd and effective for the obvious reason that a very young spokesperson – the younger the better, within reason – is emotionally manipulative, and the left is nothing if not emotionally manipulative. Using a child to push an agenda cuts cleanly through the right’s logic and facts like Alexander the Great’s sword through the Gordian knot. Actually, a better analogy might be that it allows the left to completely circumvent logic and facts, which are the left’s Kryptonite. Rational argument from an adult can be disarmed by the presumed beautiful innocence of children, especially articulate children with a sense of self-importance inflated by their adult handlers. Any grownup who dares challenge their emotion-based sloganeering can be easily dismissed as a heartless bully. When little totalitarians like David Hogg or Greta Thunberg condemn you for bequeathing to them a bleak future, only a jaded, selfish meanie would scorn their earnest desire for a better world. After all, the future belongs to them; we adults had our shot and we screwed things up, they tell us, so it’s time for smug young know-it-alls to clean up our mess.
How can the right counter this frustrating, exploitative strategy? The best defense is a scorched-earth offense. Don’t play their game, ever. Ignore the left’s appeals to emotion and irrationality. Barrage them relentlessly with facts and reason and evidence and, most of all, with ridicule, because nothing can survive ridicule – least of all humorless leftists, who are unaccustomed to being on the receiving end of it. Be the adults in the room – adults who aren’t afraid to discipline their children when required.
The Romantic poet William Wordsworth once waxed sentimental about the clear-eyed wisdom of a child: “Thou, whose exterior semblance doth belie Thy soul's immensity; Thou best philosopher,” he gushed. But contrary to what Wordsworth and today’s Democrats would like to believe, wisdom comes not from fresh-faced innocence but from deep humility, lifelong learning, and broad experience. A civilization shaped by a sentimentalist, childlike worldview is doomed to self-destruct.
From Frontpage Mag, 5/16/19)
at 9:42:00 PM