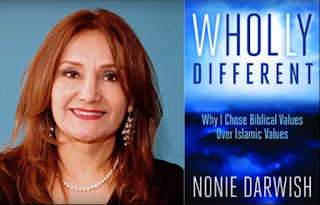 Several years ago I was expressing to a friend of mine what I assumed was the undeniable fact that the world has an Islam problem. Her kneejerk response, ingrained by years of Progressive indoctrination, was, “But don’t you think Christianity is just as bad?”
Tragically, this continues to be the instinct among the multiculturalist multitudes in the West: a reflexive defense of Islam and an equally swift condemnation of Christianity. As jihad in all its forms – violent, cultural, legal – advances in the West, willfully blind defenders of Islam keep insisting that it is one of the world’s great Abrahamic religions, that all religions have extremists, and that, if anything, the colonialism and intolerance of the Christian West is the bigger problem. Our cultural elites demonize and fear-monger about the Christian right in ways they would never dream of characterizing Muslims.
Meanwhile Islam’s presence multiplies across the West as Christianity’s diminishes. To cite just one example: Giulio Meotti at the Gatestone Institute reports that since 2001, London alone has lost 500 churches of all denominations, with 423 new mosques springing up to replace them. As we face the momentum of an Islamized West in the future, the question “Isn’t Christianity just as bad?” has become one of paramount, existential importance.

Nonie Darwish, a former Muslim and now Christian convert, demolishes that moral equivalence in her new book Wholly Different: Why I Chose Biblical Values Over Islamic Values. She has proven in the past with her books Now They Call Me Infidel, Cruel and Usual Punishment, and The Devil We Don’t Know that she is a fearless crusader for truth against the apologists of Islam and the enemies of Christianity, and this book is her most forceful testament yet.
Ms. Darwish begins Wholly Different by noting that it wasn’t until she emigrated from Egypt to America that she began to get a clear perspective on the Islamic values she had accepted unquestioningly for the first thirty years of her life – values that she came to see “are diametrically opposed to Biblical moral values.” Her life under Islam “was a constant struggle to survive and placate a system that was unforgiving and unaccepting of anything less than total surrender of my humanity, dignity, and privacy – in other words, my life, liberty, and pursuit of happiness.”
But her introduction to Christianity was transformative. “When I became Christian and heard for the first time that we human beings were made in the image of God, I wept. I was in awe at the honor, after being given shame and little value under Islam,” which is “not about transforming hearts and renewing minds; it is about conquering lands and enslaving minds.”
“While the overriding theme of the Bible is the redemption and happiness of believers,” she adds, “the overriding theme of Islam’s holy book is punishing non-believers.”
Her new life where those principles life, liberty, and pursuit of happiness were at the center of the American Way showed her that “the differences between moral and immoral, good and bad, honor and dishonor, and success and failure were totally different” here. “In the West I found my peace and humanity… because of Biblical values that are the foundation of Western society”:
Not too many people notice that Biblical values are everywhere in America, even among those who call themselves secular, non-religious, or atheist. But I see Biblical values everywhere here. There is no other explanation for how different life in America is from life in the Islamic world.
[…]
It is unfortunate that many Americans take Biblical values for granted, assuming that kindness, honesty, and joy are the norm, with or without the Bible. Those of us who grew up in the parts of the world beyond the influence of the Bible know better. Biblical values are the product of the Bible, and they cannot be preserved separate from the Bible.
Darwish goes on to enumerate a list of differences between Biblical and Islamic values that she has personally witnessed. She breaks down these and literally dozens of other dichotomies throughout the book:
·         We Are All Sinners vs. They Are All Sinners
·         Life is Sacred vs. Death is Worship
·         Guided by the Holy Spirit vs. Manipulated by Human Terror
·         God the Redeemer vs. Allah the Humiliator
·         Jesus Died for Us vs. We Must Die for Allah
·         The Truth Will Set You Free vs. Lying is an Obligation
·         Faith vs. Submission
Darwish proceeds to hold up the two sets of religious values as mirror-opposites of each other, with virtually no common ground. She makes no attempt to whitewash Islam, which she refers to as “a cult of death,” and she pulls no punches in presenting it as Christianity’s mortal enemy. “Everything God tells us in the Bible that He loves, Islam has set out to destroy. Islamic values are backward, the opposite to what every Jew and Christian holds dear… The Koran represents a negative power, a dark and subversive force that relentlessly challenges the authority of the Bible and God Himself.”
“The flame of the Islamic rebellion against the Bible has been burning for fourteen hundred years,” Darwish continues. “It is fueled by terrorism, but also by intentional misinformation, propaganda, and lies.”
From praising versus cursing, from creating wealth versus seizing it, from seeking humility versus seeking power, from the example of Jesus to the example of Muhammad, to the differing takes of Christianity and Islam on the seven sins and the Ten Commandments, on reality and mental health, and on family values and feminism, Darwish draws a detailed picture of an incompatible pair of value systems embroiled in a worldwide culture clash. And one of them falls short in every respect: “Islam has failed to provide its followers with a comprehensive and well-integrated value system or with examples of true holiness and godliness. The behavior and character of Muhammad certainly do not qualify.”
“Islam lacks confidence in itself,” Darwish asserts, and thus “the mere existence of a freely chosen competing faith threatens Islam at its very core… Thus the Bible has become the number one threat to Islam’s ability to prevail.” That is why a book like Wholly Different is such a vital reminder in our time of the vast gulf between the two religions’ sets of values. As Islam wages genocide against Christians in the Middle East and pursues cultural jihad throughout the West, Christianity wrestles internally with a paralyzing identity crisis. There is no more time for self-doubt, no more time for “Coexist” bumper stickers and wishful thinking, no more time for appeasement. What our choice comes down to, Ms. Darwish’s book reminds us, is this: “The values of the Bible lead to peace, prosperity, life, liberty, and happiness. Islamic values will take any society to Hell.” Time to make our choice.
From FrontPage Mag, 4/5/17
at 8:45:00 PM