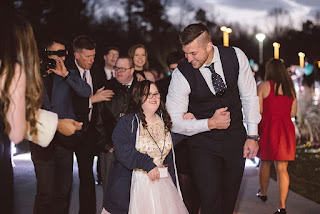 Last weekend the Tim Tebow Foundation put on its annual Night to Shine prom experience for a whopping 75,000 people at 350 churches in 50 states and 11 countries. The event is for people ages 14 and older with special needs. “The Night to Shine movement is more than just a prom,” said Tebow. “It is a night where people with special needs shine and they are told that they matter, that they are important and that God has a plan for their life!”
In a promotional video, the former Heisman Trophy winner and NFL quarterback (and now a Mets outfielder) Tebow is shown flying to Haiti to kick off this year’s celebration and dance with some of the special needs kids before jetting off to other Night to Shine locations. “I love these kids and celebrate them,” Tebow says of the Haitian children, and you believe him.
Love him or hate him – and wearing his Christianity on his sleeve has earned him many from both camps – it’s difficult to doubt Tebow’s sincerity or joyful commitment to charitable works. In fact, Tebow is better known for his unusually forthright Christianity than his on-the-field achievements. And he almost certainly would prefer it that way. One gets the impression that he is unimpressed by his own celebrity status but uses it to serve others.
Speaking of status, very few former athletes have achieved the degree of celebrity of David Beckham. One of soccer’s all-time greats (though many would consider him a better ambassador for the sport than a player), Becks nonetheless is far more widely-known as an influential style icon and Spice Girl husband with a net worth of upwards of $350 million.
Like the younger Tebow, Beckham too has established a reputation as a philanthropist. He has been a UNICEF ambassador for over a decade, and was a co-founder of the Malaria No More leadership council. And like Tebow, no one ever questioned Beck’s sincerity or commitment to those causes, either – until last week.

Beckham found himself the center of a humiliating scandal when leaked emails from 2013 allegedly showed how desperate the superstar was to be awarded a knighthood by the Queen of England. They also suggested that he could fly into a petty rage when denied that honor.
The emails strongly suggest that Beckham and friend and PR adviser Simon Oliveira strategized to ensure that the former’s charity work would get him dubbed “Sir David.” As one source put it, “Humanitarian causes were just a stepping stone for his personal affairs, and to project his image among advertisers.”
For example, Oliveira advised his client to publicly oppose the Scottish independence movement because “your support will play well with establishment and in turn help your knighthood.” Beckham reportedly replied: “Ok let’s do it.”
As the time to announce the year’s recipients neared, a British newspaper published a front-page story with the headline “Arise Sir David,” suggesting Becks was a shoo-in. Ahead of a TV appearance by Beckham, Oliveira emailed the program’s producers to suggest that “Maybe [host] Jonathan [Ross] should ask about the knighthood and say he should get it. What do you think? David is up for it.” Apparently they agreed – Ross did indeed bring it up on the show, and Beckham played along.
When he learned a few weeks afterward that his bid had failed, he allegedly ranted at members of the Honours Committee in an email, calling them a “bunch of c****” and adding, “Who decides the honours? It’s a disgrace.”
Beckham then reportedly turned his jealous petulance on mezzo-soprano Katherine Jenkins, who was awarded an Order of the British Empire the same year Beckham failed to get a knighthood. The OBE is bestowed by the Queen of England for public service and contributions to the arts and sciences. Beckham himself was given one in 2003. In an email to Oliviera, Beckham allegedly scorned Jenkins’ qualifications: “Singing at the rugby and going to see the troops plus admitting to taking coke? F****** joke.”
There’s more, but a Beckham spokesman dismissed all the emails as “taken out of context” and “hacked and doctored.” A source “close” to Beckham, however, said that his rant about the judges was real and understandable:
“David is just like any normal person and he was extremely disappointed that he wasn’t deemed worthy of becoming a Sir… He spent a lot of time and effort getting the London Olympics to the UK which had such a positive effect on so many people, but for it not to be acknowledged made him very emotional. Who wouldn’t be?”
A more humble man, that’s who. It’s almost impossible to picture Tim Tebow making such a petty outburst for being passed over for even a prestigious award. “I think the greatest [character quality] to possess is try to be humble,” Tebow has said. “How can we do that? I believe it’s by being a servant.” While no one wants to be undervalued or unacknowledged, cynically working a charity as part of a strategy to earn the honorific “Sir” demonstrates a repellant lack of humility. It’s unseemly at best, dishonorable at worst.
To be clear, there is no question that both former footballers have done admirable charity work, and that’s what matters. The issue, and the difference, is the disgraceful revelation that Beckham’s motivation seems to stem from a self-aggrandizing ambition, a barely-contained lust for recognition. That’s not a crime; this is hardly immoral on the scale of, say, the Clinton Foundation, which took advantage of the Haitian people after a devastating earthquake there by funneling countless millions of dollars in relief funds to friends, donors, and reconstruction projects that never materialized.
But the emails, assuming they have not been doctored as claimed, nevertheless reflect ignobly on Beckham. Sadly, we inhabit a trash-talking, selfie-taking, self-promotional age that doesn’t value honor or humility much anymore, so perhaps Beckham will emerge from this scandal unscathed in the long run. It would be a shame if, along the way, the pop icon isn’t compelled to reevaluate himself, take a page from Tim Tebow’s playbook, and learn a little humility in service.
From Acculturated, 2/15/17
at 11:40:00 AM