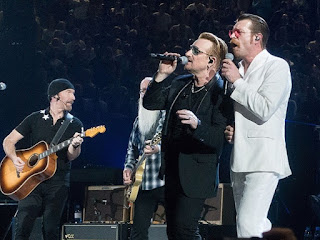 One month ago, Eagles of Death Metal were in mid-performance at the Bataclan Theater in Paris when their show was interrupted by a terrorist attack that left 89 dead there (and 130 total in coordinated attacks elsewhere in the region). All the members of the rock band survived and were understandably traumatized, but they swiftly determined to return to Paris to perform as an act of defiance against the jihadists who targeted cultural expression as well as a hall full of innocent concertgoers. The band instinctively understood the power of rock music as a force for rebellion and liberation.
With its power to inspire hope and a yearning for personal freedom, rock’s barely restrained energy has always been a raucous threat to repressive governments and cultural totalitarians around the world. Islamists in Pakistan and Afghanistan have been known to blow up CD shops to silence the music. Che Guevara and the Castro regime in Cuba despised rock and persecuted musicians. A documentary called Rockin’ the Wall, narrated by my friend the actor Adam Baldwin, charts the role of rock in bringing down the Berlin Wall.
As recently as 2010, Iran’s Ayatollah Khameinei declared that music is incompatible with Islamic values, particularly music from what the fundamentalists deem to be a decadent Western culture. Khameinei banned Western music in his country, forcing many musicians into exile or underground. A thriving heavy metal scene, for example, now serves as a voice of resistance against the theocratic regime.
Western musicians and audiences aren’t accustomed to this kind of oppression. Living in the land of freedom and prosperity as we do, it’s easy for us to take that for granted until something like the Bataclan atrocity opens our eyes – and prompts us to rally in defense of freedom. “So much that was taken from Paris on the tragic night of November 13th is irreplaceable,” U2’s Bono said about the attack. “For one night, the killers took lives, took music, took peace of mind – but they couldn't steal the spirit of that city.” In an open letter to his friends, Eagles of Death Metal drummer Josh Homme wrote, “We dare not give another second of precious time to those who have tried to steal our freedoms and take away our power.”
Other musicians responded with a similar determination not to be cowed. Singer Josh Groban told the hosts of The View that he and his crew agreed music would help restore some healing normalcy, so they decided not to cancel his performance in Paris shortly after the attacks. “Music heals. It brings people together and we're real proud of that,” said Groban. “With music, with art, we’re in a privileged position that we have a chance to bring people together for all the right reasons.”
Boston-based musician Will Dailey and his band were on tour through the northwest of France when the attacks happened. Their next show was cancelled for safety concerns, so Daily and crew set up shop in a community center to play before a small audience and stream the show online. “They attacked music,” Dailey says of the jihadists. “Music is unity, universal communication, therapy, safe expression. [Our show] was a counter-attack in a way. It is freedom. Folk music, Rock and Roll, hip hop – they have always been about freedom.”
Less than a month after the attacks, U2 invited Eagles of Death Metal back onstage in Paris for the Irish band’s final show of their Innocence + Experience 2015 world tour. “They were robbed of their stage three weeks ago, so we'd like to offer them ours tonight,” Bono told the crowd. The bands played a cover of Patti Smith's “People Have the Power” together before U2 left the stage so Eagles of Death Metal could play their own “I Love You All the Time.”
In a Facebook post about their emotional return to Paris, Eagles of Death Metal addressed “the healing, defiant power of rock ‘n roll”: “The bad guys never take a day off, and therefore we rock ‘n rollers cannot either... and we never will.” The note concluded by thanking U2, the people of France, and “everyone in the world who continues to prove that love, joy, and music will always overcome terror and evil.”
It may take more military firepower than love, joy, and music to overcome terrorists like ISIS, but our freedom of expression and rock’s subversive power are indispensable defenses against totalitarian aggression. As Paul McCartney put it in his song “Freedom,” written in response to the terror attacks on September 11, 2001:
This is my right, a right given by God
To live a free life, to live in freedom
Anyone who wants to take it away
Will have to answer, ‘cause this is my right.