Best of Enemies: the Buckley-Vidal Debates 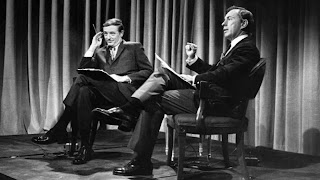 In the summer of 1968, ABC ranked so far behind NBC and CBS in the ratings that it was joked that the network came in fourth out of the three. It needed a gimmick to boost it out of the cellar. As the Democratic and Republican national conventions got underway, ABC hired two rapier-witted public intellectuals – William F. Buckley, Jr. and Gore Vidal – to debate each other on live television. Their explosive sparring propelled ABC News past the competition and transformed public discourse in the process.

Magnolia Pictures has captured this historic showdown in a very entertaining 89-minute documentary called Best of Enemies, which is now available for digital download and will be released on Blu-ray and DVD November 3rd. Featuring some fascinating footage of Buckley and Vidal and interviews with Andrew Sullivan, Christopher Hitchens, Dick Cavett, James Wolcott, and others, the movie is highly recommended.

Buckley, of course, was the preeminent conservative commentator, founder of National Review, host of Firing Line, and author of over fifty books including God and Man at Yale. The openly gay leftist polemicist Vidal was a celebrated novelist (Myra Breckenridge, Burr, Lincoln), playwright, essayist, and harsh critic of American foreign policy. Each of the two pugilistic pundits with their patrician accents and acid tongues saw the other as a threat to American values, and their seething enmity toward each other eventually boiled over shockingly in the course of the ABC debates.

“Buckley was the first modern conservative intellectual to see that ideological debates were cultural debates,” says his biographer Sam Tanenhaus. Vidal too acknowledged that “a cultural war has now joined the race war in the United States… This was the beginning of a war between an old order and what I hoped would be a new order.” In a way, the two men manifested the opposing cultural forces in 1960s American society, and the ABC debates shaped up as a way to determine in microcosm which way the country would turn.

Buckley came prepared to have fun debating the issues, but Vidal came prepared to demonize Buckley in the time-honored manner of leftists even today: as a heartless, greedy, racist, elitist bigot who despised the poor. Buckley was very familiar with this sort of attack, but Vidal knew how to get under his skin, and in the ABC debates he was relentless in creating for viewers a caricature of Buckley as a figure of moneyed white privilege (though Vidal certainly had no less privileged an upbringing himself). He lectured Buckley on the country’s income inequality, to which Buckley replied forcefully that “freedom breeds inequality.” Vidal, as if prescient about the Occupy Wall Street movement, warned his opponent that “you’re going to have a revolution if you don’t give people the things they want… They’re going to come and take it away from you.”

This prospect did unsettle Buckley some, because like all Americans in 1968, he saw cultural standards and traditions breaking down. He reviled what he called a mutinous element of society, and correctly predicted that the issue that would win the 1968 election was law and order.

That point could not have been made more starkly than at the Democratic convention in Chicago, where riot police and protesters clashed infamously. During the continuation of their ABC debates there, Vidal proclaimed the death knell of American empire, as evidenced by Vietnam and this unrest at home. “It’s like living under a Soviet regime here,” he said of the police brutality outside the convention theater. Buckley countered that “despicable” individual acts of police violence did not make a case for institutionalized fascism in America.

The argument escalated quickly into personal insults. Moderator Howard K. Smith tried to intervene and plead for civility, but it was too late. Vidal called his opponent a crypto-Nazi and Buckley lost it. “Now listen, you queer,” he shot back, “stop calling me a crypto-Nazi or I’ll sock you in the Goddamned face and you’ll stay plastered.” A noticeably distressed Smith declared the segment out of time for the evening, and grumbled that “more heat had been shed than light” in the evening’s confrontation. “The network nearly shat” over it, recalled Dick Cavett.

Buckley agonized for months about losing control, asking himself if he could have handled the moment better. He wrote a lengthy self-defense for Esquire, and Vidal responded in kind, suggesting in the course of his piece that Buckley was a latent homosexual. The result was three years of litigation between the two, at the end of which Buckley simply declared victory in a press conference just before the pair actually went to court.

Vidal was wounded by it as well. A confidante comments in the film that Vidal’s obsession with his antagonist ultimately bordered on “Norma Desmond territory” (referring to the insane Sunset Boulevard character), particularly as the novelist’s career lost steam and relevance.

Best of Enemies winds down on a surprisingly poignant note: two brilliant men consumed to the very end with claiming final victory over each other. But the documentary then strays from its charismatic protagonists and tacks on a conclusion about the lamentable current state of televised political commentary. We’re not listening to each other, the movie asserts; each side of the country’s political divide is trapped in its own noisy echo chamber rather than debating and sharing ideas in a common forum like the Buckley-Vidal debates. This is true to some extent but a facile and uninteresting point, and the clip of Comedy Central’s Jon Stewart pleading for more debate and less theater is laugh-out-loud hypocritical – Stewart, the man more responsible than any other for draining intellectual balance from television news and turning it into entertainment.

In any case, both Buckley and Vidal understood, as other intellectuals of the time did not, the value of using television to advance political ideas and philosophies, not to mention their own public personae. And yet both men complained about the medium’s inherent antipathy to intellectualism. Buckley said that there is a conflict of interest between “that which is highly viewable, and that which is highly illuminating.” Vidal wondered aloud whether viewers ever really “heard” the nuances of what was said and if all they did was focus instead on image and impression.

Nonetheless, for better or worse the debates virtually created the familiar TV news model of pundits challenging each other acrimoniously on the hot topics of the day in segments such as 60 Minutes’ “Point/Counterpoint” (Saturday Night Live parodied this trend in a well-known ‘70s skit in which Dan Aykroyd addresses his political opponent Jane Curtin as “Jane, you ignorant slut.”). But hotheaded though they may be, the Geraldo Riveras and Eric Bollings of today are no match for yesterday’s best of enemies, William F. Buckley and Gore Vidal.