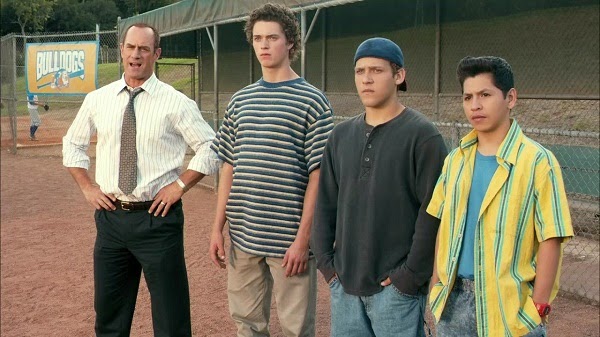 The typical family sitcom dad for decades now has been a subversion of the Father Knows Best, The Andy Griffith Show, or My Three Sons standard of the 1950s and ‘60s. Instead of a stable, mature, moral role model, he became a lovable but doughy, bumbling doofus who is barely adequate at life and parenting, who needs more patient mothering from his exasperated and usually more attractive wife than even his kids do. See The King of Queens, The Simpsons, and Everybody Loves Raymond, for example.

Set in the 1990s, Surviving Jack is aptly described as “a family comedy about a man becoming a dad, as his son is becoming a man.” Based on the book I Suck at Girls by Justin Halpern, author of the hugely successful, semi-autobiographical Sh*t My Dad Says, it stars Meloni as Old School doctor Jack Dunlevy. His wife Joanne has decided to make a late-life go at law school, leaving Jack to guide their teenage children Franky and Rachel precisely at the time when both kids are stumbling their way into adulthood.

Jack’s blunt, heavy-handed parenting style is reflected in his response to Joanne’s suggestion that they try reasoning with their children: “Kids don’t listen,” he says, “unless you rub their noses in their own feces – which unfortunately we can’t legally do.” In that respect, he’s even tougher than Modern Family’s gruff patriarch Jay and vaguely reminiscent of another dad named Jack in a similar sitcom from an earlier generation, The Wonder Years. In the process of steering his shy, awkward son toward manhood, Jack Dunlevy doesn’t bother sugar-coating life’s hard lessons.

In the second episode, for example, Franky and his two closest friends George and Mikey all want to make the high school varsity baseball team. They’ve been together since the second grade, and they envision carrying that inseparable bond forward forever. Franky tells his dad that his great friends would take a bullet for him. “People say that until it’s bullet time,” Jack counters.

Drill sergeant Jack puts them through the paces to prep them for the tryouts. Franky has pitching talent. Mikey becomes a home-run slugger when Jack urges him to tap into his anger toward his deadbeat dad. But diminutive George simply doesn’t have what it takes. Jack tells Franky to give up on the dream of all three amigos making the team: “This is survival of the fittest, not survival of the fittest and his little friend.” But Franky is determined to prove him wrong and keep the trio intact.

During the tryouts, Franky finds himself pitching to George at bat. He holds back in order not to make George look bad – which accomplishes nothing except to make them both seem like weak players. Jack pulls his son aside and advises him, “How do you think George is going to feel when he finds out you both didn’t make the team because you were going easy on him? Use your gift,” he adds. “Don’t waste it.”

Life’s not fair, in other words. Not everyone has the goods to make the team, and those that do shouldn’t squander their talent out of a misguided sense of equality that can only drag everyone down to the lowest common denominator. Franky takes the lesson to heart and hurls some impressive fastballs past his outclassed friend.

He and Mikey make the team, but Franky is “bummed that George won’t be there.” Jack tells him “Life has a way of dragging people apart. But if they’re worth it to you, you’ll make the effort to keep ‘em in your life.” The episode ends with Franky heading over to George’s to hang out and keep their friendship strong.

Jack is by no means perfect – he seems like the kind of father who loves his children but didn’t know how to relate to them until they started to become adults, and I imagine he has a terrible bedside manner as a doctor – but it’s refreshing to see a sitcom dad who is dispensing wisdom instead of being schooled, a good-looking athlete instead of a balding couch potato, and more mature than his children. He’s no Andy Griffith, but he’s a step in the right direction of the kind of sitcom dad audiences need to see more of.

And perhaps they will. The New York Times noted a few months ago that “most new network sitcoms are created and written by men, about men, and in particular, about the bond between fathers and sons.” Hopefully Jack Dunlevy is part of a long-overdue sea change in the way men and fathers are depicted on television.