Before Lorde, There Was Kate Bush 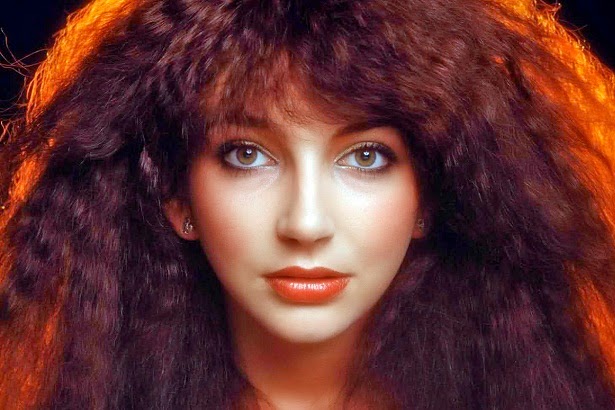 Ask anyone to name a teenage pop music sensation with a wild mane of dark hair and an offbeat artistic vision, and these days the answer you most likely will hear is “Lorde,” the 17-year-old New Zealander of “Royals” fame. But decades before Lorde, there was English singer-songwriter Kate Bush, whose rather reclusive nature and infrequent recording output eventually took her largely out of the public eye – until recently, when she announced her first series of live performances in 35 years.

The quiet, contemplative Lorde, whom Acculturated has discussed before, seems wise beyond her years and more serious about lyrically elevating pop music than are some of her well-known, corporately-packaged peers. With only one album under her belt – Pure Heroine – she’s already made her transformative mark with her whole career ahead of her.

She hasn’t publicly counted Kate Bush among her influences, which interestingly seem as literary (American short story writer Raymond Carver, for example) as they are musical (Fleetwood Mac’s Rumours). But pretty much every artsy female recording artist since Bush has been influenced by or compared to her: Tori Amos, Fiona Apple, Bjork, Sinead O’Connor, Alanis Morissette, all the way up to Florence and the Machine, Lady Gaga, and even Shakira. Kate Bush is the spiritual and artistic mother of them all and countless more.

By the time she was in her early teens in the 1970s, the musically self-trained Kate Bush had written a boatload of songs and caught the attention of Pink Floyd’s David Gilmour, who helped her fashion a professional demo to take to record company EMI. With an eye toward cultivating a long-term career, and fearing she was too young to handle either success or failure, EMI kept her under wraps for two years while she honed her songwriting and performing skills – much like Lorde’s record company Universal, which signed the promising songwriter at 13, and gave her time to develop her material and try out different producers.

Bush’s first single, “Wuthering Heights,” went to number one in England in early 1978, and the wildly and uniquely talented Bush shot to fame. She subsequently had top 10 singles in her homeland with “Man with the Child in His Eyes,” “Running Up That Hill,” and others including a moving 1986 collaboration with Peter Gabriel, “Don’t Give Up.” She had less success in the States, partly due to the lack of touring (more on that below), but largely because, as a record exec put it, her music wasn’t easily categorized for American radio.

Her fey beauty, eclectic and experimental music, ballet-and-mime-trained dance performances, video spectacles like the Grammy-nominated The Sensual World, and historical and literary lyrical content made her a uniquely fascinating and creative figure. Whereas Lorde’s music (so far) is focused on capturing the essence of teenage experience, Bush’s surreal and melodramatic songs ran a bizarre gamut of topics that often stemmed from outside herself and her personal experience. As one critic put it, “As a songwriter, she has the ability to take intriguing subject-matter – yes, Wuthering Heights, Houdini, Henry James’s The Turn of the Screw, aspects of war, anything from aborigines getting mowed down by trucks to soft-porn – and condensing it into song.”

Kate Bush’s last round of shows was 1979’s Tour of Life, a stunning fusion of music, dance and theater which finished up when she was only 20. Though she continued to release albums (10 in total, but only 2 of new material in the last 20 years), she never toured again, reportedly due to a combination of the fear of flying, her perfectionism about the live performances of her carefully crafted studio recordings, and the traumatizing accidental death of her lighting director at one of her concerts.

But now she’s back. Bush will present a concert series at London’s Hammersmith Apollo called “Before the Dawn” that will run from the end of August to the beginning of October. Tickets to all 22 dates – some of which went for upwards of $1,600 – sold out in less than 15 minutes. Kate Bush may have disappeared from the public eye, but apparently not from the public’s hearts and minds.