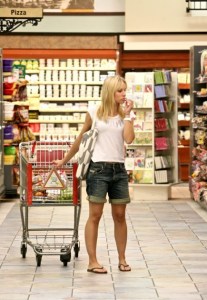 Recently Coupons.com posted the 2012 version of its annual list of top “cents-able” (I’ll pause while you groan) celebrities who still live relatively frugally despite their outsized paychecks. Not surprisingly, considering the source, the list of ten “frugalebrities” is weighted heavily toward avid coupon-clippers like actress Kristen Bell, American Idol winner Carrie Underwood, NBA star Carmelo Anthony, and Lady Gaga, of all people. But some of the other stars reveal how frugality has been deeply ingrained in their sensibilities by hard life experience.

Jay Leno, for example, despite owning a mind-boggling car collection, credits his smart money-management to his parents, who learned the value of a dollar the hard way during the Great Depression. Desperate Housewives star Eva Longoria similarly says that her father taught her not to take fortune for granted. Longtime Law and Order actress Mariska Hargitay confesses that

I constantly worry about money. I make a lot now but I don’t feel that way because I was poor and had no money for a lot longer than I’ve had it. As an actor, if this show ends next year, then what? As an aging woman, then what? I’m saving money to live on, for the future.

By contrast, an article at MSN Money online lists some celebs who are living large – morbidly obese large. When Diddy, or whatever he is calling himself at any given moment, once discovered that his luggage wouldn’t fit onto a private jet, he rented a second plane for it. That wouldn’t be a problem for John Travolta, whose five private planes include a customized $3.5 million Boeing 707, three Gulfstream jets and a Lear jet. Former fighter Mike Tyson burned through a reported $400,000 a month on his way to declaring bankruptcy, possibly because his accountant was too scared to tell him to stop. Supermodel Naomi Campbell, of weaponized cell phone infamy, allegedly incurred a $2.7 million bill celebrating her 36th birthday. Kanye West has a resident custodian for his 450 pairs of shoes. Fifty Cent owns a 52-room, 48,000 square-foot mansion with its own lake and waterfall, servants’ quarters and boat house. Style god and occasional soccer player David Beckham’s automobile indulgences include a $165,000 Lamborghini, an Aston Martin DB7, a Bentley Continental GT, a BMW X5, a Chrysler Grand Voyager, a Ferrari 550 Maranello, a Ford F-Series pickup, a Hummer H2, a Lincoln Navigator, a Porsche 911 (993) Turbo and a TVR Cerbera.

This is not to criticize their spending choices; the wealthy can certainly do what they want with their own money, and if I could earn it like Beckham, God only knows what wasteful stuff I would bring home in the trunk of my brand-new, metallic blue Aston Martin One-77. The point is that what stars do or don’t do with their riches can reveal very differing perspectives on life.

For some celebrities, living large is practically a job requirement; rappers, for example, are often selling a fantasy lifestyle of decadent opulence in their music, and for them to pinch pennies would actually undermine their credibility for many fans. But the number of naïve young celebs who pushed that too far and woke up one bleary-eyed afternoon to find themselves in the poorhouse is legion. That’s what living for the moment – not ­in the moment, but for the moment – can do to you.

Frugality, on the other hand, reflects a sense of humility, realism, personal responsibility, and independence. “By sowing frugality we reap liberty,” said the Spartan king Agesilaus. Mariska Hargitay has the maturity to look at the long term and recognize that life is unpredictable and fortune is fickle. Wealthy or not, that’s a quality that keeps us grounded and free.