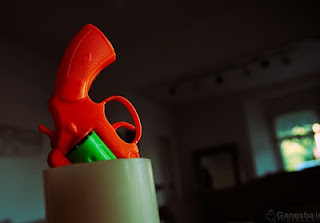 A spate of recent incidents in which schoolchildren were punished for unconscionable gun crimes triggering the hysteria of politically correct school officials highlights the left’s increasing insanity about guns.

A five-year-old girl from Pennsylvania was suspended from school last month after telling a friend she was going to shoot her with a pink toy gun that sprays hollow-point bullets bubbles. Despite not even having the bubble gun with her at the time of the shockingly dire threat, the kindergartener was later interrogated by school officials without her parents present. She was ultimately – are you sitting down for this? – labeled a “terrorist threat,” suspended for ten days, and required to undergo psychiatric evaluation.

At about the same time, a school in Maryland suspended two six-year-olds for making a gun gesture with their hands while playing cops-and-robbers during recess. Two weeks before that, another six-year-old was suspended for the same terrorist offense. This idiocy is reminiscent of an incident last year in which a deaf three-year-old was informed by school district officials that the signing he uses for his name too closely resembles him waving a gun. So now he is required to spell out his name letter by letter instead. That’ll teach him.

The insanity continues. Now a seven-year-old Colorado boy has been suspended for throwing a pretend grenade at a pretend box full of “evil forces” while playing “rescue the world” at recess. Again, that’s a pretend grenade he lobbed at a pretend box of evil (good thing he didn’t refer to it as an “axis of evil,” or the officials might have tarred and feathered the kid and run him and his Bush-loving parents out of town). His school maintains a list of “absolutes,” no-nos designed to keep the schoolgrounds safe, which includes “no fighting, real or imaginary; no weapons, real or imaginary.” Because it isn’t enough to ban students from playing with real weapons; it must be verboten even to think about them, even when combating evil.

Alex Evans said he threw the fake grenade “so nothing can get out and destroy the world… I was trying to save people and I just can’t believe I got dispended.” Alex, that’s because you’re not far enough along in school yet to have been sufficiently indoctrinated by your schoolteachers. In a few years, once you’ve absorbed enough Howard Zinn and Noam Chomsky, you will understand that we are the ones destroying the world through our imperialistic war-mongering and racist theft of natural resources. However, had you thrown an imaginary grenade at an imaginary band of violent Tea Partiers, you would have gone to the head of the class.

In an article that contains more handwringing about how guns are poisoning our children’s minds, The New York Times reports on groups of “anti-toy-gun activists” (now there’s a pathetic label) who encourage exchanges in which toys like Hula Hoops are given to children who turn in their toy guns – a sort of children’s version of firearm buybacks like the one that disarmed Australians back in the 90s. One of those is the California group Alliance for Survival, whose coordinator Jerry Rubin explains, “No one is saying that if you play with a toy gun, you’re going to grow up to be a violent killer.” No? Then why ban toy guns? Because “the game is still the same: pretend to kill your friends, pretend to kill your classmates.” Except that kids aren’t pretending to kill their friends and schoolmates; they’re pretending to kill the bad guys. Anti-toy gun activists like Rubin can’t comprehend that this might be healthy practice for when these children grow up and one day have to confront uncompromising evil in the real world.

This is all part of the radical left’s determination to make pariahs out of American gun owners, even if those guns dispense nothing more dangerous than bubbles or a deaf boy’s name. As the totalitarian hypocrite Eric Holder said at the Women’s National Democratic Club years ago, American youth need to be “brainwashed” into thinking negatively about guns. In fact, he urges kids to report gun owners to authorities, so be careful who knows you have a legally purchased and registered handgun, all you law-abiding moms and dads. You might find yourselves betrayed to the government by your own children, just like during China’s Cultural Revolution. “I’ve also asked the school board to make a part of every day some kind of anti-violence, anti-gun message,” Holder said, “every day, every school, at every level… We need to do this every day of the week and really brainwash people into thinking about guns in a vastly different way.”

This is the Attorney General who funneled guns into the hands of Mexican drug cartels, resulting in hundreds of murders. He is part of an administration that turns a blind eye to gun violence committed in this country by leftists or Islamic terrorists like the Fort Hood shooter, whose massacre was labeled “workplace violence” (as opposed to the kindergartner who was called a terrorist threat). The Obama administration cares about a tragedy like Sandy Hook only insofar as it is a crisis they don’t want to let go to waste. The administration says nothing about the ongoing handgun massacre of children in tightly gun-restricted Chicago, because it doesn’t fit their “ban guns to save the children” narrative, and because, quite frankly, they don’t care about saving the children anyway. What they care about is disarming the American populace. Their obsession with gun control is about big-government gun confiscation, not gun crime prevention, just as their demonization of guns in the minds of schoolchildren is also about disarming Americans and molding a generation of defenseless pacifists.

This hatred of guns is ragingly irrational. The left wants to indoctrinate upcoming generations into believing that, in any and all circumstances, guns – even imaginary ones; even a pointed index finger – are the apotheosis of violent evil. And yet the Obama administration has now opened the door to combat for women in the military. How are those women – and our young men  too, for that matter – supposed to deal with that disconnect, when from kindergarten onward they are relentlessly brainwashed to despise guns, and yet are now expected to go into combat and kill the enemy?

And then of course there is the hypocrisy of left-leaning Hollywood, which inundates young people with violent imagery and then pats itself on the back with smugly self-righteous public service messages calling for immediate political solutions to gun violence.

The left does not want American citizens to own guns – it’s that simple. And they want to shape our children into a helpless citizenry that entrusts its protection to the well-armed nanny state. They care nothing about the right of Americans to protect their homes, schools and loved ones from home invaders or burglars or rapists. They care least of all about our 2nd Amendment right to bear arms to oppose a tyrannical government, because that right stands in the way of the radical left’s tyrannical ambitions.