The Revolution Was Televised 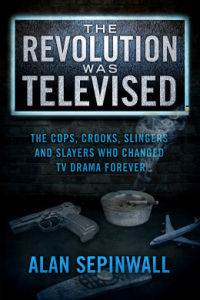 The second of a four-part series

“The revolution will not be televised,” rapped Gil Scott-Heron in 1970, quoting a 60’s protest slogan. As far as television critic Alan Sepinwall is concerned, however, a revolution in television itself already has been. His new book, The Revolution was Televised: The Cops, Crooks, Slingers and Slayers Who Changed TV Drama Forever, chronicles what he calls a “big bang of sorts,” a creative upheaval that produced dynamic shifts in the ways people watch TV and in the entertainment business itself.

Once upon a time television was limited to a handful of channels with safe programming all aimed at the broadest audience possible (the phrase “don’t touch that dial” is a holdover from a time when TVs had no remote controls and so few channels that they could actually fit on a dial, which surely must seem comically primitive to young audiences today).

Then came the cable explosion and the splintering of that audience into segments that began seeking out fare more specific to their tastes. Sepinwall points out that instead of diminishing the business, however, “the fragmented audience was the best thing that could have happened to television.”

What it meant was that TV shows now didn’t have to have universal appeal. A show could still be successful with a slice of the audience pie as long as that slice was passionately loyal. This led to execs and showrunners being more willing to take creative risks, laying the groundwork for that big bang Sepinwall mentioned.

In “an interesting role reversal” with the movie biz, the TV revolution gained momentum as “the 21st century slowly saw the extinction of the middle-class movie. If a film couldn’t either be made on the cheap or guarantee an opening weekend of $50 million or more, it was out.” That meant that studios began to depend heavily on big-spectacle blockbusters (something I touched on in the previous article in this series). “Movies went from something really interesting,” as The Sopranos creator David Chase put it, “to what we have now.”

That left a growing void of more artistically and dramatically compelling fare – a void that television filled with Sepinwall’s list of the dozen American shows “that changed TV forever,” as his subtitle puts it: The Sopranos, Oz, The Wire, Deadwood, The Shield, Lost, Buffy the Vampire Slayer, 24, Battlestar Galactica, Friday Night Lights, and of course, Mad Men and Breaking Bad.

As an example of these revolutionary shows, Sepinwall points to the balls-out opening of Breaking Bad, in which former sitcom father Bryan Cranston’s character – a middle-aged, cancer-ridden chemistry teacher wearing saggy tighty-whities and a gas mask – careens down a desert highway in a mobile meth lab, a dying pair of drug dealers on the vehicle floor behind him. At the end of that jaw-dropping sequence, your inevitable two responses are “What the hell was that?” followed by “More, please. Now.”

The revolution didn’t materialize ex nihilo: “The millennial wave of revolutionary dramas,” Sepinwall writes, “was built on the work put in by a group of other series” that paved the way: cop dramas like Hill Street Blues and NYPD Blue, the hospital dramas St. Elsewhere and ER, the sitcom Cheers, the “MTV cops” of Miami Vice, the hallucinatory Twin Peaks, The X-Files, and others.

The Revolution was Televised is nonstop fun, fascinating reading for anyone interested in the behind-the-scenes process from pilot to series finale of today’s best and most influential shows, and the entertainment revolution comprised of them. Fellow critic Tim Goodman writes that “even if you know the backstories, even if you agree or disagree with his choices, the actual telling of the tale is addictive and wipes out any sense that you've heard the story before.” It serves as an interesting counterpoint to the book I wrote about last time, Do the Movies Have a Future? In a sense, Sepinwall’s answer to that title question is, “With television this good, who cares?”