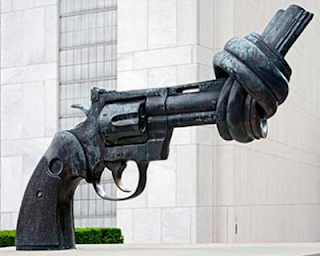 “You never want a serious crisis to go to waste,” said President Obama’s former consigliere Rahm Emanuel, who is now the mayor of the strictly gun-controlled gun murder capital of the world, Chicago. So naturally the statist anti-gun utopians see opportunity in Friday’s Newtown school massacre to push the total gun ban they’ve been lusting after for so long.

Rather than pause long enough to grieve with the rest of us over the horrific murders of twenty children and six adults at a Connecticut elementary school; rather than wait for the media frenzy to subside so all the facts could be known; rather than honor the victims’ families and friends by refusing to politicize the nightmare, all the usual 2nd Amendment-hating suspects wasted no time pushing their agenda in the ghoulish media and accusing gun proponents of having blood on their collective hands.

Democratic Senators Dianne Feinstein, Dick Durbin, and Richard Blumenthal, among others, vowed to introduce gun-ban legislation immediately. New York Mayor Michael Bloomberg, a man who never saw a human behavior he didn’t want the state to control, said in true totalitarian fashion that Obama has “to tell this country what to do.” Speaking of totalitarians, the Communist Chinese, who always have America’s best interests at heart, are now siding with the gun-ban fascists and urging Obama to “make preparation for a protracted war” to make it happen. Quelle surprise.

When Democratic Representative Jerrold Nadler from New York was asked on MSNBC’s The Ed Show whether the Newtown shooting could be the turning point in the gun control debate, he replied, “I think we will be there if the president exploits it, and otherwise we’ll go on to the next” incident [emphasis added]. Perhaps “exploit” was just a poor choice of words; more likely it is just unintentionally revealing about the Democrats’ Alinskyite manipulation.

And of course Michael Moore, apologist for the mass murderer Fidel Castro, swiftly took to Twitter, which has become the medium of choice for inane grandstanding by narcissistic celebrities on current event topics that no one asked them about. The propagandist behind Bowling for Columbine tweeted that “the way to honor these dead children is to demand strict gun control, free mental health care, and an end to violence as public policy.”

I have no idea what violent public policy he’s talking about, but it probably has to do with the war we’re already not waging against Islamic fundamentalists who kill our soldiers with impunity now both abroad (green-on-blue killings, anyone?) and at home (remember the workplace violence at Ft. Hood? Those soldiers were unarmed because base protocol forbade it, enabling jihadist Nidal Hasan to slaughter his victims, including a pregnant woman, at will).

As for strict gun control, we already have that. The apparently insane Newtown shooter violated numerous gun laws in the commission of his crimes. Funny how that works – the evil aren’t constrained by laws, and they take full advantage of gun-free zones like Ft. Hood and schools to carry out their demonic mission.

Moore went on to target the National Rifle Association with a particularly vile tweet: “The NRA hates freedom. They don’t want you to have the freedom to send your children to school & expect them to come home alive.” This is typical progressive projection. It is the totalitarian left that hates freedom. The hypocrite 1%er Moore, with his armed bodyguards, has never been unwilling to exploit the deaths of children in his obsession with ensuring that arms are limited to the state and to criminals – or is that redundant?

Let me be clear, as Obama is fond of saying: the statists aren’t talking about stricter gun control. They want a total ban on guns in America. “I don’t think people should be able to own guns,” Obama once reportedly told gun rights advocate John Lott. And so in his statement after the massacre he promises “meaningful action.” Keep in mind that our President wants to disarm Americans while shipping more fighter jets and tanks to the Egyptian Muslim Brotherhood.

Attorney General Eric Holder doesn’t have a warm fuzzy feeling about guns either. Holder once said that he wanted a campaign to “really brainwash people into thinking about guns in a vastly different way” and to “change the hearts and minds of people in Washington, DC” about guns. About the Newtown massacre, he said,

As a nation I think we have to ask ourselves some hard questions. We gather too often to talk about these kinds of incidents. We need to discuss who we are as a nation, talk about the freedoms that we have, the rights that we have and how those might be used in a responsible way.

Translation: it’s our rights and freedoms that are irresponsible, not criminals and the insane, so we need to curtail them. This is the same Attorney General who ducks responsibility for the Fast and Furious program that fed weapons into the hands of Mexican drug cartels. Again, the Obama administration has no compunction about disarming American citizens and arming America’s enemies.

The mass shooting at Sandy Hook Elementary School has pierced the heart of every American. The horror of it is unimaginable. Who is to blame? “I’ll tell you who’s to blame,” opined a blogger for the left-leaning Slate. “You are. I am. Everyone is.” This is typical of the left’s inability to comprehend the notion of personal responsibility. “Society” is always to blame (except when it’s more convenient to blame Bush or Cheney). In fact, Adam Lanza is to blame. It’s too soon to know yet just what his mental condition was and whether or not it was being mismanaged; perhaps warning signs were ignored, in which case that national conversation needs to take place. But banning guns is not the answer.

Holder is partly correct – we do need to discuss who we are as a nation and talk about the freedoms and rights that we have, such as the 1st and 2nd Amendments, and how the totalitarian left under Obama is capitalizing on Friday’s horror to deny Americans those freedoms and rights.