United in Hate: The Left Dances on Breitbart’s Grave 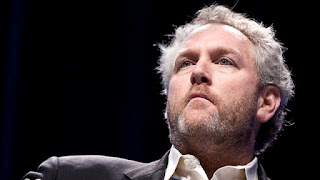 When SEAL Team Six took out Osama bin Laden last year, there was widespread celebration across America. Many on the political left, however, affected a moral revulsion at the jubilation. Celebrating the death of any man is unseemly, immoral, even anti-American, they argued.
Any man except a political enemy, that is. As soon as the news spread of last week’s untimely death of conservative super-journalist Andrew Breitbart, many began dancing on their arch-enemy’s grave in gleeful, macabre celebration.
Breitbart, 43, was the relentless, charismatic warrior behind the conservative new media that was pounding the left with devastating exposés on ACORN, Pigford, and “Weinergate,” among others. Like other conservative political pugilists such as David Horowitz, Breitbart was a former leftist himself who understood well that politics is war, and that the left fights to win. He railed against the inability of conservatives to grasp this, and urged them to go on the offensive and destroy the left’s hateful false narrative. Also like Horowitz, Breitbart’s intimate understanding of the enemy earned him their most vicious hatred.
And so, immediately as the news of his death broke, the left began lobbing disgusting and ghoulish volleys online. Conservative websites like blogger Michelle Malkin began compiling a repugnant litany from the social network Twitter, such as this sensitive eulogy:  “America truly lost an asshole. I’m sure Satan will treat him good.” This is precisely the kind of ugliness directed at the bulletproof Breitbart on Twitter on a daily basis, which he enjoyed retweeting to his many followers in order to expose the left’s true nature.

TheBlaze.com listed more tweets which reveal their barely literate authors’ unrestrained ugliness and cruelty:
@darrenfiorello: Andrew Breitbart died? Is it wrong that I’m happier about that than when they got bin Laden and Saddam?
@johnkapp: Andrew Breitbart was a racist, sexist, homophobe. Good riddance.
@jeffglasse: Andrew Breitbart now enjoying afternoon tea with Hitler #goodriddanceyouhack
@AlmightyBob: @AndrewBreitbart haha youre dead and in hell being a gay with hitler
@Chico Delainky: I wonder how #AndrewBreitbart died? If he was found with some type of foreign object in his butt., that would be really funny.
@dufus: Did we cry when Hitler died? No.. #Breitbart see you in hell asshole
And how about this particularly depraved gem?
alex prestin‏@doublemewa  My only hope today is that #AndrewBreitbart gave his entire family #AIDS before mercifully shuffling off this mortal coil.
That’s right: in addition to celebrating his death, Alex Prestin wishes AIDS on Breitbart’s widow and four young children.
Of course, anyone who has spent fifteen minutes on the internet knows that it is ordinarily packed to the virtual gills anyway with mean-spirited bullies emboldened by anonymity. Yet even keeping that in mind, it’s difficult for decent human beings to comprehend the vicious glee over Breitbart’s demise, just as it’s mystifying why so many on the left irrationally view him as worse than Hitler, Saddam Hussein, and bin Laden.
But, you say, these are just Occupy movement losers venting their powerlessness from their parents’ basements, right? They don’t represent the sentiments of the more responsible mainstream left, do they?
CNN attacked Breitbart within hours of his death. Former NAACP leader Julian Bond wrote that Breitbart’s passing “disproves the adage that only the good die young.” A political blogger for Rolling Stone titled his celebratory memorial, “Andrew Breitbart: Death of a Douche.” (For the many of you unfamiliar with it, Rolling Stone is ostensibly a music magazine, Teen Beat for aging hipsters, that ceased being relevant and cutting-edge once gonzo journalist Hunter S. Thompson stopped contributing regularly).
What accounts for this irrational hatred, this ecstatic defilement of the dead? As FrontPage editor Jamie Glazov notes in his important book United in Hate: The Left’s Romance with Tyranny and Terror, the left shares a nihilistic impulse for death and destruction – of themselves as well as others. This impetus is like the shadow side of philosopher Henri Bergman’s concept of a propulsive life force, the élan vital – it’s an élan mortel, coursing through the left’s dark heart.
At bottom, leftists cherish their vision of a perfect world, and hate humankind for standing in the way of it. They will not hesitate to sacrifice tens of millions to draw nearer to their utopian fantasies, which is why they secretly (or not-so-secretly) worship genocidal totalitarians. “The death of one man is a tragedy,” Stalin once remarked. “The death of millions is a statistic.” The left’s beloved poster boy, vile coward Ché Guevara, once expressed his disappointment that Cuba was never able to use nuclear weapons against New Yorkers: “We must proceed along the path of liberation even if this costs millions of atomic victims.”
The left will gladly enforce mass sterilization and forced abortions for the sake of the planet. They will happily eliminate 25 million capitalists, as Bill Ayers and the Weatherman estimated, and consign many more to starvation or gulags in pursuit of their people’s paradise. They will forgive, even cheer, even submit themselves to the blood-soaked excesses of Stalin, Mao, and the French Revolution as a necessary purgation on the road to their ideal. As Glazov writes, “[the left] loves murderous nihilism and lives vicariously through its deadly manifestations.”
Totalitarianism is neat and orderly. Freedom is messy and imperfect. It values and empowers individuals, which the left cannot tolerate. The freedom-loving Breitbart not only threatened the left’s collective vision, but he was also exposing their hypocrisy and hate. That’s why the left asserts ludicrously that he was worse than those icons of evil, Hitler, Saddam Hussein, and bin Laden.
When the left claims to celebrate the death of no man, remember Andrew Breitbart, and remember that they are lying. They celebrate death itself.
(This article originally appeared here on FrontPage Mag, 3/12/12)
at 12:39:00 AM