The Muslims Next Door 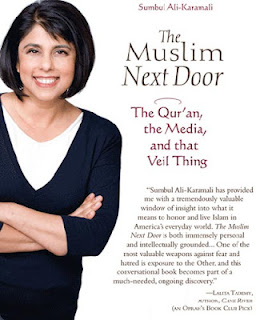 Now celebrating its tenth anniversary, Silicon Valley Reads is a program that encourages everyone in northern California’s Santa Clara County “to read the same book, at the same time, and talk about it.” If you think this sounds like a program ripe for abuse by progressives in our educational system promoting groupthink about a social agenda, go to the head of the class.


The program is presented by the Santa Clara County Office of Education, Santa Clara County Library and the San Jose Public Library Foundation, with funding from foundations, nonprofits, corporations, and private donors. Each year it offers several dozen free public events at libraries, schools, and other community locations. Speakers and panels, a film festival, book discussion groups, essay contests, teen book groups and children’s story times are all part of a concerted effort to focus the community on a given theme. According to their website,
between 4,000-5,000 individuals attend these events and thousands more read the featured books on their own, for high school and college assignments, and with their book clubs…
And of course, no progressive indoctrination is complete unless it targets children:


Silicon Valley Reads has also recommended companion books for children with themes similar to the featured book for adults. This allows families to read together and to discuss contemporary issues and themes.
The themes of past book selections have included illegal immigration, WWII Japanese internment, racism, and censorship. Now we come to the theme for 2012, kicking off on January 25: “Muslim and American – Two Perspectives.” If you suspect that the program will consist of the usual disinformation about Islam and whitewashing of its darker aspects, then you get a gold star.


One of the program’s two book selections is The Muslim Next Door, sporting the cutesy subtitle The Qur'an, the Media, and That Veil Thing and a disarming cover photo of author Sumbul Ali-Karamali smiling warmly. As she writes on the program’s website,
I hope this is only one step in many that will serve to erase misconceptions and build intercultural understanding.
In the ten-year span since 9/11, more non-Muslims than ever before have undertaken to learn about the Religion of Peace and are alarmed and disgusted by the totalitarianism, misogyny, violence, supremacism, and Jew-hatred that are evident in the foundational texts of Islam, in the pronouncements of its most respected imams, and in the behavior of its fundamentalist adherents around the world. And yet Muslims still insist that we’re laboring under ignorance and misconceptions; that our irrational fear, racism and cultural myopia are the problem; that if we just unquestioningly accept the vapidity of interfaith dialogue and the soothing reassurances of such non-threatening, Westernized apologists as the ones featured in Silicon Valley Reads, we’ll finally understand that worldwide jihad and all-encompassing sharia are nothing to fear.


The other book selection is The Butterfly Mosque: A Young American Woman's Journey to Love and Islam by G. Willow Wilson, a Muslim convert who struggled to come to grips with “that veil thing” and ended by proclaiming that a woman in the Middle East “is far less free than a woman in the West, but far more appreciated.” The book comes with a front cover blurb by the rock star of academic apologists for Islamic supremacism, Reza Aslan. Ms. Wilson writes on the Silicon Valley Reads site that
the topic of Islam is loaded with emotional and political baggage, and only through open and honest communication can Muslims and non-Muslims come to a better understanding of one another.
I couldn’t agree more. Indeed Islam is loaded with emotional and political baggage, and I hope that, in the spirit of that “open and honest communication,” she will openly and honestly acknowledge the reasons why.


The 2012 Silicon Valley Reads program also features a panel discussion called “Paranoid Politics – Islamophobia, McCarthyism and the Yellow Peril,” described thusly:
Muslims are not the first group in America to be targeted by paranoid people who are afraid and looking for someone to blame. This will cover three periods in U.S. history when groups who are “different” – Muslims since 9/11, Jews during the McCarthy Communist witch hunts, and Asians during World War II – were persecuted in politics and the media.
Of course, American Muslims are not being targeted, and non-Muslims outraged about sharia and jihad are not “paranoid people looking for someone to blame.” Any reasonable person who follows the news is justifiably concerned about Islam not because Muslims are “different” but because Muslim fundamentalists have openly declared war on Western civilization and are waging global jihad, including on our own soil. Real-world Islamic terrorism and creeping sharia are the issues, not the phantom red herring “Islamophobia.”


The panelists include playwright Wajahat Ali, lead author of “Fear Inc., The Roots of the Islamophobia Network in America,” a leftist propaganda bludgeon from the Soros-funded Center for American Progress which numerous FrontPage writers have exposed and discredited.
There’s more. In addition to an exhibit of Islamic art called “Invoking Peace,” there will be screenings of films in conjunction with the project. Among them are the disingenuous fluff bio-pic Muhammad: Legacy of a Prophet, which, as Robert Spencer notes, “studiously avoid[s] any mention of the more unsavory elements of the Prophet of Islam's enduring example”; Inside Islam: What a Billion Muslims Really Think, based on the manipulated work of Saudi-funded academic apologist John Esposito and Obama Muslim adviser Dahlia Mogahed; and Prince Among Slaves, the true story of an African prince sold into slavery in the American South. Who knows? Perhaps the latter will spark discussion about the slavery still being carried on by some Muslims today.


“Muslim and American – Two Perspectives” is a perfectly valid topic for community discussion and study – but only if interfaith dialogue stops being a monologue that runs in one direction only: from Muslim to non-Muslim. Only if Muslims stop slapping a smiley face on Islamic theology, and stop blaming the media and non-Muslim ignorance/prejudice for Islam’s bad reputation. Only if the voices of Muslim apostates like Ibn Warraq and Nonie Darwish are heard, and their books shared and discussed. Only if it includes panel discussions and documentaries on the tsunami of Islamic Jew-hatred swelling in the wake of the “Arab Spring,” or on the genocide being intensified against Christians anywhere that Muslim fundamentalists hold sway, or on the war being waged on freedom of speech by the Organization of Islamic Cooperation in collusion with Hillary Clinton and the Obama administration.
Then we could begin to have a more honest and productive program than the whitewashed pap being served up this year by the Silicon Valley Reads propagandists.