The Wages of Appeasement: An Interview with the Author 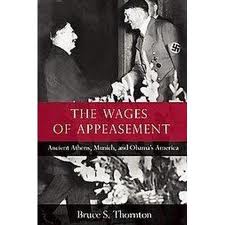 British Prime Minister Neville Chamberlain, who famously returned from a conference with Hitler and announced appeasement in our time, may be history’s poster boy for political impotence and naïveté. But in the new book, The Wages of Appeasement: Ancient Athens, Munich, and Obama’s America, Bruce S. Thornton notes that the temptation to placate an enemy seeking one’s destruction is “as old as conflict itself.”
The book assesses three notable examples of societies’ futile, disastrous responses to the aggression of determined enemies: the Greek city-states threatened by the shrewd Philip II of confronted by Hitler, and now the West’s clash of civilizations with “a renascent Islamic jihad and its most powerful state sponsor, .” Its message couldn’t be more timely and vital.
Front Page contributor Bruce Thornton is a professor of classics and humanities at in . A National Fellow at the Hoover Institution, he’s the author of Decline and Fall: Europe’s Slow-Motion Suicide, Greek Ways: How the Greeks Created Western Civilization, six other books, and numerous essays on Western culture.
Mark Tapson: Dr. Thornton, what was the inspiration for a book about appeasement? What prompted you to see timeless similarities in the different historical settings of ancient , pre-WWII , and under Obama?
Bruce Thornton: The idea arose out of many conversations I've had with [fellow historian] Victor Hanson about the value of historical comparisons for illuminating our own times. I think we've been particularly struck by President Obama's foreign policy philosophy, which in some cases eerily mimics the naive idealism not just of Jimmy Carter but of someone like Neville Chamberlain.
These three instances are interesting to compare because they are all constitutional governments faced with autocratic and illiberal aggressors. Thus appeasement is not just a consequence of this or that particular leader's weakness, but also reflects the weaknesses of democratic governments, particularly in foreign policy.


MT: How does democracy itself put us at a disadvantage against such “illiberal aggressors”?

BT: The glories of representative government are the replacement of force with discussion and persuasion, and the holding of politicians accountable to citizens through audit, elections, laws, and the rest. However, the reliance on discussion and verbal process makes it easy to substitute words for action when action is needed. And when leaders are held to citizen scrutiny and have to face election or audit, they find it more expedient to kick problems down the road rather than call on the citizens to make unpleasant sacrifices.


Yet within six months, all that righteous anger and determination were starting to dissipate, and we were back to our old bad habits, donning the hair-shirt of foreign policy crimes, wondering what we had done to provoke the attack, undermining and criticizing the Bush administration's attempts to make sure such an attack never happened again.
So if 3000 dead, two skyscrapers knocked down, and a trillion-dollar hit to our economy weren't enough, what will be? And even then, will we unsheathe the “terrible swift sword,” or will we use appeasement to buy a few more years of quiet and leisure, pretending not to notice as more and more of our freedom disappears? I suppose we all will have to wait and see.