Plumbing the Depths of the Left's Psychosis 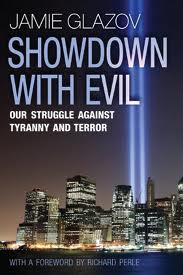 Showdown with Evil: Our Struggle Against Tyranny and Terror
By Jamie Glazov
(Mantua Books, 255 pages, $18.00)
and the are undergoing upheavals that will forever alter the face of global politics. is wrestling for its life with a swelling population of young radicals seeking the Islamization of the West. And ’s culture war is on the brink of becoming civil war as the far Left brazenly presses its advantage under the presidency of one of its own. These are tumultuous, unsettling times, and a recent book lays the groundwork for coming to grips with them.
In 2009  Jamie Glazov, managing editor of David Horowitz's Front Page website, released his first book United in Hate: The Left’s Romance with Tyranny and Terror, an incisive, devastating examination of the psychosis behind the Left’s deification of totalitarian ideologies.
Glazov’s timely followup effort is Showdown with Evil: Our Struggle Against Tyranny and Terror, from Mantua Books. is a Canadian press that describes itself as publishing works “relating to the struggle of the West to preserve its freedoms in the face of Islamo-Fascism,” books that “go beyond the headlines to explore the underlying values and ideologies that explain current politics and culture wars.”
Showdown with Evil is the perfect embodiment of that mission statement. It is a relentlessly enlightening, entertaining, and engaging collection of twenty-nine interviews conducted over the course of the last several years by Glazov for Front Page. As former Assistant Secretary of Defense Richard Perle states in his foreword, this is “an illuminating and important commentary on the largest issues facing and the West,” particularly the “Islamist agenda that has replaced communism as the principal threat to western values and civilization.”


In chapters of easily digestible length, ranging from three to eighteen pages each, Glazov probes the impressive minds of many of today’s most courageous conservative intellects, among them Victor Davis Hanson in “Obama’s Tortured Rendezvous with Reality,” Phyllis Chesler on “the Death of Feminism,” Brigitte Gabriel on “Defeating Radical Islam,” Natan Sharansky, Andy C. McCarthy, Christopher Hitchens, Theodore Dalrymple, Phyllis Chesler, Horowitz himself, even William F. Buckley, Jr. National Review editor Rich Lowry discusses his rollercoaster thriller Banquo’s Ghost. Terrorism expert Steven Emerson exposes the “Grand Deception” of radical Islam’s infiltration of the government and media. Scholar of Islam Robert Spencer addresses the media’s inability to comprehend the shooting as jihad. And that’s not even half of the contributors.
The chapters are grouped into such topics as “Obama's Destructive Path,” the “Unholy Alliance” (between the Left and Islamofascism), “The Terror War,” and “The Evil Empire” (about Glazov’s homeland , from the Cold War to the present). A section titled “Leaving the Faith” features deeply personal and intellectually honest tales of political conversion from Left to Right by novelist-screenwriter Andrew Klavan, former Palestinian terrorist Walid Shoebat, and blogger Charles Winecoff. Although one of the lesser-known contributors to Showdown, Winecoff opens up about “coming out” as a gay conservative in one of the most unique and articulate pieces in the book.
Each section is capably and briefly introduced by David Swindle, the smart young editor of Horowitz's NewsReal Blog. In a concluding section called “Looking to the Future of Freedom,” Swindle also conducts the thirtieth interview, of Glazov himself. Glazov, whose experience with totalitarianism derives from his own parents’ struggles as Soviet dissidents, is no less honest and passionate an interview subject than the others.
It is that moral and intellectual passion and curiosity that enables Glazov to interview his subjects in a way that more resembles a deeply engaging meeting of the minds than a dry, perfunctory question-and-answer session. He plays Dante to Mohammad Asghar’s Virgil in a tour through Islamic heaven and hell, spars respectfully with iconoclastic atheist Hitchens, then engages in a light, feisty exchange with firebrand Ann Coulter (is she ever anything less than feisty?). Throughout, Glazov never fails to draw out the best from his formidable guests.
Showdown abounds with gems like this one from Klavan, describing the religion of the left as “an elaborate system for hiding shame behind a cheap mask of virtue.” David Horowitz elaborates on that in his own thoughts on leftism as religion: “The left is really a crypto-religion; it is a collective delusion. It is based on the inability of its adherents to come to terms with the real world, the actually existing world, with their own mortality, with human limits.”
In a collection of this sort, one would ordinarily expect some peaks and valleys in quality. Here there are no dips in quality (with the possible exception of Dalrymple’s disappointing contribution about opiate addiction, which I found less relevant to the book’s themes), only in length: a very few pieces are frustratingly short, such as Norman Podhoretz’s discussion of his book World War IV: The Long Struggle Against Islamofascism, in which he sets out to make “a full-throated, whole-hearted statement of the case for the Bush Doctrine” and remind its detractors “how World War IV started, what the stakes are, and why we have to win.” Or Hanson’s discussion of what Glazov calls the Obama administration’s “dance with denial” about our Islamist enemy. Such offerings left me wanting more – which ultimately is more of a compliment than a criticism.
For anyone concerned about issues of national security, Obama's impact on the future of , the threat of fundamentalist Islam and the complicity of the Left, and the conflict between freedom and tyranny, then Jamie Glazov’s collection, Showdown with Evil, is a must-have guide to the dangerous discord of our times.