The World Turned Upside Down: An Interview with Author Melanie Phillips 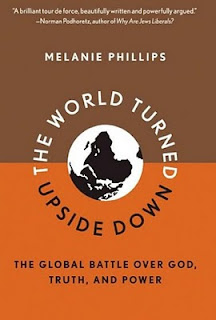 There are few more trenchant, fearless, and necessary cultural critics than Melanie Phillips. A columnist for London’s Daily Mail and winner of the 1996 Orwell Prize for journalism, she is the author of a number of books, most notably the brilliant Londonistan

(2006), which chronicled the cultural decay that paved the way for England to become the epicenter of “Eurabia.”

Now her wide-ranging new book, The World Turned Upside Down

, provocatively subtitled “The Global Battle Over God, Truth, and Power,” chronicles how the West has moved from the Enlightenment to the Age of Unreason, when rationality and truth have given way to ideology and propaganda. “Power,” she writes, “has now hijacked truth and made it subservient to its own ends. The result is a world turned upside down.”

I was honored to meet Melanie Phillips at her speaking engagement Monday at the Beverly Hills Four Seasons Hotel, and she graciously agreed to an interview.

MT: You note that the Enlightenment, which sought to sweep away all the problems of the world by freeing the intellect from religious suppression, has proven to be a failed utopian experiment. Where did the Enlightenment go wrong?
MP: It's a mistake, I think, to assume that the Enlightenment was a homogeneous movement of thought. As Gertrude Himmelfarb has written, there were actually three Enlightenments – the English/Scottish, the French, and the American, and they were all different. While the English/Scottish Enlightenment thinkers were merely against clerical abuses but assumed the Judeo-Christian moral framework continued to set the ethical guidelines for society, French thinkers were against all religion.

What we are seeing today is the dominance of that French atheist position but also, even more important, the dominance of counter-Enlightenment thinking. This was embodied in the German Romantic movement which represented an onslaught against reason – and foreshadowed the totalitarian movements of the last century of which our current deformation of thinking, cultural totalitarianism, is but a mutant manifestation.

MT: Toynbee famously said that civilizations die by suicide, not murder. Are you optimistic or pessimistic that Western civilization can reverse its slide into unreason, re-embrace its Judeo-Christian values, and defend itself against the enemies of modernity and truth?
MP: Um... pass! Look, there are two historical examples that I have constantly in my mind. One is 18th century England, when people like me were sitting around in coffee-houses predicting the end of Britain because of the general culture of debauchery and moral collapse. Yet this turned into the 19th century, one of the greatest periods of British power in the whole of its history. So that's one historical example. The other is ancient Rome – which collapsed.
So which will it be? Who can tell? Prediction is a mug's game, is it not? The fact is that the ordinary people are beside themselves with anxiety and fury about the undermining and willed collapse by the intelligentsia of the culture to which they belong. Will they pull the west back from the edge of the cultural cliff? Who knows? All we can do is sound the alarm as loudly as we can.
(This article originally appeared at Front Page)
at 11:01:00 PM