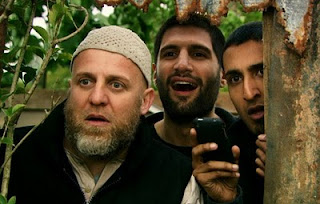 Can a comedy about jihad make us laugh? Certainly there’s not an iota of humor to be found in the ruins of the World Trade Center, or the massacres in Mumbai or London or Madrid or Ft. Hood or Beslan or Tel Aviv or anyplace else where murderous Muslim fundamentalists have struck.

But writers through the ages have successfully employed satire and farce to empower their audiences to confront ugly realities of power, politics, and war. With drama, the entertainment industry has had mixed success at best coming to grips with the threat of Islamic terrorism; but perhaps comedy, handled correctly, could open up an accessible perspective on this grimmest of contemporary topics.

It's been tried before, though the project never got off the ground. In 2004, screenwriters Mark Legan and Mark Wilding collaborated on a spec sitcom pilot called The Cell, about a band of inept Muslim terrorists sent to America to blend in with the culture and ultimately blow up a power plant. The comic twist is, the jihadists are unable to resist being seduced by American pop culture – Domino’s pizzas, big-screen TVs, talk shows and bowling leagues – and have to conceal their unwillingness to carry out violent jihad from a ruthless superior who shows up to check on their progress. Legan and Wilding wrote it for themselves with absolutely no expectation that any studio would run with it – and they were right, no one would touch it. But the unproduced script (you can download it here) was an “underground” hit with enough executives throughout Hollywood that the writers were offered other work.

Although the concept is funnier than their execution of it, those writers found humor in a subject of the most tragic gravity through sympathetic characters whose totalitarian ideology is defused safely by American freedom and abundance. Toothless? Perhaps, but it would have been a start had not political correctness buried it.

So I was eager to see the new British film Four Lions, directed by Chris Morris and written by Jesse Armstrong, who co-wrote the recent Brit political comedy In the Loop. The trailer showed comic potential, and I hoped it would be a cathartic, hilarious, politically incorrect attack exposing and ridiculing the fanatics that Hollywood normally bends over backward to appease.
In the movie, which opened last weekend, young Londoner Omar is frustrated with the group of fellow jihadists he has assembled to carry out a terrorist attack: the mentally deficient Waj, whose suggestion is that they “bomb the internet”; the fanatical but dense convert Barry, whose idea is to dress up like infidels and blow up a mosque, thus turning moderates into radicals and sparking a full-out holy war; clueless Fessal, who wants to train explosives-laden crows to fly into targets; and wannabe rapper Hassan, who is full of blustery posturing but has reservations about actual martyrdom.

Omar ultimately decides they will target the heavily populated London Marathon with multiple suicide bombings, striking a grand blow for Allah and earning Paradise. Sound hilarious? I didn’t think so either. They head out on their mission as Hassan leads the other terrorists in a carefree singalong of the 70’s hit “Dancing in the Moonlight.” Eventually the film’s already confused tone goes completely off the rails with a stunningly abrupt, dark climax, followed by a farcical denouement as the credits roll.

There are some theoretically funny moments (many of which are already in the trailer). Barry, for example, complains that these are "the end times, with women talking back, and people playing stringed instruments.” Perhaps the best line of the film comes when the group’s rattletrap car breaks down and Barry blames it on Jewish spark plugs, part of "their plot to control global traffic.”

But these lines exemplify precisely why this film’s tone is so mixed and why it fails as a comedy. It’s hard to laugh at Barry’s complaint about uppity women and musical instruments when there are real-world fundamentalists stoning women and bombing CD shops because music is “un-Islamic.” It’s hard to laugh at his loony accusation about Jewish car parts when the Muslim world is rife with just this kind of irrational Jew-hating conspiracy theory, and Jews get killed for it. It’s impossible to find it funny when Fessal talks about targeting Jews and “slags” – British slang for sluts, by which he means uncovered women who go to dance clubs – when one remembers the two car bombs, loaded with nails for extra carnage, parked outside a popular London nightclub in 2007, intended to go off on “Ladies Night” to kill as many slags as possible. As much as I wanted this comedy to succeed, I found it impossible to separate such jokes from their disturbing real-world context. I don't think I was alone - there was mostly silence and even a couple of walkouts in the theater where I saw it.

The actors are all talented, but how are we to find any of their characters, except perhaps the easily manipulated moron Waj, sympathetic? The main character Omar is the least sympathetic of all. At least the others are bumbling ignoramuses, but Omar has a quick, sharp, clear intellect. His driving purpose is to go to Paradise smiling, having killed many kuffars, or infidels. His seemingly modern, Westernized wife supports this, and he has indoctrinated his nine-year-old son with the same hatred, woven into bedtime tales of The Lion King (upon Omar’s return from a Pakistani terror training camp, the boy asks eagerly, “Did you kill many kuffars?”). When his dull-witted friend Waj begins to be morally troubled by their plan, Omar hurriedly manipulates him back into murderous enthusiasm again (“Satan is confusing you, brother!”).

That’s not funny – it’s disturbing. And the film suffers from too much of this. It’s marginally funny when one character clumsily blows himself up; it’s not funny at all when one character blows up another on purpose to prevent him from surrendering to the cops and exposing the plot. It’s not funny when the British version of a SWAT team bursts into a hostage situation and shoots the wrong man dead. I could go on but I've already hinted at too many spoilers.
Director Morris, who apparently immersed himself in years of researching Islamic terrorism, asserts that he is trying to ridicule Islamic fanaticism and its most bumbling adherents:


I was reading about a serious subject, but kept finding things that were very
silly. For example, there were some guys in Yemen that wanted to blow up a U.S.
warship with an exploding boat; they got to the quayside at 3 in the morning.
They put their launch in the water and filled it with explosives and it
sank.

“Silly” by itself perhaps – except that the next time those guys in Yemen tried, they blew a gaping hole in the side of the USS Cole and killed seventeen American sailors, wounding thirty-nine. Not so funny. The failed Christmas Underwear Bomber was the stuff of comedy – but had he brought that plane down and killed everyone aboard, which he very nearly did, no one would be laughing.

To its credit, Four Lions is an audacious break from the entertainment world’s taboo against honest, authentic depictions of jihadists, or at least the inept ones. But unfortunately its merry band of terrorists are too grounded in horrific reality to succeed as comedy.