A Child is Not Dead: Philippe Karsenty and the al Dura Hoax 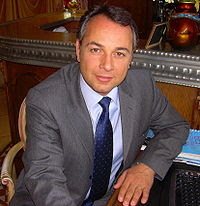 On September 30, 2000, Charles Enderlin, the Israel bureau chief of the France 2 television network, received an urgent call from his cameraman. It was the beginning of the Second Palestinian Intifada, and Talal Abu Rahma claimed to be filming a firefight between Palestinian protesters and Israeli forces at the Netzarim junction in the Gaza strip. He sent Enderlin footage of a panicked young boy caught and killed in the crossfire as his father tried in vain to protect him from Israeli troops, whom Rahma accused of purposely targeting the defenseless pair. Enderlin added a voiceover grimly narrating the boy’s death and hurried the footage to France 2.
The disturbing video circled the world faster than you can say “blood libel” and aroused international condemnation of Israel. Images of the atrocity immediately achieved iconic status as confirmation of Israeli brutality and Palestinian victimhood. It inflamed the Intifada, which left thousands dead. Bin Laden even referred to the boy’s death in a taped warning to America, and the now-familiar image of the al Duras under fire appeared in the background of the videotaped beheading of Jewish-American journalist Daniel Pearl. Streets, parks, youth camps and public buildings have been named in Mohammed al Dura's honor. His image adorns stamps and monuments.

Yet suspicions arose that the boy’s martyrdom was not only untrue, but actually staged for the cameras, for a gullible media all-too-eager to paint Israel in a damning light. As Pajamas Media’s Paris editor Nidra Poller put it put it, “the husk, the raw footage that would reveal the fakery, had been removed, leaving the kernel rich in anti-Israel nutrients.”

Thanks to a 2002 German TV documentary and the work of Israeli investigators, Philippe Karsenty, now a French media analyst, saw the dramatized shooting as a new blood libel against the Jews, and felt compelled to challenge its authenticity: “There is nothing in the film that proves that al Dura was shot to death, or shot at all in this incident,” he says.

The director of the Israel Government Press Office also accused Enderlin and Rahma of a "modern blood libel" against Israel, and Rahma of the "systematic staging of action scenes.” French reporters acknowledge that such Palestinian staging of news events happens all the time. Despite this, and despite the evidence Karsenty has subsequently marshaled to expose the killing as a hoax, European media, politicians and intellectuals closed ranks against his inconvenient truth and subjected him to defamation, threats, and lawsuits. Why?

Israel is very much hated in France. It is seen as a strong and wealthy country
whose army acts like the Nazis. My decision to fight has angered many people,
not only in the French establishment, but in the Jewish community as well. Many
Jews and non-Jews have told me that I'm right, but that they can't support me
publicly, because they can't fight the establishment. They have too much to
lose.

Even the Israeli authorities themselves resisted Karsenty’s exoneration. “In Israel they wanted to forget the whole affair,” he says.

Now, in conjunction with the recent tenth anniversary of the al Dura incident, Charles Enderlin continues to promote the orthodox narrative by publishing a book about it; Un Enfant est Mort (A Child is Dead) has swiftly become a bestseller in France and the winner of the Prix Gondecourt literary prize. As an indication of how big a thorn in his side Karsenty has become, Enderlin mentions him 114 times in the book, making his nemesis virtually as central a character as Mohammed al Dura himself.

Throughout his travails, the urbane Karsenty has held steadfast to his pursuit of truth: “I'm fighting for the sake of history.” David Solway calls him “a man notable for his sense of justice, crusading energy and his belief in the eventual triumph of the truth,” “a man who has put the timid and the calumnious, the liars and hypocrites and cringers among us, to shame and amply merits the title of ‘a hero of our time.’”

I interviewed Mr. Karsenty after his presentation last week in Los Angeles:

MT: Prior to your current work as the director of Media Ratings in France, you were a successful stockbroker. Was it the al Dura incident that led you to switch careers and start up a media analysis enterprise?

PK: No, at that time I had already left the stockbrokerage industry. I had a small internet company. Yes, the al Dura story and the other lies in the media outlets are the frauds which compelled me to change careers and create my own media watchdog company.

MT: Why did the worldwide media rush so unquestioningly to broadcast the incident, and why do they continue to resist the evidence of a hoax? Conspiracy? Simple gullibility or bias? Anti-Semitism?

PK: Not a conspiracy, but gullibility, bias and following the narrative which was created decades ago: that Israel is criminal and the Arabs the good guys. The media rushed to broadcast the incident for the same reason the Israeli authorities apologized when it happened: everybody was so naïve and nobody believed this kind of fabrication could happen. There was no reason to doubt the authenticity of the news report because it was coming from what was a respectable TV station.

MT: You too initially believed that the incident was real. When and why did you begin to suspect otherwise, and did you have any idea that exposing this hoax would be such a monumental, lonely uphill battle? What has been the personal cost to you of this eight-year crusade?

PK: Of course, like everybody, I didn’t question the authenticity of the story. Why should I have? I was just a regular citizen watching the news. I didn’t discover the truth. I was educated by the German TV [station] ARD at the beginning, then by [Israeli investigators] Nahum Shahaf and Yosef Doriel’s work that it was a fabrication. Then I made my own investigation and I was forced to admit that their conclusions were right.

I never suspected that it was going to be so monumental. The evidence of a hoax is so obvious that I thought it would have taken me weeks, or months, but certainly not years. And the battle is not over.

I don’t like the word “crusade.” This is a battle for the truth. At the end, I can say that it did not cost me much personally because I have the satisfaction that we made progress and that the truth will be revealed pretty soon.

MT: Why did European Jews, especially prominent intellectuals, not leap to your defense in a chorus of support?

MT: Ten years later, Enderlin’s new book is an award-winning bestseller, but does it make his case any more convincing?

PK: It makes his case worse for him because he puts in writing the lies he has already pronounced for so many years. In his 200-page book, he doesn’t bring a single piece of evidence of his accusations against Israel to substantiate his claims. His only argument is that he has the support of the Israeli army and the Israeli secret services – and this is what has infuriated the IDF [Israeli Defense Force] and the Israeli Prime Minister’s office. And this is why that office issued a very accusatory statement against France 2 and Enderlin.

MT: Rather than fight this blood libel, Israel hoped the controversy would simply fade away, but it continues to be a successful propaganda weapon against Israel. Is that recent letter from the Prime Minister's office, stating that the incident was most likely a hoax, an indication that Israel has decided to break its silence and fight back?

PK: Israel has decided to fight back on this case and we should see something stronger about the case in the near future. I also believe that the information war has become a strategic issue for Israel and that they now understand that they pay a high price for not responding to the lies produced by the western media outlets.

MT: What can we do to support your efforts specifically, and to combat anti-Israeli media bias generally?

PK: Expose the truth. The only antidote to lies is the truth. Please, spread the message as much as you can and the liars will be forced to apologize one day.
(This originally appeared at Pajamas Media, 11/24/10)
at 9:39:00 PM