The Antidote to ‘Toxic’ Masculinity 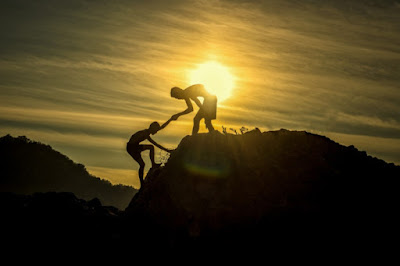 Marine veteran Terry Bagley, a 70-year-old father of five who does housekeeping at a Veterans Affairs hospital, was walking to buy items for Thanksgiving in the Pigtown area of Baltimore, Maryland, on the Tuesday afternoon before the holiday. On his way to the market, a rowhome on the block exploded—likely from a ruptured gas line.

Bagley reportedly wasted no time hurrying to the rescue of anyone who might be trapped inside the burning building. Firefighters later found him in the rubble. Bagley, in critical condition, was placed in a medically-induced coma. His injuries—including a broken pelvis, femur, and hand—will require surgery. (A GoFundMe page set up for the Vietnam vet has raised over $40,000 of a $150,000 goal thus far.) But a 16-year-old girl and 48-year-old woman who were inside the home survived in stable condition.

Amid the usual litany of disheartening news items highlighting the worst of human behavior—mass shootings, wartime atrocities, and acts of random, pointless violence—Terry Bagley’s story is one that shines a spotlight on the best of what we are capable of.

His daughter Eris Bagley later told Baltimore’s 11 News, “He thought nothing about his own life to save two women that he did not know.” Questioned about why her father entered the burning home, she replied, “Because he’s a Marine.”

“My dad endured polio as a child. He also endured the thing with Camp Lejeune with toxic water and he also served in the Vietnam War,” she added. “[He was] heroic, but I wish he didn’t do it because now I’m scared that I am about to lose him. But I’m glad he did it to save people he didn’t know.”

“His heroic behavior is nothing new. … I’ve always seen this, and I think that every child should look up to their father. … Every child should be proud of their father, and I am very proud of what he did, but I am also scared as well, and I’ve got to be honest with that. But I’m praying to my God, and I believe in my God, and I just want my father to get better, and I just want his story to be out there that a 70-year-old man put his life on the line to save two people.”

A 70-year-old man put his life on the line to save two people. Even at his advanced age, which he surely knew would make his own survival unlikely, Bagley did not hesitate to take that risk in an attempt to rescue total strangers in terrible danger. He exhibited the heroic degree of selfless courage that is the hallmark of a cultural virtue that, among younger generations today, has become a dirty word: chivalry.

Chivalry originated in the Middle Ages as a knightly code of valor and virtue. Under the influence of the church, chivalry evolved in moral scope from the timeless warrior virtues of loyalty, generosity, and prowess on the battlefield to emphasize Christian service to the defenseless—a courageous, selfless service to others that still defines for us the word hero.

With its origins in a warrior code, chivalry—distinct from mere politeness and manners—has always been linked to masculinity. Among men and women of older generations, it was just a given that chivalry was an admirable trait for a man. But thanks to the excesses of modern feminism, chivalry today has unfairly earned the scorn and contempt of many young women who view even the most basic chivalrous gesture—say, the gentlemanly opening of a door for them—to be a demeaning, sexist, power play.

Young men, deeply resentful of feminist misandry and ignorant of the history of chivalry, have come to view it wrongly as a self-abasing genuflection to women who don’t appreciate or deserve it. And so, while the concept of chivalry may not be dead, it is an endangered species.

In fact, in our time of a concerted ideological assault on masculinity, when the very nature of men is deemed toxic and oppressively patriarchal, chivalry represents the kind of moral masculinity we need now more than ever. It is the kind of righteous manhood the critics of masculinity never talk about because it exposes their lie that masculinity is inherently poisonous. It is the antidote to so-called toxic masculinity.

The Renaissance philosopher Giovanni Pico della Mirandola declared in his Oration on the Dignity of Man that the free will granted to us by God enables us either to descend to the level of brutes or to aspire to the level of angels. Men are capable of cravenness and evil or of heroism and righteousness. Chivalry inspires and leads us to strive toward the latter. It is an ideal our society desperately needs to recover and celebrate in men, not dismiss as sexist and outdated.

Terry Bagley is an exemplar of that masculine ideal—the kind that compels even a 70-year-old man to put his life on the line to protect and defend others. God willing, he will recover fully. No matter what, though, he is a hero.