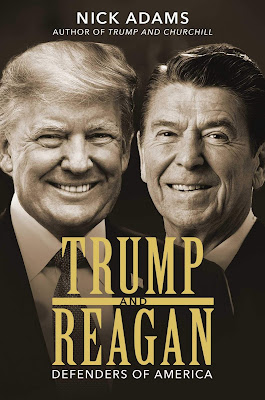 It wasn’t enough for the left to cheat Donald Trump out of a second term in the Oval Office. He still poses such a threat to the Democrat Party that they are mobilized to prevent him from ever being allowed to seek political office again. But it won’t stop there. They want to erase Trump and his legacy from public memory entirely by any means possible: everything from banning him from social media, to denying him a Presidential library, to barring his name from federally funded monuments, street names, and park benches, to such petty measures as cutting his cameo appearance from Home Alone 2. If it were within their power – and it very nearly is – the Democrats would not hesitate to “vaporize” Trump (to use George Orwell’s term) and obliterate every trace of his existence from history. They would make him what Orwell called, in Nineteen Eighty-Four, an unperson.

Conservative commentator, speaker, and writer Nick Adams is determined to thwart this Democrat mission, single-handedly if necessary, and to cement the former President’s place as – in Adams’ view – the greatest in American history. Sometimes referred to as Trump’s favorite author (for having tweeted recommendations of some of his articles and books), Adams published a book last year titled Trump and Churchill, in which he expounded upon a list of ten points of similarity between the two leaders and argued that they were history’s greatest defenders of Western civilization (I reviewed that book for FrontPage Mag here).

In the same vein, Adams’ latest book, fresh off the press (Post Hill Press, to be precise), is Trump and Reagan: Defenders of America, in which he declares Trump to be “the second coming” of Ronald Reagan, only greater – a bold claim, considering the reverence in which conservatives generally hold our 40th President. But Adams argues respectfully, without diminishing Reagan’s achievements at all, that Trump accomplished more in one term than Reagan did in two. In any case, in the course of his new book, Adams illuminates the characteristics, political successes, and even the subversive enemies they faced that make these two Presidents more alike than first glance might suggest.

If you have seen Nick Adams speak in person or in the news media, then you know that this happy warrior and legal immigrant from Australia is arguably America’s most enthusiastic ambassador for the embattled notion of American exceptionalism. The founder of a non-profit organization called FLAG (the Foundation for Liberty and American Greatness), dedicated to educating Americans about the values and principles that make our nation extraordinary, Nick is the author of a number of other books extolling American virtues, including Green Card Warrior: My Quest for Legal Immigration in an Illegals' System, Class Dismissed: Why College Isn’t the Answer, and Retaking America: Crushing Political Correctness.

Adams was an early believer in 2016 candidate Trump, publicly predicting against the polling at the time that the billionaire-developer-turned-reality-TV-star would take the Republican presidential nomination and ultimately the White House itself. “I knew that Trump’s personality and style of leadership were perfect to reverse the Obama years. I knew that he was the new Reagan – with the potential to be even better,” Adams writes in his new book’s preface.

Adams notes that despite some surface dissimilarities – “Reagan was genteel and almost never offended; Trump not so much” – the two former Presidents had a great deal in common: among many other points, they were outsiders who battled against the political establishment; they were charismatic communicators; they both had a background in Hollywood; they both were guided by an optimism and unwavering belief in American exceptionalism; and they both were staunchly pro-life, pro-Second Amendment, and pro-God. Even the criticisms of the two were similar, accused as they were of exploiting white male resentment and being insufficiently intellectual to suit the leftist elites.

Adams repeatedly refers to Reagan and Trump as patriots and “unlikely heroes,” who took over the White House from weak Progressive predecessors (Jimmy Carter and Barack Obama, respectively), vowing to make America great again, and not only led the country into economic booms, but also battled for socially conservative causes. “Neither Reagan nor Trump were expected to be heroes to Christian and social conservatives, for anyone looking at their track record before they became president,” Adams writes. “But both became champions of causes near and dear to” that constituency: Trump’s ban on transgender troops in the military, for instance, and Reagan’s full-throated support for the pro-life movement.

Both men also faced fierce resistance from the “relentlessly anti-conservative” news media, the Deep State establishment, and the D.C. swamp, who didn’t (and still don’t) want the boat of permanent state bureaucracy rocked. Adams devotes a chapter, appropriately titled “The Haters,” to examples of media resentment and false narratives such as the purported Ukraine scandal on which Trump’s impeachment was based, and to how Reagan and Trump pushed back against these threats to our liberty.

A subsequent chapter addresses Trump’s and Reagan’s “Foreign Policy Wins,” such as Reagan’s Soviet Union-busting push for “peace through strength” and Trump’s “America First” decisions such as withdrawing from the Paris Accords and the Iran nuclear deal, and defunding the ineffective World Health Organization – not to mention his unsurpassed support for Israel.

In the short concluding chapter “Greatness,” Adams praises the two Presidents who “inspired new hope in people who had lost hope. They helped culture warriors win important victories” and “shook up the Foggy Bottom foreign policy Establishment.” Reagan and Trump “dedicated years of their lives to defending our most sacred honors and fighting for the American ideal,” and they “did it in the face of manufactured racial unrest and social worries, ginned up by the left-wing fake news media.”

As with his previous book, Adams closes Trump and Reagan with an appendix collecting some of the duo’s most stirring speeches, including their inaugural addresses and Reagan’s 1984 remarks commemorating the 40th anniversary of the D-Day invasion. Adams expresses the hope that readers will look to these speeches for inspiration and pass them on to the next generation.

Fans of both conservative icons can hardly go wrong with Nick Adams’ Trump and Reagan: Defenders of America, a book about two larger-than-life political fighters the left would rather send down the memory hole. That alone is reason enough to own a copy.