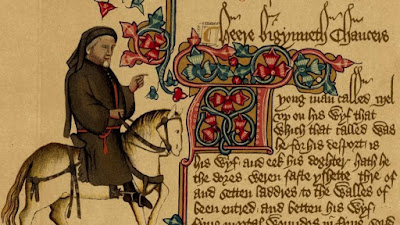 Another week, another Dead White Male toppled off his perch in the classics canon by university administration milquetoasts pandering to the woke, anti-intellectual mob. This time the DWM in question is medieval literary giant Geoffrey Chaucer of The Canterbury Tales fame, courses on whom are being eliminated at the University of Leicester in England because the man often called the Father of English Literature doesn’t match the current “enthusiasms” of students there.

Last month, the University announced its intention to remove courses in The Canterbury Tales and replace them with courses centered on – what else? – sexuality, diversity, race, and ethnicity. “We want to offer courses that match our students’ own interests and enthusiasms, as reflected in their own choices and the feedback we have been hearing,” a university spokesperson explained to MailOnline. Students’ “interests and enthusiasms” apparently now are dominated by an obsession with the power dynamics of skin color and genitalia, and thus Chaucer is no longer relevant.

And not just Chaucer’s works, but anything written prior to the year 1500. Also potentially on the chopping block, reportedly, are courses on: Beowulf, the heroic epic considered to be the earliest work of English literature; John Milton’s magisterial Paradise Lost; the works of poet John Donne and playwright Christopher Marlowe; the chivalric romance Sir Gawain and the Green Knight; and Sir Thomas Malory's Le Morte D'Arthur, the 15th-century chronicle of the legend of King Arthur.

The new “modules” promised to be “excitingly innovative” and would cover “a chronological literary history, a selection of modules on race, ethnicity, sexuality and diversity, a decolonised curriculum, and new employability modules,” the email continued. Sri Lankan-born Vice Chancellor Nishan Canagarajah, reportedly at the center of the diversity push, said it was part of a long-term strategy “to compete on a global level.” And how is such wokeness, which has been in progress for some time now, working out for Leicester University? In just ten years, the school has plunged from 17th on the Guardian University Guide’s ranking of English universities to 77th.

Leicester’s University and College Union (UCU), one of Britain’s largest academic unions, complains that these proposed cuts to English literature not only would infringe upon academic freedom and degrade the learning atmosphere, but cost the jobs of as many as 150 academics. This prompted many academics to lash out in panic and outrage.

In a surprisingly principled response from one academic, Professor Isobel Armstrong, a fellow of the British Academy, returned her honorary doctorate “in protest at the egregious attack on the integrity of English at Leicester and the attempt to eradicate 1,000+ years of language and literature from the curriculum.” Exactly, bravo. A letter from 18 other medieval studies fellows at the British Academy decried the proposed “decolonisation” of the literary canon: “The 14th century, at the boundary of modernity, while still concretely medieval, is one of the most remarkable periods in all of literature… How can anyone seriously claim that an English degree wouldn’t be materially impoverished by excluding so much literature?” the letter asks.

How naïve. Materially impoverishing the Western canon, and ultimately Western civilization itself, is precisely the goal of the people behind this so-called “decolonization.”

Dr. Christine Rauer, a lecturer at the University of St Andrews, suggested that the new could coexist with the old. She told MailOnline optimistically, “It's hard to see why race, ethnicity, sexuality and diversity can't be taught alongside Chaucer and Beowulf.” But they’re not being taught alongside these classic works. They are replacing them. “Bring in the new topics while also keeping the medieval!” Dr. Rauer enthused. Again, the problem is that the new topics subvert the very validity of “keeping the medieval” works, or of keeping any courses honoring unwoke art, literature, or thought.

Chaucer and Beowulf didn’t make the cut, but the university spokesperson assured the Daily Mail that “students at the University of Leicester will continue to study some of the best-loved authors in the English language, from Shakespeare, Austen and Dickens to Keats, Shelley and Byron, to Woolf, Toni Morrison and Colston Whitehead.” But for how long? How long will it be before the woke mob demands the cancellations of those authors too (with the exception of black authors Morrison and Whitehead, neither of whose works have stood the test of time long enough to legitimately be described as classics)?

“There is absolutely no truth to the suggestion that certain modules are being eliminated for being ‘too white,’” the spokesperson denied. No? Let’s be honest: the woke mob doesn’t come for non-white authors unless those authors are unwoke about their victimhood, like America’s remarkable slavery abolitionist Frederick Douglass. The Progressive mob targets white authors because they represent the colonialist oppressors and exploiters of identity groups purportedly “marginalized” in Western culture. Meanwhile, explicitly anti-white “antiracism” programs are metastasizing like a cancer all over America – not just in colleges, but from pre-K classes on.

The purging of icons of the classical can on from educational curricula in the Western world has become so routine that the targeting of Chaucer and other medieval authors should come as no surprise. One of the problems here is that too many institutions of higher learning in the West have abandoned their missions to open the minds of students and expose them to the best of the true, the good, and the beautiful that has come before us; instead, they view their students as consumers whose narcissism must be catered to. Molding a curriculum around student feedback about their “interests and enthusiasms” means the field of Humanities will degenerate to the level of unchallenging offerings like Beyoncé Studies (already happening) and/or intellectual perversions like the “antiracism” ideas being hyped on bestseller lists and talk shows.

But the deeper source of this movement is that Progressive activists throughout Western schools now are hell-bent on dumbing us down, disconnecting us from our history and from the extraordinary intellectual and artistic legacy of our civilization, and molding younger generations into social justice activists instead of educated patriots. Erasing our historical consciousness and cultural roots, as well as our ability to think critically and to reject a mob mentality, is a prerequisite for totalitarian control of the population.

In The Sun Also Rises, one of Hemingway’s characters explains how he went bankrupt: “Gradually, then suddenly.” The same explanation applies to the intellectual bankruptcy of Western education that has been underway for over half a century, and which is now accelerating. Enough of us have to find the righteous courage to draw a line in the sand and say “No more” before it is too late.