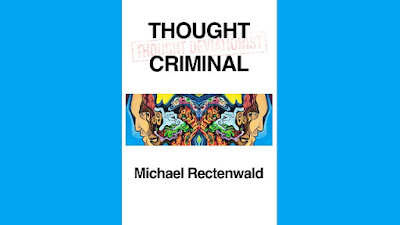 The most compelling science fiction is that in which the core of the story is not the threat of hostile aliens or Death Stars, but the dangers posed by our own humanity. Think of the tales of Philip K. Dick, for example, or those of Theodore Sturgeon, or of course, Nineteen Eighty-Four by George Orwell. Such is the case with the just-released new novel Thought Criminal by author Michael Rectenwald, former New York University professor-turned-champion for academic freedom, and an expert on the intellectual history of the social justice movement.

In January of 2018 I interviewed Rectenwald for FrontPage Mag here about being outed as “the Deplorable Prof,” the man behind an anonymous Twitter account which he used to criticize the social justice ideology of his (at the time) fellow leftist academics. Rectenwald went on to publish a book about the shunning and harassment directed at him by his colleagues and the NYU administration, titled Springtime for Snowflakes: Social Justice and its Postmodern Parentage from New English Review Press, which also published his subsequent books, Google Archipelago: The Digital Gulag and the Simulation of Freedom and Beyond Woke. All are must-reads for understanding the totalitarian ideological currents of today’s Cancel Culture.

Rectenwald’s new novel is set in a near-future dystopia where personal robots keep constant surveillance and report any conversations or actions that reflect dissident thinking; where Smart Cities track your every move; where a massive, centralized database known as Collective Mind “has outmoded traditional higher education and made knowledge acquisition a matter of instant package downloads.” The Collective Mind also threatens to regulate all thinking and obliterate individual identity.

Not simply “a system of control imposed by an independent entity,” Collective Mind is a system that is “only possible when a collective became complicit in its own subjection and when the subjects imposed subjugation upon each other.” Think on this in the context of the current state of America today, in which a disturbing number of the population eagerly complies with useless, authoritarian mask mandates, and angrily shames those who do not comply.

As Thought Criminal opens, Cayce Varin, 48, has lost his prestigious position as professor of the Theory of Mind and AI-Neuroscience at Transhuman University in Santa Cruz, Region of California, over an affair with a graduate assistant. This very human transgression has also earned him a registration as a Thought Deviationist and Vaccine Resistor, and thus he is hauled in by robot law enforcement agents to the Essential Data complex, which houses the most important processors of Collective Mind.

Essential Data is the primary site for treating obstinate cases of “the virus,” a technology which connects the neurotransmitters of the neocortex to Collective Mind in order to facilitate information flows between the two. Varin is told that he needs to have the virus removed so that his thoughts can be “corrected” permanently.

According to the media ministry, or “Mediastry,” the virus had escaped a lab accidentally and deterred connectivity, but Varin has developed a theory that the virus had been released intentionally to infect as many “Human Biologicals” as possible, for the purpose of connecting brains to Collective Mind. He believes the mandatory vaccine is not designed to cure the virus, but to propagate it. “The vaccine ensures that Collective Mind dominates the ‘thinking’ of the Human Biological,” Varin says.

At the risk of being designated a Terrorist and Conspiracist Against Collective Mind, the fugitive Varin undertakes a mission to infiltrate Essential Data and strike a blow for the sake of his individuality, and that of his small network of fellow “deviationists.” The aim is the liberation of personal autonomy, “the latitude of thought necessary for arriving at essential truths.”

Much of the novel echoes our own surreal “new normal,” in which petty tyrants in political office issue draconian lockdown orders and ridiculous, arbitrary social distancing guidelines. For example, Varin notes that “an order from the Governor of the Region of California made sitting or standing on dry beach sand illegal. It was still legal to sit or stand on the wet sand, but of course it was impossible to reach wet sand without first passing through dry sand, so beachgoing was effectively banned.”

The media complex, too, in the novel mirrors our own propagandistic news media: “They always mix a little truth with lies, just enough to retain a shred of credibility… But not too much. It’s necessary that HBs [Human Biologicals] become ardent believers in lies. Adherence to nonsense demonstrates more loyalty than acknowledgements of the truth. Only true believers faithfully affirm nonsense.”

Rectenwald also addresses the impact of identity politics on the “deterioration of knowledge and scholarship” we are already witnessing in our alleged institutions of higher learning:

Knowledge claims became increasingly tied to splintering social identity categories. Tribal warfare, in which sheer social and political power based on moral considerations alone, such as which group had the right to be right, determined what passed for knowledge… A growing obsession with social identity infiltrated every field. Even in the science and technology fields, social identity became the primary criterion for validity… Eventually, the very objects of knowledge were called into question. This marked the end of Human Biological knowledge and the ascendance of the Transhuman.

Investigative journalist Ken Timmerman – author of Election Heist, Dark Forces and other books, and a frequent FrontPage Mag contributor – calls Thought Criminal “the 1984 of the COVID era, where we can step back and view today’s America for what it is: a society infected not by a virus but by collective hysteria.” I won’t give away whether, at the novel’s end, Cayce Varin succeeds in freeing himself from the Collective Mind or, like Nineteen Eighty-Four’s Winston Smith, learns to love it. Suffice it to say that Michael Rectenwald packs a raft of thought-provoking ideas into a tense, short cautionary tale (190 pages) that feels at once disturbingly familiar and nightmarishly surreal.