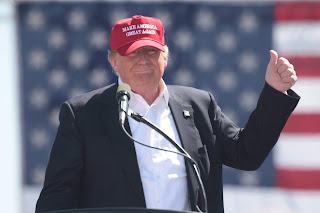 We’re not going to make America great again. It was never that great. We have not reached greatness, we will reach greatness when every American is fully engaged, we will reach greatness when discrimination and stereotyping against women, 51 percent of our population, is gone and every woman’s full potential is realized and unleashed and every woman is making her full contribution.

Cuomo’s office, in damage control mode, later clarified that the governor “believes America is great,” which directly contradicts what he actually said, and that he believes America simply “has not yet reached its maximum potential” of “full equality.” Of course, the sort of equality Cuomo and his fellow socialists mean is not equality before the law or equality of opportunity, but the false equality of results, which they intend to achieve through government enforcement. That is not American greatness; that is totalitarianism.
To undermine the inspirational power of the slogan’s explicit call to greatness, the left has fallen back on its go-to strategy of tarring America First patriots as white supremacists. This week, for instance, corrupt liar Hillary Clinton shared on social media a HuffPo article claiming that “MAGA” has become a symbol of the far right. “The white nationalists certainly believe ‘MAGA’ is a white nationalist slogan,” tweeted globalist Hillary, using “white nationalist” twice in one sentence so that even the thickest of brain-dead Democrats can’t miss the association between MAGA and racism.
In another example, the hat and slogan featured prominently in Jussie Smollett’s recent botched attempt to boost his career (and accelerate a race war in America) with the ludicrous claim that two white rednecks happened to be wandering the streets of sub-zero-temperature Chicago at 2 a.m. with a noose and a bottle of bleach, recognized the little-known black actor exiting a sandwich shop, attacked him, and shouted, “This is MAGA country” before Smollett courageously fought them off with a Subway sandwich. When the two black siblings involved in the hoax purchased items to use in the attack, they reportedly asked specifically for a MAGA hat, but the clothing store didn’t sell the item.
Once upon a time the notion that America was great would have been considered self-evident to all but card-carrying Communists. But the Democrat party has become so radicalized in recent decades that Trump’s slogan and hat have spurred hate-filled radicals around the country to launch profane verbal assaults and physical violence against men, women, and children almost too many times to count. What is it about MAGA that scorches leftists like holy water on demons? What is so triggering about a slogan every American should be able to get behind?
Two things. First, as the examples of Holder and Cuomo above demonstrate, the notion that there was ever a time when America was great enrages and unhinges the left because they have been indoctrinated to despise this country and its history. They reject the concept of American exceptionalism. They no longer see the Founding Fathers as the architects of the freest country in history but merely as sexist slaveowners.
Second, the left assumes that making America great again means turning back the clock to some Edenic rightwing fantasy of 1950s-era segregation and pre-feminism, when women and minorities knew their places and the white patriarchy ruled unchallenged. “It takes us back to what I think, an American past that never in fact really existed, this notion of greatness,” Holder had said. This misconception enables leftists to scorn and marginalize the whole idea as nothing more than bigoted nostalgia.
The truth is that making America great again means turning back the clock to before the advent of Barack Obama, the divisive, anti-colonialist radical who was hell-bent on fundamentally transforming the United States from its leading role as the preeminent superpower into merely another ensemble player on the world stage. It means reviving a patriotic spirit of pride in our nation’s essential goodness, its unequalled generosity, its international leadership in promoting freedom and prosperity. It means reuniting Americans of all colors and creeds in a national vision that embraces rather than denies our exceptional role in history – and that is why “Make America Great Again” is the quintessential political slogan for our time.
From FrontPage Mag, 4/10/19
at 7:41:00 PM