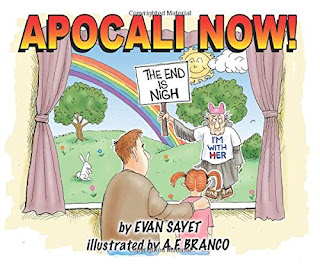 Never mind Islamic terrorism, illegals flooding our border, the rise of MS-13, and the opioid crisis – all the Democrat presidential candidates agree that “climate change” is the most imminent, terrifying threat facing America and the world. As their Party’s rising star Alexandria Ocasio-Cortez put it recently, the world will end in twelve years if we don't address it.
Well, Evan Sayet has addressed it in a new book and his conclusion is that the Chicken Littles of the left have been whipping up one environmental hysteria after another for over 50 years (none of the dire predictions of which has ever come to pass) and they're at it again. The openly-conservative comedian and philosopher Sayet is perhaps best-known as the author of the enlightening and entertaining must-read titled The KinderGarden of Eden: How the Modern Liberal Thinks, expanded from a must-watch 2007 Heritage Foundation speech that has garnered over 770,000 views on YouTube as of this writing.
Sayet’s newest work is Apocali Now!, a faux children’s book illustrated by nationally syndicated editorial cartoonist A.F. Branco. The book humorously skewers the left’s perpetual fear-mongering about environmental apocalypses, but also manages to touch on their science denial, hypocrisy, totalitarianism – even the mainstream media’s “fake news.”
I asked my friend Evan some questions about the book and more.
Mark Tapson:    Let’s begin with your choice of medium. Why did you decide to take on the left’s “sky is falling” frenzies in a cartoon format?
Evan Sayet:     It was quite by accident. I was writing my next book, tentatively titled Countering Culture: The Left’s War Against All That Is Human, and I began to address all of the fake environmental disasters the Leftist media and others have employed through the years that not only failed to be the catastrophe that they, with their “authority,” swore they would be, but, in fact, barely materialized at all, and suddenly I found it all so ludicrous I was singing it to myself.
MT:        How did you hook up with A.F. Branco as your illustrator?
ES:         Well “hook up” has a whole different meaning these days so I want to make it clear that I have never hooked up with Tony. But, obviously, if this was going to look like a children’s book, I needed an illustrator and, if one needs an illustrator, one of the very first phone calls one makes is to A.F. Branco.
The fact that he instantly signed on meant two things to me. One, that I’d have someone who would make all of my pointed jokes only that much stronger and, two, given how in-demand he is, the fact that he committed to this project without hesitation made it undeniable to me that I wasn’t alone in seeing how important a project Apocali Now! is.
MT:        Can you elaborate on one of the lines in the book, on what it says about the nature of the left: “it’s not about science / They just want control and they need your compliance”?

ES:        Rahm Emanuel famously stated that there’s “opportunity found in crisis.” Those looking for opportunity, then – the opportunity to get rich, the opportunity to get famous, the opportunity to get powerful – have a vested interested in manufacturing crises. In “honor” of Earth Day, for example, CBS News reran a clip of their reportage from the first Earth Day 49 years ago, and in the severest of voices, the “most trusted man in America” summed up the story as, “Act now or DIE!!!”
This "act or die" meme that the well-known Leftist Walter Cronkite was selling all those years ago remains – and has been all along – the angle the Democrats play. People who are about to die become hysterical and hysteria blinds people to what is rational. Since the Left is always selling something that is not merely irrational but impossible – a government-created utopia – they need the same kind of "Act now!" Hurry! Time's running out!" sales pitch that used car salesmen employ to pressure people into making bad decisions and buying their product.
The only way the Left could possibly get people to forfeit somewhere between seventy and ninety percent of their income and turn their freedom over to a 29-year-old bartender from the Bronx pitching high speed rail to Europe – or to beat down the doors of the Supreme Court, or march down the street dressed up as giant vaginas – is if they have taken leave of their senses. Hysteria -- like the Left -- is the opposite of reason.
MT:        Tell us about your own political history. Have you always been a conservative, or was there a Saul-of-Tarsus conversion in your past?
ES:         Like a good many of us who now self-identify as “conservatives,” I thought myself a Liberal and thus a Democrat when I was a child. In those days, life in America was so halcyon that one didn’t have to think very deeply.  And when one doesn’t think very deeply, one believes themselves to be a Democrat.
The truth is, I always was – and remain – a liberal. The problem is that the Liberal movement (upper case “L”) is not liberal in the slightest. It is the antithesis of liberalism. In fact, true liberalism resides in the Republican party and the conservative movement. After all, what we conservatives seek to “conserve” is this liberal democracy. My “come to Jesus” moment wasn’t that I didn’t believe what I believed; it was when I recognized that what I believed was not found on the Left.
MT:        The left has long realized that comedy is a potent political weapon, but this is a lesson the right is slow to learn. There seem to be precious few openly-conservative comedians, even though you’ve proven the left is ripe for skewering. What can our side do to get our act together on this front?
ES:         Our problem is neither a lack of humor nor a lack of conservative comedic talent. Our problem is two-fold. First, because they are the keepers of the gates – they are the ones who say whether you have a show on HBO or you don’t; they’re the ones who say you get a late night television show (or even an appearance on one) or you don’t – none of the mainstream opportunities available to a Leftist of even moderate talent or wit is available to those who refuse to toe the line.
There is an answer to this, however, which is to start our own media outlets and yet, though some like my friend Tom Julian [Founder of The JUL-TV Television Network and The Praise & Freedom Network] try, we still don’t have the great benefactors – either the studios or the George Soroses (please don’t put a “sic” there, who the hell knows the correct plural of Soros?”) – who will step up and give us both the creative freedom and the wide distribution that the others receive.
I suspect this is because our side tends to be objectively driven (and there is no less objective a profession than show business) and because “culture” (writ large) is not how people who care first about home and family, community and church, neighbors and friends tend to think.
MT:        What’s next for you? And where can people see you perform next?
ES:         Dinner. Oh, wait, you meant beyond that. I’m not sure. One of the things in my life that is a double-edged sword is that I work in so many different types of media – I write serious books, apparently, I write kids’ books, I write speeches for presidential candidates and have written speeches for this president. I give serious lectures and comedic talks and still write screenplays and documentaries. So, right now, I’m promoting Apocali Now! because I believe in it. Believe me, this is NOT a “prestige project.” But I do believe it’s an important one.
We can have as many think tanks as we want. We can produce the most brilliant and truthful policy papers ever written and we do. But when the “new face” of the Democratic party, Alexandria Ocasio-Cortez, states point-blank that “it’s more important to be morally right than it is to be factually right” we’ve got to recognize that we need to come at them from a different angle. I think Apocali Now! does just that.
One more thing, please. I have heard from a number of people that what they’re doing is buying SEVERAL copies of the book. They keep one on their coffee table for when friends come to visit, and they’re quietly leaving the others behind at doctors’ offices, in the seatbacks of airliners, at coffee shops and other places where it might be found and read by someone who might then be moved by the never-ending litany of ecological disasters that simply never came to be.
MT:     Great recommendations for disseminating the message. Thanks for putting it out there, Evan – just in time too, since humanity has only twelve years left.
From FrontPage Mag, 4/25/19
at 10:08:00 PM