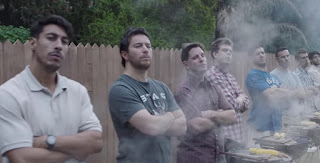 
Encouraging men to aspire to their best character is actually an admirable message. Men should strive to be the best husbands, fathers, sons, the best men they can be. Bullying and sexual harassment (neither of which is exclusive to men, by the way) are unacceptable. But consider the context in which this ad appeared: the aforementioned APA report labeling traditional masculinity harmful; the ongoing demonization of men via the out-of-control #MeToo movement; the relentless messaging that masculinity is an outmoded cliché, something that must be discarded for us to evolve; and behind all this, literally decades of vicious browbeating from feminists whose goal is not equality but the eradication of masculinity. Then along comes this virtue-signaling Gillette ad stating that only “some” men are decent and the rest are pigs.

For many, that may have been the last straw. Social media swarmed with men (and supportive women) swearing off Gillette products. Op-eds defending masculinity, and denouncing the ad as ill-advised at best, abounded.
A PR expert quoted at The Guardian (a publication which devotes a significant amount of space to bashing norms of masculinity) praised the ad and said, “It is no longer enough for brands to simply sell a product. Customers are demanding that they have a purpose – that they stand for something. Masculinity is a huge part of Gillette’s brand, and there is a recognition in this ad that the new generation is reworking that concept of masculinity, and it is no longer the cliché it once was.”
Some have put forth the argument that Gillette, whose tagline used to be “The Best a Man Can Get,” was making not a political statement but simply a calculated marketing move for publicity, much like Nike did last year by making the cop-hating Communist Colin Kaepernick the face of a highly controversial “Just Do It” campaign. That argument falls apart in light of the fact that the creator of the Gillette video is “philosophically unpleasant” feminist Kim Gehrig, of the UK-based production agency Somesuch. Gehrig was behind an ad campaign for Sport England called “This Girl Can” and “Viva La Vulva,” an ad for a Swedish feminine hygiene brand “which boldly challenged the stigmas around women’s periods,” according to AdWeek. The ragingly misandrist Jezebel website reported that Gehrig sent an email to CNBC which read, “At the end of the day, sparking conversation is what matters. This gets people to pay attention to the topic and encourages them to consider taking action to make a difference.”
So presumably the motive for the Gillette ad was more activism than profit, although of course the company hoped to score the same net boost in customers that Nike’s Kaepernick ad did. As The Intelligencer points out, however, the difference between that ad and Gillette’s is that the former “is uplifting rather than accusatory.” By contrast, the Gillette ad is a “downer.” (For a more uplifting, sympathetic take on masculinity, check out this video response to the Gillette ad from Egard Watches.)
Of course, the Left embraced the ad (imagine their apoplectic outrage if an ad campaign dared to address “toxic femininity”). One male Twitter user remarked that “if your masculinity is THAT threatened by an ad that says we should be nicer then you're doing masculinity wrong.” This is way off the mark. Men weren’t threatened by the ad; they were insulted by it. It sparked widespread anger because men are fed up with being demonized. They are fed up with having masculinity equated with bullying and sexual harassment. They are fed up with being told that their very nature is poisonous and that redefining masculinity means acting like stereotypical women. Countless good men who are quietly leading lives as protectors and providers and role models and unacknowledged heroes are fed up with the cultural insistence that masculinity is a dire problem instead of a dynamic life force.
The pushback against the Gillette ad and the APA report are evidence that the Marxist assault on Western masculinity is finally beginning to be met with resistance. Men and the women who love traditional masculinity (i.e., the majority of them) are getting mad as hell and they’re not going to take it anymore.
From FrontPage Mag, 1/19/19
at 2:16:00 PM