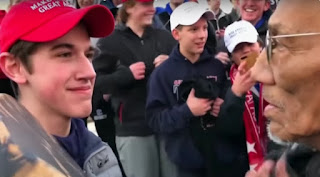 In case anyone still needs confirmation, the rage and frenzy surrounding the supposed standoff caught on video last week between Covington Catholic High School students and an anti-Catholic, Native American activist demonstrates as nothing else has lately that the political left’s primary aim, the end game of identity politics, is the demonization of white Christian men.
Covington student Nicholas Sandmann (pictured above) was the unfortunate epicenter of this tempest-in-a-teapot concocted entirely by the activist media, in which he and his classmates were falsely portrayed as racist bullies surrounding and taunting a frail Native American “elder,” Nathan Phillips. The truth – that it was the schoolboys who were verbally assaulted by Black Hebrew Israelite activists, and that Sandmann did and said nothing but stand his ground and smile in the face of Phillips’ provocation – swiftly came to light, but not before the entire country had squared off over the lie.
It wasn’t that the news media got the story wrong, which would imply that they made a mistake, but that they didn’t care about getting it right. They didn’t care, because they saw an opportunity to dehumanize a white male wearing that triggering symbol of white supremacy, the “Make America Great Again” cap, and decided to run with a narrative that could be weaponized against President Trump and his “angry white male” supporters. “Pick the target, freeze it, personalize it, and polarize it,” master strategist Saul Alinsky once taught, and Catholic white boy Sandmann became the left’s target of the moment.
Some media outlets gradually and quietly backed off from their original rush to judgment as more video and context emerged, but the damage was done, the political divide between Americans was widened, and the more fervent leftists clung to their bigoted view that Sandmann represents the toxic, Christian white male underbelly of an America that bears racism in its very DNA, as Barack Obama once declared.
The media hurricane was reminiscent of the crazed spectacle of last October’s confirmation hearings for Supreme Court Justice Brett Kavanaugh, a devout Catholic who was viewed as the poster boy for the left’s favorite bogeyman, “white privilege.” Based on a single, decades-old, evidence-free allegation, the Alinsky-trained left smeared Kavanaugh as a drunken sexual predator (and even pedophile) whose addition to the Court would hurl women into a misogynistic dystopia straight out of The Handmaid’s Tale.

Sandmann is the left’s new Kavanaugh. On Twitter, BuzzFeed senior culture correspondent Anne Helen Petersen made that connection explicit by pairing Sandmann’s photo with one of Justice Kavanaugh’s smiling face and called their expressions “the look of white patriarchy.” Ebony Elizabeth Thomas, a University of Pennsylvania associate professor in education, tweeted that Sandmann represents “the smiling face of whiteness.” So “Smiling While White” is now essentially a hate crime. In fact, Smiling While White is not even considered a smile; it’s a “smirk,” and smirking is now seen as something only whites do. Has no one ever seen Barack Obama’s face?
Last month Democrat Senators Kamala Harris and Mazie Hirono grilled Trump judicial nominee Brian Buescher over his membership in the Catholic fraternal organization, the Knights of Columbus. Both hard-left Senators referred to the KoC’s “extreme positions” and Harris complained that it was an “all-male” institution – because any Christian-based institution that is all-male must be a hotbed of rapey patriarchs. Last week, Dan Levin, a reporter from the New York Times, went on Twitter with the hashtag “ExposeChristianSchools” digging for dirt on Christian educators. The day after his confrontation with Covington Catholic students, Nathan Phillips and his drum-and-chant ensemble, who demand reparations from the Catholic Church for indigenous peoples, tried to disrupt a Mass at the Basilica of the National Shrine of the Immaculate Conception in Washington D.C.
What all this comes down to is identity politics, the Marxist-inspired ideology of divide-and-conquer. It shrewdly posits that the dynamics of Western society can be reduced simply to the conflict between oppressor and oppressed, and thus the most effective way to resist and ultimately overcome the oppressor is to define and categorize people not by their individual character but collectively by the immutabilities of race and sex. In America as well as elsewhere in the Western world, the oppressor is seen as the Christian white male, and all other identities belong to one or more categories of the oppressed. The end game is not unity of the body politic, not e pluribus unum, but the overthrow of the oppressor.
In this worldview, if you are, say, black, then you are defined as an oppressed class regardless of what you think and believe, regardless of your economic stratum, regardless of your life experience. If you are a black who resents being lumped in with other blacks simply because of your skin color, and you resist the expectation to consider yourself a victim of white supremacy, then in the view of identity politics you aren’t really black. You are ostracized as a race traitor. Likewise for members of other designated victim groups.
But for all the left’s obsession with victims, the demographic facing far-and-away the most open bigotry today is the oppressor class, white Christian men. Nowhere is this more evident than in the indoctrination mills of our universities, where entire Women’s Studies and Ethnic Studies departments extol the righteous victimhood of the oppressed classes, alongside proliferating programs on “deconstructing whiteness” and “toxic masculinity.” In response to the Covington controversy, Kevin Allred, a white educator who teaches a course in “Politicizing Beyoncé,” tweeted that “white people really are terrorists. whiteness is terrorism.” Substitute "blackness," "Jewishness," or "Muslims" for "white people" in that tweet and there would be a flood of hate speech accusations and a Twitter ban. But because the left has made it culturally acceptable to spew hatred at whites, Allred will face no consequences. Whites who object to this are dismissed by the left as whining snowflakes who, as the oppressor class, deserve all the hatred aimed at them – proving the point that blatant anti-white bigotry is acceptable.
None of this is new. Western civilization and the Christian white males with whom it is identified have been targeted increasingly for decades in the name of diversity and multiculturalism (recall Rev. Jesse Jackson in the 1980s leading Stanford protesters in the chant, “Hey ho, hey ho, Western Civ has got to go”?). As far back as twenty years ago, David Horowitz published a collection of essays called Hating Whitey about this dangerous phenomenon and its “growth industry” of anti-white activists and academics. Getting from hating whitey to literally exterminating whitey may be a bridge too far, but dismantling the purported white power structure by dehumanizing white males, inculcating a deep sense of guilt and self-hatred in them, and squeezing them out of positions of authority and influence is manageable and already underway.
Especially with the onset of Trump Derangement Syndrome, the left has ramped up this offensive against the Christian white male “oppressors” such as 16-year-old Nicholas Sandmann who stand in the way of their “inclusive” Marxist utopia. And like Sandmann, we must stand our ground.
From FrontPage Mag, 1/27/19
at 2:17:00 PM