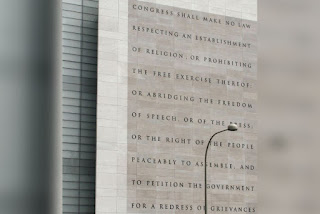 The Land of the Free is facing a crisis of freedom. A new study from the University of California at Los Angeles polled 1,500 students at four-year universities about their views on free speech. The results are disheartening, to say the least.
Forty-four percent of the student respondents believe that the First Amendment does not protect “hate speech.” Sixteen percent answered “don't know,” and only 39 percent answered correctly. Disturbingly, not even conservative students seemed to understand First Amendment protections: only 44 percent said that hate speech is protected, compared to 39 percent of Democrats and 40 percent of Independents.
A stunning 51 percent of students thought that “shouting so that the audience cannot hear” was a valid tactic for opposing a controversial speaker. Violence as a means of shutting down a speaker was acceptable to 19 percent, or one out of five, of respondents.
“The majority of students appear to prefer an environment in which their institution is expected to create an environment that shelters them from offensive views,” the study concludes.
This is concerning for many reasons, but the most urgent one is that our culture has reached the point of hysteria about an imaginary tide of neo-Nazis threatening to turn America into the Fourth Reich. White supremacists – a discredited fringe of politically impotent, openly despised losers – suddenly loom large in our collective consciousness thanks to a relentless propaganda campaign, aided and abetted by the left-leaning press, to demonize President Donald Trump and right-wingers in general as literal Nazis.
On Twitter I was called a Nazi supporter by a total stranger for making the simple assertion that everyone has a First Amendment right to speak (I wasn’t even referring to Nazis). Another told me that hecklers have a right to be heard but speakers don’t, and that people on opposing sides of an issue must share a “mutual humanity as a precondition to listening to one another.” In other words, only those who hold approved ideas earn the right to be heard; those who don’t are cast out of decent society.

Elsewhere on Twitter (because this is just the sort of intellectual sewer Twitter is) there was a lengthy discussion thread initiated by a professor who declared that pre-emptive violence against suspected “Nazis” may not be legal but it is moral.
This is what things have come to: certain ideas – usually politically incorrect ones – are dismissed as “hate,” defending freedom of speech for all marks one as a Nazi, and ski-masked thugs who mob and beat innocent bystanders and journalists at a Trump rally are considered “anti-fascists.”
A totalitarianism has crept into the culture since the 1960s, resulting in the insidious concept of “hate speech” – the idea that speech which is hurtful or offensive is not a legitimate form of expression and is not covered under the First Amendment. “Free speech doesn’t mean you have the right to spread hate,” is the prevailing but incorrect sentiment among many young people now.
And who determines what constitutes “hate”? Not surprisingly, those who are quick to denounce someone for hate speech are usually those pushing an agenda. Why, to cite one example, does atheist Richard Dawkins’ criticism of Christianity raise no eyebrows, but his criticism of Islam got him disinvited from a radio talk show for his “hurtful speech”?
We shouldn’t need reminding of this, but apparently many college students do: there is no First Amendment exception for “hate speech.” But once you are convinced by peers and professors and pop stars that there is and that it is morally unacceptable, then the logical next step is to believe that it is a moral imperative to prevent “hatemongers” from speaking by any means necessary, including violence. Since the purveyor of “hate speech” is committing a sort of violence against self-perceived victims, then the “victims” are justified in committing violence as “self-defense.”
If we are going to survive this crisis of free speech and defuse the hysteria, we must simultaneously undertake three steps. One, we must do a better job of educating our youth and inspiring them about American civics, American exceptionalism, and American history (as opposed to spreading the subversive propaganda of self-proclaimed “radical historian” Howard Zinn, whose ubiquitous A People’s History of the United States has warped whole generations into believing our history to be one of genocide, racism, and imperialist exploitation).
Two, we must discredit the vague notion of “hate speech” and push back against those who weaponize it against their political targets, such as the biased Southern Poverty Law Center, which has established itself as the arbiter of “hate groups” nationwide.
And three, we must adopt zero tolerance for the violence from anti-free speech elements such as the “Antifa” anarchists. Labeling Antifa a domestic terrorist group is a step in the right direction. Strictly enforcing law and order at events featuring controversial speakers is another essential step.
This is not to say, of course, that we as a society cannot condemn bad ideas or denounce racism, bigotry, and other repugnant forces. But all must be free to express their ideas and opinions in the public square, where those ideas will stand or fall on their own. None of us is free unless all of us are.
From Acculturated, 9/21/17
at 11:00:00 PM