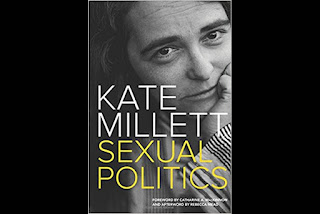 Feminist icon Kate Millett passed away recently in Paris at the age of 82. Obituary portraits and reminiscences of the author of Sexual Politics and other books ranged from respectful to reverential to “tongue-tied fangirldom.” But what has the legacy of her brand of feminism truly been?
Sexual Politics, Millett’s first book, traced the insidious ways she claimed that the “patriarchy” was institutionalized throughout the culture and kept women repressed, often unconsciously so. The “fundamental instrument” of patriarchy, she declared, was the family unit, which encouraged women to embrace their own conformity to the system. Real liberation was only possible by casting off the chains of a woman’s traditional role of wife and mother. Critic Irving Howe observed that the book displayed such little interest in children that it was as if it had been written by a female impersonator.
Called “the Bible of Women’s Liberation” by the New York Times, the 1970 book had a seismic effect on feminist thought and launched her as what the Times called “a defining architect of second-wave feminism.” In a cover story that same year, TIME magazine crowned her “the Mao Tse-tung of Women’s Liberation.” Fellow feminist Andrea Dworkin said that Millett woke up a sleeping world.
I am friends with Kate’s sister Mallory, whose perspective on her sibling gives some necessary insight into the true nature of the feminist vision. In a riveting article from a few years back bluntly titled, “Marxist Feminism’s Ruined Lives,” she shared what she saw of the subversive undercurrent of her sister’s passionate radicalism.
Mallory describes her first experience participating with Kate and friends in a women’s “consciousness-raising-group” in 1969. The meeting opened with an almost liturgical back-and-forth recitation that left Mallory dumbstruck:

“Why are we here today?” asked the chairperson.
“To make revolution,” they answered.
“What kind of revolution?” she replied.
“The Cultural Revolution,” they chanted.
“And how do we make Cultural Revolution?” she demanded.
“By destroying the American family!” they answered.
“How do we destroy the family?” she came back.
“By destroying the American Patriarch,” they cried exuberantly.
“And how do we destroy the American Patriarch?” she replied.
“By taking away his power!”
“How do we do that?”
“By destroying monogamy!” they shouted.
“How can we destroy monogamy?”
“By promoting promiscuity, eroticism, prostitution and homosexuality!” they resounded.
“It was clear,” wrote Mallory, that “they desired nothing less than the utter deconstruction of Western society.” To accomplish this it was necessary “to invade every American institution. Every one must be permeated with ‘The Revolution’: The media, the educational system, universities, high schools, K-12, school boards, etc.; then, the judiciary, the legislatures, the executive branches and even the library system.”
Mallory was shocked and became sick of the “unbridled hate” for American society she witnessed at subsequent meetings, but ultimately dismissed it all as “academic-lounge air-castle-building.” She moved on with her life while her sister became famous and influential promoting “Marxism 101 for women” – a revolution against the oppression of the nuclear family. “Her books captivated the academic classes and soon ‘Women’s Studies’ courses were installed in colleges in a steady wave across the nation with Kate Millett books as required reading,” wrote Mallory. The rest is history – or as radical feminists prefer, herstory.
Mallory has heard from numerous people that her sister’s books have destroyed families and lives:
I’ve known women who fell for this creed in their youth who now, in their fifties and sixties, cry themselves to sleep decades of countless nights grieving for the children they’ll never have and the ones they coldly murdered because they were protecting the empty loveless futures they now live with no way of going back. “Where are my children? Where are my grandchildren?” they cry to me.
Yes, this is only anecdotal, but can one honestly look at the broader effect of radical feminism on our culture and not see the destruction it has wrought and/or contributed to: the dissolution of the nuclear family, a culture awash in rampant promiscuity and gender confusion, a virtual genocide of the unborn – just as Kate Millett and her cohorts dreamed of 50 years ago.
Just to be clear: criticizing feminism is not a rejection of equal rights, and reasonable people today recognize this, which is why a recent poll revealed that 85 percent of Americans believe in equal rights for women, but only 18 percent consider themselves feminists. That’s because most people understand that for decades now, feminism has been the domain of a Marxist, academic fringe. There was once a time when first-wave feminists struggled to secure the right to vote, equal rights before the law, and equal pay for equal work – which virtually everyone now supports, and rightly so. But subsequent “waves” of feminism have been not about empowering women but about dismantling capitalist society.
Women are not empowered or made happier by being indoctrinated to equate traditional masculinity with “rape culture,” to indulge in promiscuity, to reject motherhood, or to cling to a victim narrative. Conservative women have always recognized this, and as the aforementioned poll suggests, even liberal young women are increasingly rejecting the label “feminist.”
The cost to our culture of Kate Millett’s legacy, as the “defining architect” of so much destruction, has been high, but the restoration is underway.
From Acculturated, 9/18/17
at 10:57:00 PM