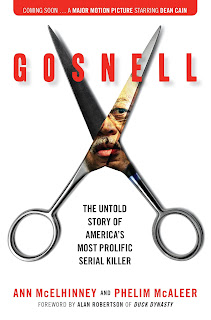 Masked by innocuous language like “pro-choice” and “reproductive care,” and protected by a media conspiracy of silence, the grim reality of abortion rarely surfaces in our cultural awareness, as it did with the recent undercover videos exposing Planned Parenthood’s moral vacuum. But a new book about the chilling crimes of Dr. Kermit Gosnell, America’s most prolific serial killer, highlights that ugly reality in an even more horrifying but compelling fashion.
Part true-crime investigation, part social commentary, part courtroom drama, and part journey into the banality of evil, Gosnell: The Untold Story of America’s Most Prolific Serial Killer was written by investigative journalists and filmmakers Ann McElhinney and Phelim McAleer, well-known for their controversial documentaries FrackNation and Not Evil Just Wrong, as well as a play called Ferguson drawn entirely from testimony about the shooting of Michael Brown by officer Darren Wilson. The husband-and-wife team have also miraculously crowdfunded a feature film based on the Gosnell story (it raised more money than any film project in Indiegogo history), directed by conservative actor and Twitter gadfly Nick Searcy (Justified), with the screenplay written by novelist and political commentator Andrew Klavan.
McElhinney begins the book with a confession that she had “never trusted or liked pro-life activists”; she resented the “emotional manipulation” of their demonstrations – until she began researching the Gosnell story, a process so “brutal” that at times she wept and prayed at her computer, not only over Gosnell’s evil but over “the reality of abortion” even when it’s performed properly and legally. Writing the book changed her dramatically, and it’s not an overstatement to say that reading this book will have the same effect on many readers as well.
Dr. Kermit Gosnell might still be butchering babies today if it weren’t for the dedication of a Philadelphia narcotics investigator named Jim Wood who followed up a lead about Gosnell’s lucrative illegal prescription scheme. The lead led to a raid on Gosnell’s Women’s Medical Society abortion clinic in February, 2010, where investigators discovered shockingly unsanitary conditions and incompetent, untrained assistants, as well as improperly medicated post-abortion patients sleeping or sitting together under bloodstained blankets, a few in need of hospitalization. The procedure room was even filthier. Fetal remains were found throughout, in empty water and milk jugs, cat food containers, and orange juice bottles with the necks cut off. One cupboard held five jars containing baby feet, which Gosnell apparently severed and kept for his own amusement.
Unfazed by the presence of the FBI, Dr. Gosnell proceeded to perform an abortion in the middle of the raid. When he was done, Gosnell sat down with the investigators and ate dinner while still wearing torn, bloody surgical gloves (his staff later reported that Gosnell normally ate during his abortions). He pointed out one of the cats that roamed the clinic, which reeked of cat urine, and casually said it had killed 200 mice there. The only time his cool, casual demeanor slipped was when he realized that the staff were telling detectives about his habit of manipulating ultrasound readings to falsify fetal ages, in order to perform late-term abortions well after the state’s legal limit. Detectives also would later learn that Gosnell’s practices included killing babies that were born alive by plunging scissors into the backs of their necks and snipping the spinal cords.

A grand jury was convened, and its final report chronicled how America’s biggest serial killer got away with murder for more than thirty years. The grand jury pointed the finger of culpability not only at Gosnell and his wife who assisted him, but at his staff and officials in numerous state government agencies all the way up to the governor. “The report is a scathing rebuke,” McElhinney writes, “of the scores of bureaucratic automatons and pathetic paper pushers who failed to do their jobs.”
Despite a long history of complaints and even suspicious deaths, official incompetence and neglect from the Pennsylvania Department of Health, Department of State, Department of Public Health, State Board of Medicine, and more official entities meant that Gosnell never suffered any consequences for decades of criminal malpractice – while the victims kept piling up.
“[T]he Planned Parenthood people and the [pro-choice] community would tell you that everybody knew about him,” said Assistant D.A. Christine Wechsler. But when “he got arrested, and we were investigating, no one wanted to unearth it. It was very taboo.” It was taboo because, as the authors write, “[m]edical professionals didn’t want to contribute to any official proceeding that might shine a negative light on abortion… It seems the medical establishment cared more about the principle of unfettered access to abortion than the safety of real-life women.” Even the grand jury judge worried that the report would become fodder for anti-abortion activists.
In the end, Gosnell faced 258 charges including seven counts of first-degree murder for babies whose spines he snipped; third-degree murder in the death of a patient who died post-abortion; conspiracy to commit murder in “hundreds of unidentifiable instances” of killing babies born alive; two counts of infanticide for failure to resuscitate born-alive infants that could have survived, and much more. But for the statute of limitations on infanticide, and Gosnell’s thorough destruction of evidence (not to mention the state officials who didn’t want his crimes to spike Philadelphia’s crime statistics), he could have been charged with hundreds or perhaps even thousands of murder charges. Even so, as he was arrested and handcuffed, the smirking, confident Gosnell merely said, “So this is what happens when you try to help people.”
The authors also examine the motley crew of Gosnell’s incompetent staff, all of whom he selected for their “appalling dysfunction”: addiction, depression, mental illness, childhood abuse, and neglect. They were willing accomplices who carried out Gosnell’s orders without calling him out for his illegal procedures and horrific proclivities.
Despite all the disturbing evidence mustered against him, Gosnell’s trial was no slam dunk. First of all, the jury was very pro-abortion. Second, Gosnell’s masterful defense attorney Jack McMahon ingeniously exploited the hazy line between what Gosnell did and what constitutes normal abortion procedure, which is barbaric enough even when legal. He also planted the seed of doubt about the exact cause of death of the babies his client aborted, and raised the specter of racism over the prosecution’s targeting of a black doctor working in an inner-city clinic.
Nevertheless, Gosnell ultimately was found guilty of capital murder charges, but fearing that a lengthy appeal might mean he wouldn’t live to see his own execution, prosecutors offered him a life sentence if he waived the right to appeal. McMahon convinced his reluctant, egomaniacal client to agree. Gosnell was later hit with an additional thirty-year sentence for the drug dealing part of his practice.
The book closes on a chilling face-to-face prison interview with the creepy Kermit Gosnell conducted by Ann McElhinney. It makes for a riveting coda to an already gripping read.
In addition to the silence of the largely indifferent medical professionals who didn’t want to demonize abortion, the abortion-sympathetic news media also attempted to ignore this shocking story. But new media journalists and thousands of social media users joined forces to bring Gosnell and his charnel house of horrors into the light of day, and finally Kirsten Powers helped give it mainstream attention.
Even so, Gosnell’s bottomless evil is not as well-known as that of more infamous serial killers with household names and far fewer victims to their credit. That is one reason why Ann McElhinney and Phelim McAleer’s book Gosnell: The Untold Story of America’s Most Prolific Serial Killer and their feature film deserve as wide a readership and audience as possible.
From FrontPage Mag, 1/31/17
at 9:08:00 PM