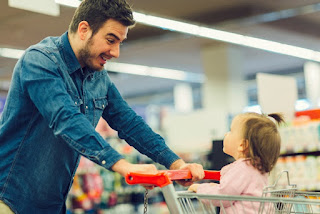 “I’m a dad, I love being a dad,” says one father in a short video by Care.com, “and dads are parents too.” The video features fathers talking about their experiences being treated as extraordinary for ordinary parenting, such as taking their kids for a walk.

The Huffington Post recently featured a brief profile of Don Hudson, stay-at-home dad of four, who in 2015 opened a “father-focused” store in Portland, Oregon called Seahorses. (Male seahorses actually undergo pregnancy, give birth to their young, and shelter them in the father's pouch during the earliest stages of development.)


Hudson was inspired to open the store after feeling insulted by the constant suggestion that, as a father, he’s merely a glorified babysitter. “It’s an insult,” he says. “We’re not babysitting. We’re parenting. They’re our kids.”


Hudson “wants to give dads a voice that accurately reflects fatherhood… We’ve successfully conveyed the message that dads are competent parents. We’re not a bunch of bumbling idiots like the media portrays,” he said. “If you leave the kid alone with dad, he’s not going to be home stuck to the wall. Not everyone puts sharpie marker on their kids’ eyebrows just to get a good picture out of it. We’re in the trenches, too.”


Yes, fathers are parents too, but they’re not mothers. It’s not necessary to go to the “gender-equal” lengths of Sweden’s “latte pappas” who are striving to erase any natural difference between mother and father. A journalist living in Malmo who authored an article about research into the hormonal effect of parenting claims that close daily involvement with his children has actually altered his hormones to such an extent that on occasion his nipples “tingle strongly as if preparing to lactate.”


He and other latte pappas speak in high-pitched “motherese” to their kids, and he points proudly to a finding that testosterone drops markedly in more involved fathers. In fact, that seems to be the point: the owners of a drop-in center for new parents in Malmo are “convinced that giving all fathers a six-month dose of hands-on parenting would vanquish forever the brash, aggressive, insensitive man. ‘If you are closely connected to a child,’ [one owner] says, ‘you can’t be tough and hard.’” These Swedes seem eager not only to make fathers equal parenting partners but to emasculate them until they are phsyically indistinguishable from mothers.


That would be unfortunate for the children involved. The article notes that an anthropologist at the University of Nevada, Las Vegas, says that if Sweden achieved gender-equal parenting, it would be the first society in human history to do so. There’s a reason for that: biologically and culturally (regardless of the culture), fathers and mothers generally have different and complimentary roles to play in the raising of children. Those children and society are best served when both parents fulfill those roles responsibly.


I am very fortunate (or cursed, depending on how frazzled I am when you ask) to be present in my kids’ lives 24/7. Not all fathers can be so available, but that in itself is not evidence I am any better or more committed a father than a dad whose job allows him to be home only in the evening after work, or in between lengthy military deployments. Good dads do what they can, when they can. We’re not Mom, but we’re not just substitutes for her, either.
From Acculturated, 1/28/17
at 12:42:00 AM