Dear Kim Kardashian, Topless Selfies Are Not Liberating You 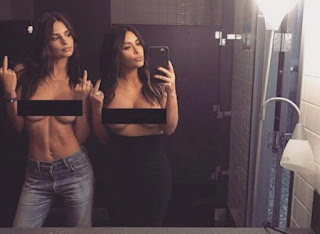 Emily Ratajkowski – of “Blurred Lines” music video fame – and Kim Kardashian – of, well, fame fame – posed together last week for a dual topless selfie that blew up the internet. “We are more than just our bodies,” Ratajkowski captioned the photo, “but that doesn’t mean we have to be shamed for them or our sexuality.” In other words, two young women who launched their careers by sexualizing themselves are tired of being either criticized for it or reduced to sex objects, so they defiantly sexualized themselves again to make that point.
Kim and Emily (Kimily?) have had each other’s (usually bare) back lately in terms of warding off body-shaming and criticism for their compulsive nudity. Emily came to Kim’s defense recently after the latter took heat for getting naked again on Instagram. Emily wrote Kim a supportive note saying, “It's so important that we let women express their sexuality and share their bodies however they choose.” This empowered Kim, who followed up with another nude selfie captioned, “#liberated.”
Some critics, feminists among them, aren’t buying the women’s claims that they are feminists fighting to liberate female sexuality. Those critics reasonably suspect that Kimily are exploiting that excuse and capitalizing on the notoriety. But if sincere, the duo may believe they’re liberating themselves through nudity, but they’re actually digging themselves deeper into the hole they made through excessive nudity in the first place.
Kim Kardashian was introduced to the world through her BFF Paris Hilton, who was the Kim Kardashian of her day. Then Kim eclipsed her friend’s renown by appearing in a sex tape that some claim was shrewdly orchestrated by her own momager, Kris Jenner, who understood the potential of exploiting Kim’s sexuality. Kim has since gone on to become arguably the world’s most famous woman, largely through flaunting her iconic curves and sometimes posing nude.
Emily Ratajkowski first blew up large by cavorting fully naked in the music video for Robin Thicke’s song “Blurred Lines,” a gig she got after Thicke saw her topless on the cover of an erotica mag. That video shot her to the top of the sexiest women list of every men’s magazine. She has since continued to pose topless for magazine covers. In an attempt to move on to more respectable gigs, she secured a small but prominent role alongside Ben Affleck in Gone Girl – in which she seduced Affleck and went topless.
In response to the criticism, Ratajkowski told InStyle, “The implication is that to be sexual is to be trashy because being sexy means playing into men's desires. Why does the implication have to be that sex is a thing men get to take from women and women give up?” But female sexuality is not considered trashy – it’s acting trashy that is considered trashy. She seems to be missing the point that when she puts her sexuality on public display at the drop of a bra, then she is giving it up to every man who looks, and she is courting a trashy reputation. If she doesn’t want that, she needs to keep her sexuality more private.
Especially as a man, my opinion on the topic is easily dismissed as sexist, “body-shaming,” and repressive. “It’s my body, I can do whatever I want with it” is the feminist motto today. But I’m not telling Kimily what to do with their bodies (I’m actually perfectly happy for them to share their sexuality). I’m telling them what they can expect if they persist in getting near-naked for the world. They can expect to continue to be seen as little more than boobs (literally and figuratively) and ass.
“To me, ‘sexy’ is a kind of beauty, a kind of self-expression, one that is to be celebrated, one that is wonderfully female,” Ratajkowski wrote in an essay for Lena Dunham’s website. That’s true – but if she, Kardashian, and others like them truly want to be celebrated for anything besides sexy self-expression, if they want the world to respect them for their other qualities, then a little modesty is in order. When even Miley Cyrus calls you “tacky,” it’s time to rein it in a bit.
This is not just a criticism of women; if a male celeb perpetually presented himself provocatively, occasionally posing for bottomless selfies, he would be considered trashy too, if not perverse. Yes, our media and pop culture relentlessly and shamelessly sexualize young women – the younger the better, tragically – but the way to counter that is not to push the envelope of it while pretending that you’re breaking down cultural barriers about nudity. The way to counter it is to remind our culture something that we all once accepted: that it is possible to be drop-dead sexy without also being trashy.
And as role models, what is the message Kimily are sending to young girls who idolize their beauty and success? Those girls are absorbing the lesson that that Lifestyle of the Rich and Famous is within reach if they too are willing to bare all and/or leak a sex tape. They’re learning that breasts can get them immeasurably further than brains or character.
Sorry Kimily and feminists (Kiminists?), you can’t have it both ways. Of course a woman should have the right to share her body however she chooses – but choices have consequences, and she can’t hypersexualize herself and then complain about the public getting the wrong idea about her. It is incredibly naïve to believe that a beautiful young woman can share topless photos of herself (no matter how artistic or tasteful) with the world, and not have men (and women too, for that matter) feed like vampires off her sexuality.
Should it be that way? Perhaps not, but that’s the way it is; it is human nature, which hasn’t changed in thousands of years, and Kim Kardashian and Emily Ratajkowski aren’t going to pave the way for a cultural paradigm shift through topless selfies. They’re only going to be ogled.
From Acculturated, 4/4/16
at 8:47:00 PM