‘The Producers,’ the Swastika, and the Tyranny of Feelings 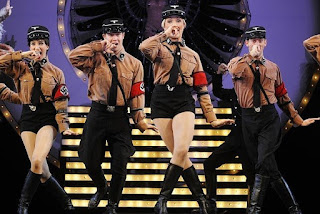 I found it encouraging to hear that students at Tappan Zee High School in Orangetown, New York recently chose to put on Mel Brooks’ hilarious satire The Producers as a school play. An excellent, bold choice. If you are tragically unfamiliar with it, the comedy centers on two theater producers who stage an intentional flop of a musical – the outrageously tasteless “Springtime for Hitler” – allowing them to bilk investors and flee the country. But their best-laid plans go awry when the play becomes a hit.
School authorities have hamstrung the students, however, by decreeing that the play must be devoid of Nazi swastikas, a move that would undermine the satire. Why? For the same reason practically any action is taken in schools these days: some people were offended, including South Orangetown Superintendent Bob Pritchard. “There is no context in a public high school where a swastika is appropriate,” he declared.
Really? Not even in history class? Is he suggesting that, rather than educate students about the symbol and its historical significance, it should simply be banished from their awareness altogether? What if, as the New York Post wondered, the Tappan Zee kids had wanted to stage The Sound of Music or Schindler’s List? Would either of those dramas be as impactful without the oppressive emblem of Nazism looming over the characters?
“I considered it to be an obscenity like any obscenity,” Pritchard sniffed. But the swastika is not like any obscenity. It isn’t even an obscenity in itself, though it represents an obscene ideology. It is a cultural symbol with specific historic meaning, and rather than shield students from it out of a misplaced sense of moral indignation, students should be confronted by it and educated about it. The alternative is possibly to be condemned to repeat the sins committed beneath its image.
B.J. Greco, who handles media for the school district, explained that four parents also had complained about the swastika’s use in the play. “If you come in out of context, you can misinterpret,” he attempted to justify. “The swastika is an icon. It causes different feelings in different people.”
So what? Different feelings can be triggered in different people by just about anything. That is no justification for sending the potentially offending object or image down the Orwellian memory hole, which the “trigger warnings” proliferating on college campuses now are designed ultimately to accomplish. A culture which prioritizes feelings, which are by definition subjective, above reality and reason will soon find itself detached from both and doomed to implode.
As an aside: the comic genius Mel Brooks, who won a Best Screenplay Oscar for The Producers, wouldn’t be able to get a job in entertainment today. Can you imagine the horror with which today’s studios would greet the outrageous racial satire of Brooks’ Blazing Saddles? Our culture has reached a point at which it is impossible to have a sane discussion about race, much less enjoy a politically incorrect comedy about it. Far from helping to close America’s racial divide, the enforced sensitivity imposed upon us by political correctness has exacerbated that divide to an almost unbridgeable degree.
The swastika controversy is reminiscent of the hysteria that swept the country last year over the Confederate flag in the wake of the massacre of nine black Charleston churchgoers by white supremacist Dylann Roof. National anger focused like a laser on what many perceive to be the symbol of American white supremacism, the Confederate flag, which Roof displayed in photos prior to the shooting. Anger became hysteria as the lighthearted 1980s show The Dukes of Hazzard was pulled from the TV Land cable network schedule because its prominently featured Dodge Charger, nicknamed “The General,” sported the flag on its hood. Merchandising featuring the car was even pulled from store shelves. Again, the rather smug impulse was to erase the symbol’s existence altogether as a sign of our moral condemnation.
In related news, Harvard Law School recently caved to student demands that the institution’s longstanding logo be changed to remove an image tied to slavery – because students find slavery offensive and “triggering.”
Yes, of course – Nazism, racism, and slavery are offensive, but this virtue-signaling frenzy to purge our culture of historical symbols deemed offensive, no matter what the context, is not the way to come to terms with those symbols, with the realities they represent, or with the past. If anything, banning them under any circumstances only empowers those symbols and weakens our understanding of them and of ourselves.
Erasing from our cultural consciousness symbols that represent such ugly historical realities is little different from the Islamic State destroying artistic and architectural vestiges of non-Islamic culture because they are offensive to religious sensibilities. It will lead to a cultural and historical amnesia – not to mention further capitulation to this tyranny of feelings whenever someone decides to be offended.

UPDATE: According to Adweek, the news media have distorted the story of superintendent Pritchard banning swastikas from the play. Apparently the swastikas in question were displayed at the school two weeks prior to premiere with no explanation, and Pritchard had them removed for that reason.  The play itself went on uncensored.
As for Mr. Pritchard’s comment that there is no context in which a swastika in high school is appropriate: Atlanta PR exec Scott Merritt forwarded to me an email from Pritchard in which he explains that it was poor wording and did not reflect his full position: “Displaying historical artifacts for the purposes of education in public schools (and universities) should be the norm rather than the exception and I am therefore opposed to censorship,” wrote Pritchard.
I wish to apologize to Mr. Pritchard – a West Point student of military history and self-described Mel Brooks fan – for running with the media’s mischaracterization without confirming the whole story.
From Acculturated, 3/18/16
at 10:17:00 AM