A Gentleman’s Club That Turns Boys Into Men 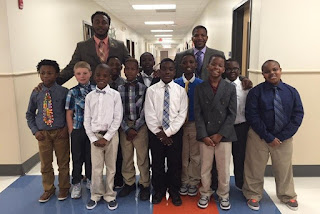 In a trash-talking, reality-show culture that rewards bad behavior and self-promoting arrogance, quiet gentlemen have largely become quaint rarities, charming but outmoded relics of generations past. The news today is dominated by bullying presidential candidates, and the entertainment arena is ruled by foul-mouthed superheroes; unless young boys are taught gentlemanly standards by the males in their lives at home and in their neighborhood, they will be hard-pressed to find role models for them elsewhere in our culture.
Raymond Nelson, the student support specialist at Memminger Elementary in downtown Charleston, South Carolina, isn’t waiting around for our broken culture to right itself. He works with at-risk children, many of whom come from broken homes with no father figure. Grim statistics bear out just what a devastating effect fatherlessness has on boys, who are then more inclined to turn to crime, to take drugs, to drop out of school, and to perpetuate this cycle of failure one day with broken families involving their own children.
Recognizing this, over the recent winter break Raymond Nelson came up with an idea to help the young boys among his students break that tragic chain and become young men better prepared for success at home and in the workplace. He started The Gentleman’s Club.
For once, a “gentleman’s club” is turning boys into men and not the other way around. Every Wednesday nearly 60 students from the first through the fifth grades at Memminger meet to discuss a new topic on etiquette and self-presentation such as how to shake hands, make eye contact, open doors for ladies, and address their elders. Their motto is “Look good, feel good, do good.” They are required to wear ties and jackets, and Nelson has a stash of donated jackets, vests and ties for those boys who don’t have their own. “I was thinking maybe if I have the boys dress for success,” said Nelson, “when was the last time you saw someone fighting in a tuxedo?”
Nelson understands that what you wear affects your attitude and sense of self. With youth fashion tending toward drooping, baggy pants and athletic wear, wearing a suit sets the boys apart as young men. It instills in them a certain sense of seriousness, maturity, dignity, and responsibility, and their behavior changes accordingly. And dressing up affects not only the way they see themselves, but the way others see them as well. “They like the reaction of walking up to classrooms and [hearing], ‘Oh, you look so nice and handsome.’ They just love it,” said Nelson.
But the Gentleman’s Club training goes beyond appearance to include manners, which are also in short supply these days, and to cultivate a sense of chivalry toward girls and women – and God knows that’s largely absent in our culture as well. Because the younger boys are still at the age at which they consider girls to be infected with cooties, Nelson bases his lessons and examples on how they would treat their own sisters, mothers and teachers.
Nelson himself had joined a similar group as a child at his mother's request. “It helped me to be a better man and I could spread the knowledge to the young boys,” Nelson said. “I know a lot of them struggle because a lot of them don’t have men at home, so I just want them to grow up and think of the things that I teach them.”
The seriousness and self-confidence the boys are acquiring in the Gentleman’s Club are also helping them with their schoolwork. “A lot of my students perform well when they know someone cares about them,” said Nelson. In fact, the Club has been so successful at Memminger that Charleston County School District officials say they want other local schools to begin similar programs in their schools.
Our culture is suffering a manhood crisis. The rejection of chivalry as sexism and the decline of gentlemanly standards have left our sons confused about masculinity and led to a corresponding moral degradation of the entire culture. Such standards don’t come naturally; boys must be educated in them and challenged to uphold them, and for that they need role models and teachers like Raymond Nelson. He may be the only such figure in the lives of most of his 60 students. Bravo for him – but how many more boys there must be around the country who, like his students, need a Raymond Nelson to start them on the path to becoming young men.
From Acculturated, 3/3/16
at 11:19:00 AM