What Kind of Male Role Model Would a President Trump Be? 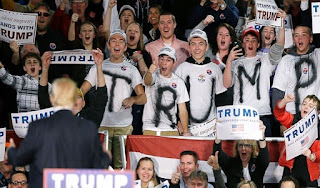 No one in the public eye is currently driving more media attention and polarized debate than presidential aspirant, reality TV star, and billionaire real estate mogul Donald Trump. His arrogance inspires rabid admiration and visceral disgust in equal measure. Many are horrified by the prospect that, as President, the bullying Trump might prove to be a Putin-style authoritarian; many find that same cocky aggressiveness to be electrifyingly, refreshingly virile. This raises an interesting, overlooked question: as a man, what kind of a role model would a President Trump be for our sons?
In her recent City Journal article “Coarsener in Chief,” Heather MacDonald addresses that very question. She is not a fan; after condemning Trump as “the most gratuitously nasty public figure that this country has seen in living memory” and “the very definition of a bully,” she urges his conservative supporters to consider Trump’s “effect on civilized mores”:
Boys in particular need to be civilized. That task will be more difficult with Trump in the White House... Any parent trying to raise a boy to be respectful, courteous, and at least occasionally self-effacing will have a hard time doing so when our national leader is so reflexively impolite, just as it is harder to raise girls to be sexually prudent when they are surrounded by media role models promoting promiscuity. The culture has been coarsened enough already. It doesn’t need further degradation from a president.
Amid quite a few uncivil ad feminam responses from Trump supporters that followed MacDonald’s article were comments along these lines: “For seven years, my family and friends have been waiting for a big, strong man to take center stage and say, "This way, men!" — a man who can provide inspiring leadership for America.” And this one, which seemed to sum things up nicely:
I wish Ms. Mac Donald had avoided making this into an issue where nasty, loutish boys must be “civilized.” Frankly, one of the problems we have been facing for the last half-century is the feminization of society... Because the pendulum has swung so far in that direction, a loudmouth buffoon like Trump seems authentic to a surprising number of people.
Those commenters won’t get any argument from me about the feminization of America, a half-century process (since the beginning of second wave feminism) which has left too many young American men in a state of confusion and helplessness about the definition and proper ideals of manhood. Nor would I deny that America is sorely in need of an inspirational leader in the White House who exudes strength and confidence and can restore American superpower. But are they correct that our current state of affairs makes a “loudmouth buffoon like Trump” seem authentically masculine? Is boorishness the mark of a leader of men? While I don’t think Trump’s quiet competition for the presidency, Dr. Ben Carson, is presidential material, is he any less manly because he doesn’t resort to bullying or trumpeting (pun intended) his impressive achievements?
Manliness is many things, and a fair subject for debate, but at its core, the basic ideals of manliness are simple: it is confidence, not loudmouthed cockiness. It is humility – not weakness, but humility – and service, not egotism and self-aggrandizement. It is chivalry, not bullying. It is leadership, not demagoguery. It is maturity and wisdom, not pettiness. Navy SEALs, whom no one would argue are feminized or unmanly or pushovers, are the epitome of such masculine characteristics.
These qualities today, along with manners and gentlemanliness, are too often considered old-fashioned and passé, and they are confused with weakness. Pop culture today, from the concert arena to the sports arena, sadly celebrates the brash, the egotistical, and the self-promoting, while the strong but quietly humble get overlooked. That doesn’t make the former manlier. Arrogance does not equate to masculine strength. If anything, arrogance proves to be nothing more substantial than bluster when the chips are down.
Heather MacDonald is correct that boys need to be civilized as they are raised (although these days girls, who are surrounded by all the wrong kinds of feminist role models, seem to need a strong civilizing influence themselves). But while our culture currently strives to sand down the rough edges of boys too far, there is a difference between civilizing boys and feminizing them. Too many of the commenters beneath MacDonald’s article, who seem eager to have a crass American Putin in the Oval Office, don’t seem to understand that, and that is an alarming commentary on our cultural confusion about manhood.
From Acculturated, 2/5/16
at 7:04:00 PM