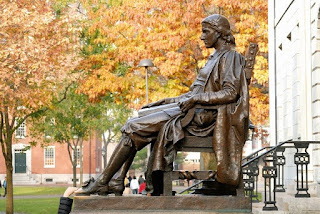 In 1987, Allan Bloom’s bestselling book The Closing of the American Mind described how higher education was failing our students and “impoverishing their souls.” Bloom doubted that our colleges and universities could ever reestablish the ideal of a classically liberal education. Sadly, even as academically esteemed an institution as Harvard seems to be proving his skepticism right.
In a recent interview with political pundit William Kristol, former Harvard President Lawrence Summers complained that a “creeping totalitarianism” is casting a pall over our institutions of higher learning, Harvard included. As administrators and students obsess over safe spaces and microaggressions, educational excellence is being degraded by a “growing preference for emotional comfort over academic inquiry.” Schools are coddling a generation of militantly sensitive students while promoting a politically correct orthodoxy that stifles intellectual freedom.
In one example Summers mentions, “Holiday Placemats for Social Justice” appeared in a Harvard undergraduate dining hall last December. Created by the College’s Office for Equity, Diversity, and Inclusion, the placemats promoted social justice talking points for students to share with loved ones over the holidays, no doubt making for many an awkward Christmas dinner. The talking points included such messages as “Racial justice includes welcoming Syrian refugees.”
The placemats outraged alumni. Eighteen representatives complained in a letter that “We do not think the offices of the university should be in the business of disseminating ‘approved’ positions on complex and divisive political issues.” University President Drew Faust weighed in as well, calling the placemats “a really bad idea”:
“I don’t think the University should be directing people—students, staff, faculty—what to say or what to think. The University is a place that ought to foster robust discussion and disagreement, and welcome all perspectives, and that did not seem to be consistent with the message of the placemats.”
Exactly. The administrators responsible for the placemats issued an apology, but the PC push continues at Harvard on other fronts because, as Summers complained, some administrators have been “emboldened” to see this as “their moment to establish a kind of orthodoxy.”
One of those who is seizing that moment is Rakesh Khurana. Harvard’s undergraduate dean since 2014, Khurana seems determined to implement a social justice agenda. He brought an end, for example, to the decades-old title of “house master” – for a male faculty member who oversees a dormitory – over the perception that the term resonates of slavery (will “master of arts” be targeted next?). Khurana wrote that the change was made “to ensure that the college’s rhetoric, expectations, and practices around our historically unique roles reflects [sic] and serves [sic] the 21st century needs of residential student life.”
But Khurana seems to be determining for himself what those needs are allowed to be. Now he is angering alumni by pressuring – some say coercing – the school’s all-male “final clubs” to accept women. Final clubs are off-campus undergraduate social clubs that sprang up after Harvard banned traditional fraternities in the 1850s. They have no formal relationship with the school, but Khurana contends that they are exclusive, elitist, and not “appropriate” for the university. He has asked such groups to consider whether their values “align” with the school’s mission.
And what is that mission? According to its website, it is “to educate the citizens and citizen-leaders for our society.” It seems more likely that Khurana’s issue with the clubs is not that they fail to align with this mission, but that – as an all-male tradition – they are an impediment to social justice.
“The role of single-sex groups on campus should be decided by students, not administrators,” said one alumnus. “Harvard should stand for intellectual freedom and open debate and should set a clear precedent of protecting minority viewpoints — especially those viewpoints with which the current administration disagrees.”
But at least two of the eight all-male clubs at Harvard have already bowed to Khurana’s reported “veiled threat” of expulsion and decided to accept women. No word on whether he will go after the five all-female final clubs.
Bartle Bull, a 1964 Harvard graduate and self-described liberal, said that the administration is “working against diversity, tolerance, and the freedom of association.” “Harvard as an institution has been more and more controlling in the name of liberalism,” said Bull. Another alumnus wondered, “What kind of values are they trying to impose on students?”
The answer is that schools now are passionately committed to tolerance and diversity in every way except intellectually. Political correctness enforces identity politics but is intolerant of debate, dissent, alternative viewpoints, and criticism. The Harvard College “About” web page boasts that the school encourages “intellectual risk-taking.” But the creeping social justice totalitarianism Lawrence Summers laments suppresses any intellectual growth at all, much less risk-taking.
Nearly 30 years after Allan Bloom’s book, our colleges and universities are no closer to reopening the American mind.
From Acculturated, 2/3/16
at 2:46:00 PM