Should ‘Gone with the Wind’ be Banned? 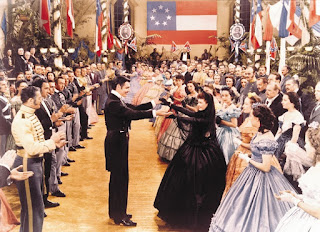 This Tuesday marked the anniversary of the 1936 publication of Margaret Mitchell’s Civil War-era epic Gone with the Wind, one of the bestselling novels of all time, which also became one of the most beloved movies of all time. But in light of its nostalgic view of Southern slave-owning society, has this classic become a racist relic that must be shunned in our time?
Gone with the Wind has sold tens of millions of copies. Its author Mitchell won the 1937 Pulitzer Prize for Fiction, and the David O. Selznick-produced film starring Vivien Leigh as tenacious Atlanta belle Scarlett O’Hara and dashing Clark Gable won eight Oscars (out of 13 nominations) and is still the most successful film in box office history (when adjusted for inflation). It was number six on the American Film Institute’s 10th Anniversary Top 100 American Movies of All Time in 2007. Up until a week or so ago, few people would have denied it that celebrated place in history and in the hearts of movie lovers everywhere.
But that was before the shocking massacre of nine members of an historically black church in Charleston, South Carolina, at the hands of a white supremacist. In the wake of that atrocity, public revulsion for the Confederate battle flag, with which the murderer had posed in personal photos, led to hysteria about banishing that symbol of American slavery from view – no matter where or in what context it was found.
Not only were there calls to remove it from government building flagpoles across the South, but Amazon, eBay, and retailers from Sears to Walmart banned merchandise with its image. Apple withdrew historical video games and apps featuring the image from circulation. Even more irrationally, TV Land pulled reruns of The Dukes of Hazzard from its lineup, and the replica iconic car from that 1980s show, with a Confederate symbol on its hood, will no longer be sold.
The rush to put a “banned-aid” on America’s re-opened racial wounds didn’t end there. The New York Post’s Lou Lumenick wrote an op-ed last week titled, “‘Gone with the Wind’ should go the way of the Confederate flag,” in which he argued that,
If the Confederate flag is finally going to be consigned to museums as an ugly symbol of racism, what about the beloved film offering the most iconic glimpse of that flag in American culture?
While not “as blatantly and virulently racist as D.W. Griffith’s Birth of a Nation,’’ Lumenick wrote, Gone with the Wind’s “more subtle racism’’ is even “more insidious,” romanticizing as the movie does the institution of slavery, and painting the Civil War as a noble lost cause.
Lumenick acknowledges the great qualities about GWTW, including “its gorgeous Technicolor photography and its unforgettable performances” not only by Leigh and Gable but by Hattie McDaniel, the first black performer to win an Oscar. But he wonders, “[W]hat does it say about us as a nation if we continue to embrace a movie that, in the final analysis, stands for many of the same things as the Confederate flag..?”
While not calling for an outright ban on the film, he concludes that this “undeniably racist artifact” should be consigned to the dust heap of history along with the Confederate flag. I’m reminded of efforts to do the same with the novels of Mark Twain because they feature characters who casually use the N-word, which was in common use at the time but which virtually everyone but the rap industry and marginalized pockets of white trash finds abhorrent today.
Thankfully, Lumenick’s argument and such extreme examples of excising the Confederate battle flag from history were met largely with cries of disapproval, and even with accusations that they resembled Orwellian-style revisions of history.
History is what it is – or rather, what it was. We cannot change it, obviously, but neither should we deny it, rewrite it, or delete “unacceptable” aspects of it from our cultural consciousness. Even as just a symbolic response, condemning educational Civil War games, The Dukes of Hazzard, and Gone with the Wind in response to the Charleston shooting was a childish and pointless gesture.
This is not to say that each of us shouldn’t be allowed to make our own moral judgments of art, as well as aesthetic ones. But there is a danger in banishing works of art of which ruling elites have capriciously declared that we should no longer approve. We must have the sense and sensibility to recognize that historical novels or movies are born of their time and place.
To expect works of art to conform to politically correct sensibilities, and to remove them from sight when they do not, is a cowardly and even totalitarian act which also exposes a fear and incomprehension of art. To allow shifting socio-political blind spots to obscure our vision leaves us all less enlightened about not only the past, but ourselves.
From Acculturated, 7/2/15
at 1:51:00 AM