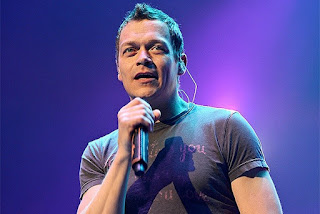 Chivalry may not be dead, but it says quite a bit about the status of its health when a public example of it draws such attention and inspires such polarized responses as one instance did last week.
Alt rock band 3 Doors Down was playing to a full house in Broomfield, Colorado, when something caught frontman Brad Arnold’s eye that incensed him. He abruptly stopped his bandmates in mid-song before addressing someone in the audience near the stage.
“Hey, hey, homie, you don’t hit a woman,” he said angrily as the stunned audience listened. “You just pushed a woman out of the way to get in a fight, you d*ck.” (Arnold later apologized to the crowd for his uncharacteristic profanity.)
When concertgoers realized he was calling out a man for abusing a woman, they erupted in cheers. But Arnold wasn’t done: “Get him the hell out of here,” he ordered security. He then said something else that was lost in the concert noise, before forcefully reminding the man in the audience: “You don't hit a woman, dude.”
The band’s guitarist Chris Henderson shared a video clip of the incident online – it’s been viewed well over 2.5 million times – and later released a statement to E! News, which read,
You see people fight in the crowd all the time. In the past Brad has said for people to calm down and love each other but this was ultra aggressive in our eyes. It was so aggressive that he stopped the show for the first time in 15 years to address it head on with the guy.
The reaction to Brad Arnold’s very public scolding was generally supportive, and rightfully so. After all, he had not only interrupted his own show to come to the defense of a woman who was being roughed up, but he had sent a loud and clear message to everyone in his audience – and to anyone who saw the video clip online or read about it – that it is simply wrong for men, who are generally bigger and stronger, to hit women. “That's why I posted [the video],” Henderson said. “I thought it was chivalry at its best."
But not everyone was impressed by Arnold’s honorable gesture. The commenters beneath online articles about the incident fall into three categories, as they always do when chivalry is the topic: those who cheered the fact that the rumors of chivalry’s death are greatly exaggerated, to paraphrase Mark Twain; egalitarians, both male and female, who assert that no one should hit anyone, man or woman; and those who angrily reject the notion that a man should ever come to the defense of a woman.
That final category includes radical feminists but more often a subset of men’s rights activists who call themselves Men Going Their Own Way (MGTOW). It’s impossible to know how large a community they are, but the more disturbingly angry and misogynistic members are becoming increasingly vocal on the internet, and their opposition to chivalry is positively rabid.
For example, one such commenter at Breitbart.com snarled about Brad Arnold, “What a pathetic white knight. Such woman protectors like him are the feminist filth that turned the country into the misandrist mess it is now.”
(In MGTOW terminology, the formerly heroic symbol of the “white knight” is now a contemptuous label for “beta males” who treat women with deference and respect. MGTOW blame white knights for aiding and abetting the feminism they so despise for ruining their world.)
That same commenter linked to an internet placard called Hurt Feminism by Doing Nothing, which is not an official MGTOW motto but pretty adequately sums up their attitude toward chivalry:
Don’t Help Women
Don’t Fix Things for Women
Don’t Support Women’s Issues
Don’t Come to Women’s Defense
Don’t Speak for Women
Don’t Value Women’s Feelings
Don’t Portray Women as Victims
Don’t Protect Women.
“Without White Knights,” it concludes, “Feminism Would End Today.”
To give you even more explicit evidence of the attitude of such self-proclaimed “alpha males”: on a Reddit thread about the 3 Doors Down incident, one commenter was even more obscenely incensed by Arnold’s actions than Arnold himself was about the guy he scolded:
Does no one realize sometimes a b*tch deserves it? F*ck these white knight pr*cks. I'm going to go [here he inserts a very colorful expression that describes using a woman for selfish sexual gratification and then dumping her] some slut at a bar this weekend just to balance the karma.
It would be easy to dismiss such viciousness as the bitter ravings of a few internet bullies who can’t get a date, except that these (admittedly extreme) examples are indicative of a broader male frustration, confusion, and resentment about what manhood means today and the role men should play in a world radically changed by feminism. The attitude that “chivalry is nothing but male stupidity,” as one MGTOW commenter asserted, has become tragically all-too-common.
In a culture that has bred such an attitude among too many men, the chivalry that Brad Arnold expressed instinctively is in diminishing supply. It is a quality of character that needs not just celebrating, but cultivating.
From Acculturated, 7/23/15
at 9:20:00 AM