What Memorial Day is About 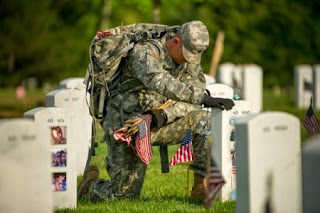 Last Friday, as the week downshifted into the Memorial Day three-day holiday, the official Twitter account of the Democratic Party wished the country a “Happy Memorial Day weekend, everyone!” and tweeted a pic of – whom else? – President Obama lapping at an ice cream cone while media lapdogs zoomed their cameras in to capture the photo op. CNN anchor Jake Tapper injected a note of perspective by tweeting back, “Respectfully, @TheDemocrats, this is not what Memorial Day weekend is about.”
Indeed it is not, but for Barack Obama, of course, everything is about Barack Obama. And for the Democratic party, everything is about selling the American people a crock of big-government idolatry, and so they followed up the Obama photo with tweets about a 15% off holiday sale at their website store – because nothing memorializes the men and women of our armed forces who paid the ultimate price for their country quite like a discounted “I Heart O’bama” Shamrock Lapel Sticker or a “Like a Boss” POTUS t-shirt.
This all came in the wake of the fall of Ramadi in Iraq to the demonic forces of ISIS – you know, the JV team that has absolutely nothing to do with Islam. In the early years of the war in Iraq, more American lives were lost in the intense fighting to secure the province of Anbar, which includes Ramadi and Fallujah, than anywhere else in the country.
Now our warriors who survived that fighting, and the families and friends of those who didn’t, are watching ISIS reclaim Iraq and are wondering what that sacrifice was for. It makes the loss of their loved ones and brothers-in-arms painful all over again. But not to worry – Obama has declared the fall of Ramadi a mere “minor setback”; meanwhile he and the Democratic party, who have worked assiduously to undermine America’s war efforts and to gut our military, urge you to celebrate a “Happy Memorial Day!” and enjoy your ice cream and BBQ.
In the very same month in 2004 when American warriors faced escalated attacks in Ramadi and Fallujah, my 81-year-old father Roger E. Tapson, a former U.S. Army Staff Sergeant and veteran of World War II, died in Sherman, Texas. He was buried near a small lake in the rolling, pastoral grounds of the Dallas-Ft. Worth National Cemetery alongside thousands of other veterans. There, those veterans, as poet Stephen Spender might say, are “feted by the waving grass, and by the streamers of white cloud, and whispers of wind in the listening sky.”
That cemetery is exactly the kind of place my dad would have described – without a hint of New Age devaluation of the word – as “spiritual.” It was the way I once heard him describe a still, brisk, early autumn morning on a gorgeously wooded golf course, his favorite place to be.
Spiritual indeed. To stand in a military cemetery among the unadorned, uniform white markers that stretch out in precise rows like an army-in-waiting, is to feel a spiritually heightened quality to your surroundings that demands humility, gratitude, and a more solemn reverence. You can feel that – to quote Spender once again – the fallen warriors have “left the vivid air signed with their honor.”
This is not to diminish the final resting place of anyone interred in civilian burial grounds, but the “vivid air” of a military cemetery is undeniably suffused with something extra, because it’s not merely a graveyard, but a memorial to qualities that constitute the best of humanity – honor, courage, dignity, service and sacrifice – and to warriors who once embodied them. Their grave markers stand as a challenge to those of us who remain.
Honor, courage, dignity, service, sacrifice – how many of us civilians can say that we commit to embodying those qualities in our daily lives? How many of us can say we are truly tested, body and soul, ever, much less on a daily basis, the way that the men and women of our military have been, and continue to be? How many of us can say we are ready and willing to do what is required for our country and our fellow Americans, even at the cost of our lives? Precious few if any, I would guess, and we civilians are all the lesser mortals for it.
That makes us all the more fortunate that there are Americans who can and do rise to that challenge on front lines around the world. It takes a special person to embrace that responsibility and earn a uniform of the United States armed forces, and it takes a special family – warriors too in their own way (“they also serve who only stand and wait,” as John Milton wrote) – to support their loved one from the home front.
That is why Memorial Day is not about ice cream and BBQs. It’s certainly not about Barack Obama, a man who has done more to diminish America’s standing, power, and military than any single figure in American history. It’s not a time to celebrate. It's a day to be humbled and grateful that the men and women of the United States military have the rare and noble qualities it takes to be a sword between us and America’s enemies – when our government officials let them. It’s a time to honor the warriors who have purchased our freedom and rights and prosperity with their lives.
And this year in particular, it’s a time to meditate on the challenge that those fallen veterans have left us civilians: the challenge to do our part, to earn what our veterans have handed us, and to be warriors ourselves on the home front, so that their hard-won victories and sacrifices were not for nothing.
(This article originally appeared here on FrontPage Mag, 5/25/15)
at 11:12:00 AM