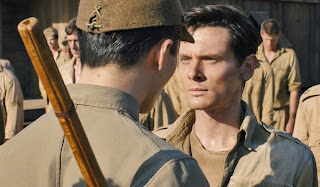 Last weekend I finally had the chance to see the Angelina Jolie-directed movie Unbroken, now out on DVD. I’ve been eager to see it ever since reading the inspirational bestselling book by Laura Hillenbrand on which it was based. But as most people will agree, a movie is almost never as good as its book, and unfortunately, that’s true of Unbroken as well.
MILD SPOILERS AHEAD
Unbroken is about the extraordinary true life story of Louie Zamperini, an American Olympic runner whose bomber ditched in the Pacific Ocean during World War II, stranding him and a fellow flyer on a life raft for an astonishing 47 days. At one point during the ordeal he despairs so greatly that he promises to devote his life to God if only He will allow him to survive.
Finally the two flyboys, both on the verge of starvation, are “rescued” by the Japanese and sent to a prisoner-of-war camp. There Louie becomes the obsession of a particularly sadistic camp guard named Watanabe, who is hell-bent on breaking the strong-willed American. He doesn’t, though he pushes Louie to the point of fantasizing about killing him. Eventually the war ends and Louie returns home to his loving family, unbowed and unbroken.
Moment by moment it’s a riveting film, but something feels missing overall. The movie’s theme – “if you can take it, you can make it” – is an encouraging catchphrase but not especially inspirational or uplifting. Louie certainly exhibits grit and defiance, but survival alone doesn’t seem like enough of a triumph to hang a $65 million movie on.
So what’s missing? The book Unbroken is subtitled “A World War II Story of Survival, Resilience, and Redemption”; in the film, there most assuredly is a lot of survival and resilience – but where is the redemption? In title cards before the movie’s credits roll, the audience is told:
After years of severe post-traumatic stress, Louie made good on his promise to serve God, a decision he credits with saving his life. Motivated by his faith, Louie came to see that the way forward was not revenge, but forgiveness.
Wait, what? There sounds like a great deal more to Louie’s story than his relentless will to live that we saw onscreen. And if you read the book, then you know that there is a great deal more: Louie’s struggle with alcoholism, his murderous anger toward Watanabe, his Billy Graham-inspired conversion to Christianity (which you can read about here, although I highly recommend the whole book itself), and his ultimate epiphany that, as the title card says, forgiving his captors, even the vicious Watanabe, trumps killing them in revenge.
Disappointingly, none of that made the transition to the big screen version except in the brief mention prior to the credits. Granted, filmmakers can’t cram a whole book into a 2-hour movie, but Angelia Jolie’s choice to limit the story to Louie’s survival of external challenges misses an opportunity to depict what might have been his more compelling internal victories.
I was reminded of two similar films that are more complex and thought-provoking than Unbroken. The first is a fascinating little 1983 film called Merry Christmas, Mr. Lawrence, starring singer David Bowie in another true-life adaptation as a WWII prisoner in a Japanese camp. Like Louie Zamperini, Bowie’s character was the focus of an obsessive officer named Yonoi (played by one of my favorite film composers, Oscar-winner Ryuichi Sakamoto, who won the BAFTA Award for Best Film Music for the film’s soundtrack).  But it’s less a film about survival than the clash of Eastern and Western concepts of honor and discipline.
Even better is To End All Wars, a 2001 movie written by my close friend Brian Godawa and starring Kiefer Sutherland and Robert Carlyle. This movie too was an adaptation of a true World War II story about Allied prisoners in a brutal Japanese work camp, but its spiritual insights transcend Unbroken’s more humanistic message. As Philip Yancey put it in Christianity Today,
To a man, the prisoners clung to the desperate hope that their life would not end in a jungle prison but would resume, after liberation, back in Scotland or London or wherever they called home. Yet, even if it did not, they would endeavor to build a community of faith and compassion in the days they had left. For them, God was more certain than death.
It’s an underappreciated but extraordinarily moving tale of sacrifice, redemption, hope and forgiveness whose emotional power utterly dwarfs that of the movie version of Unbroken. If you haven’t yet seen the latter, read the book instead and hunt down To End All Wars.
(This article originally appeared here on Acculturated, 5/5/15)
at 11:25:00 PM