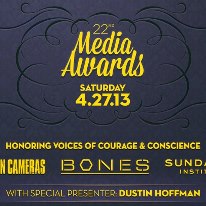 The Hollywood Bureau of the Muslim Public Affairs Council (MPAC) had its 22nd Annual Media Awards Gala last Saturday at the Hilton in Long Beach, California, bringing together “American Muslims, TV and film studio executives, public officials, interfaith leaders, and media professionals to celebrate our honorees’ achievements in using the arts to foster positive social change.” “Positive social change” in this context is Muslim Brotherhood-speak for “the fundamental transformation of American culture.”

MPAC’s busy Hollywood Bureau, established shortly after 9/11 and sharing the Brotherhood’s subversive ideology, claims to serve as a professional resource to the entertainment industry by providing accurate information on Islam and Muslims. It has consulted with the producers of such TV shows as 24, Bones, Lie to Me, 7th Heaven, The Good Wife, and Homeland. It offers script consultation (read: approval) for filmmakers who want to get Islam “right,” and helps Hollywood professionals connect with Muslim filmmakers, writers and actors.
For the past 21 years, MPAC has honored “Voices of Courage and Conscience” who use art and media “to create accurate portrayals and enriching dialogue around important social, cultural and political issues.” A few of the “accurate and enriching” artists and their works that MPAC has honored with awards in the past are filmmakers Michael Moore (for Bowling for Columbine) and Spike Lee (for Malcolm X), producer Lawrence Bender (for An Inconvenient Truth), George Clooney’s production company (for the morally inverted Syriana), and actor Alec Baldwin (“for his courageous commitment to social justice and civil liberties, and for standing up against violations of Muslims’ civil liberties in national media interviews and at the 2004 Democratic National Convention”).
This year, MPAC honored three projects: the Oscar-nominated 5 Broken Cameras, the Fox TV series Bones and the Sundance Film Institute’s Feature Film Program.

5 Broken Cameras is described as a “harrowing portrayal of Palestinian daily life under Israeli occupation.” Sounds accurate and enriching already. Co-created by Palestinian filmmaker Emad Burnat and Israeli filmmaker Guy Davidi, the 2013 documentary is an account of nonviolent “resistance” in a West Bank village surrounded by Israeli settlements. “I got the idea,” Burnat said after accepting his award, “to make this film from one of my friends who said, ‘Why don't you make a film about us, who live here? You know how it is to live under the pressure, under the army, under the occupation.’”

Perhaps Burnat and his Israeli partner’s next film could focus on the pressure that Israeli citizens experience in their own land, from an invented people who assault them with everything from rocks to rockets, from obsessive media distortion, and from the coordinated international condemnation of Jew-hating leftists and Arab nations, who want to wipe Israel from the map. But then, films like that don’t win awards.

Another honoree, the TV series Bones has featured a Muslim as one of its recurring characters for the last five seasons. “Committed to introducing diverse and underrepresented narratives,” says MPAC’s website, Bones “embodies the emerging diversity in portrayals of Muslims on screen and television. The character ‘Arastoo Vaziri’ is a rare counter to the pervasive negative stereotypes which have come to define such portrayals.” The announcement doesn’t give any examples of “pervasive negative stereotypes,” probably because MPAC would be hard-pressed to find any in the post-9/11 entertainment world, which has bent over backwards to avoid offending Arabs and Muslims.

Even before MPAC’s Hollywood Bureau, the Muslim Brotherhood legacy group CAIR, the Council on American-Islamic Relations, worked hard to steer Hollywood productions toward more and more sanitized depictions of Islam and Muslims. At a White House rally almost exactly a year prior to the 9/11 attacks, CAIR’s executive director asserted that “Hollywood has not been our ally. Hollywood has distorted the facts. Hollywood has shown freedom fighters as terrorists. Hollywood has done the work that Zionists could not done [sic].” But since 9/11, Hollywood has indeed been CAIR’s ally.

Accepting the awards for Bones were writer Keith Fogelsong and actor Pej Vahdat, who plays Arastoo Vaziri. “Thank you FOX for giving me something that I can relate to as an American Muslim,” said Vahdat. “A part that’s not a terrorist.”

Founded by actor Robert Redford, the Sundance Film Institute’s Feature Film Program offers “professional and creative resources to artists in Muslim-majority countries.” It promises “to tell the stories of diverse and underrepresented peoples and to alleviate the distorted images of regions of the world that are largely misunderstood.” In this context, “distorted” and “misunderstood” mean “in desperate need of a PR makeover.”

MPAC Senior Adviser Maher Hathout closed the event by thanking all the honorees for being “an oasis in the large desert of mass mislabeling, prejudices and biases.” Speaking of prejudices and biases, Hathout, who has close ties to the Muslim Brotherhood, has characterized Palestinian suicide bombings against Israel as “very understandable”; he has supported attacks by Hezbollah, whom he calls “freedom fighters”; and he has called Israel a land of “butchers” who have imposed “racist apartheid.” Regarding MPAC’s 25-year existence, he said at the gala, “We are knocking on the doors of the future and God willing it will open really wide for our new generations to step in, into a better, kinder, gentler, more creative, more just and more fair America.”