MSNBC Host on the War on Terror: America Needed a Racial Enemy 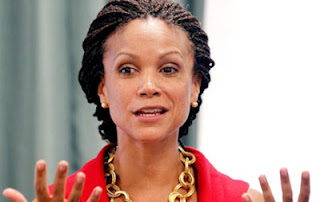 Speaking Monday at the Take Back the American Dream conference in Washington D.C., MSNBC host Melissa Harris-Perry shared an interesting progressive perspective on our response to the 9/11 attacks: namely, that they gave the United States the opportunity to once again wreak “horrific racial violence” against an imaginary enemy.
The three-day Take Back the American Dream Conference 2012 is a creation of former New Left radical Robert Borosage, founder, director, president and/or board member of various progressive organizations like the Institute for America’s Future and the Campaign for America’s Future (CAF), the organizers and hosts of the conference. CAF describes itself as “the strategy center for the progressive movement.” In addition to speakers like Borosage and Melissa Harris-Perry, the conference boasted leftist rock star Van Jones.
Ms. Harris-Perry, or Harris, or Perry – let’s just say MHP, as she goes by on her website –anchors the weekend Melissa Harris-Perry Show on the leftist mouthpiece MSNBC. A former neighbor to now-President Obama, MHP is also a Tulane Professor of Political Science, having previously served on the faculties of the University of Chicago and Princeton University after studying at Wake Forest, Duke and even seminary.
There must be something in the rarefied air of such prestigious academic institutions that renders its intellectuals incapable of acknowledging the reality that lesser mortals easily grasp. One doesn’t have to have a wall full of academic honors to see that on 9/11, America was attacked by a very real enemy who had openly declared war on us, had been waging it for many years before 9/11, and have been ever since. Apart from rabid conspiracy theorists and the lemmings brainwashed by the fact-challenged hatemongers at MSNBC, the average American sees this truth clearly. But progressive professors who aren’t satisfied with the simplicity of Occam’s Razor feel compelled to abandon inconvenient facts and shoehorn the sweep of history into their race-obsessed, anti-American theoretical constructs.
Thus for MHP, the obvious reality that Islamic fundamentalists are waging war against us isn’t enough. For her, former President Bush’s War on Terror (which the Obama administration briefly renamed “Overseas Contingency Operation” before settling on “Mission to Win the Hearts and Minds of the Victims of Our Islamophobic Colonialism”) was not a justifiable response to deadly aggression, but racist warmongering. She noted that

Americans of course responded in very typically American ways to [terrorism], something that many people in the rest of the world had already experienced. We began with a kind of nationalist fervor that was justified as reasonable patriotism.
I’m not sure how responding militarily to an act of war is “very typically American.” Perhaps it’s because Americans don’t take lightly the murder of thousands of our fellows on our own soil, and we don’t suffer bullies gladly either. These and a “reasonable patriotism” would seem to be positive national attributes to anyone except a leftist who views America as the world’s bully.
MHP remarked that this “nationalist fervor” was similar to “post-traumatic stress disorder.” She paused here for a smirking aside, which got a big laugh from her smug, starstruck audience:
I’d like to point out that we clearly must have been having post-traumatic stress disorder, because for about a year after September 11th, there were African-American men walking around the city of New York with NYPD hats on. That can only be explained as a PTSD response.
On the contrary, it’s very easily explained as a symbol of patriotic solidarity with the courageous NYPD and NYFD first responders, both black and white, hundreds of whom lost their lives at the WTC (and many, many more injured). But that doesn’t fit the racist paradigm of leftists like MHP who are incapable of seeing any blacks as proud Americans or as individuals who don’t subscribe to the left’s identity politics. For MHP, all New York black males must be resentful, distrustful victims of police brutality and racial profiling, and so any deviant behavior on their part, like expressing support for the police, can “only” be explained as some sort of mental disorder.
MHP – who, like Obama, is half-white but rejects that part of the equation – went on to assert that America “typically needs… a racial enemy”:
Americans in part identify who we are, and who deserves what, through our notions of whiteness and of the racial enemies that are the non-whites.
“Our notions of whiteness.” “Non-white racial enemies.” These are the fantasies of a progressive academic like Zinn or Chomsky or MHP who sees everything through the distorting lenses of race and anti-Americanism. If America goes to war with a “non-white enemy,” it must be because we are racist – not because they are openly supremacist aggressors who attacked us first, such as the Imperial Japanese or jihadists. (Funny how progressives neglect to call out our enemies on their blatant racism.)
And in this moment, the new racial enemy became not so much Reagan‘s “welfare queen,” who was imaginary, but instead this imagined “other” that is somehow Muslim, or Arab, or Sikh, or something else.
I hardly know where to begin breaking down this breathtakingly ludicrous statement. How is our enemy “imagined”? Did we merely imagine 9/11? The Fort Hood massacre? The WTC bombing in ‘93? And “somehow Muslim or Arab, or Sikh, or something else”? I have news for MHP: there’s overwhelming evidence that our avowed enemy is not “somehow” Islamic, but extremely Islamic and hellbent on making the rest of the world so.
As for America’s need for a non-white enemy, MHP ignores the inconvenient fact that Islam is not a race, and that white Americans like Anwar al-Awlaki and Adam Gadahn have been some of our most prominent Islamic foes. It is just a contemptuous smear on her part, utterly divorced from reality, to claim that America – and let’s call it like it is: she’s talking about white America – is only lashing out in some aimless, racist way at an innocent “other.”
But that doesn’t stop her from labeling Americans throughout history as murderous racists:
We became willing to stomach a kind of horrific racial violence in the name of national security. It is something that we have been willing to stomach as a people over and over again in our history.
Melissa Harris-Perry is an accomplished academic. What that means is, she has mastered the art of twisting history into the perverse progressive worldview, to which Obama subscribes, that white America is the racist, imperialist aggressor against, and exploiter of, the always innocent Third World “other.” It’s a hateful insult to all Americans – especially the victims of “imaginary” jihad.
(This article originally appeared here on FrontPage Mag, 6/25/12)